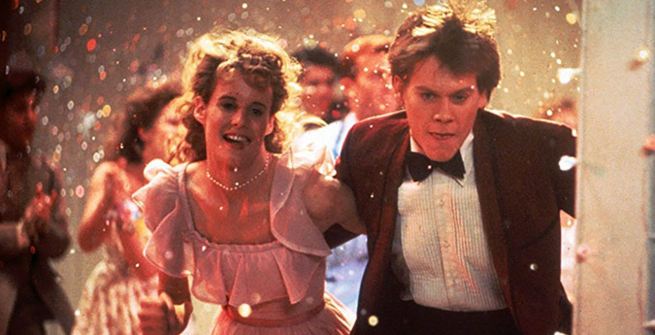 Ren (Kevin Bacon) likes to dance, which is enough to fuel conflict in a small town that bans such a thing.  Coming from big city Chicago, Ren is mystified by Bomont’s puritanical tradition, put in place by Reverend Shaw (John Lithgow).

Shaw’s coming from a place of genuine concern.  The town is full of reckless youth, kids who don’t know what to do with their time so they joust with large, dangerous tractors.  In one of these games of chicken, several kids were killed.  Only then did Shaw and the city council put the ban in place, fearful that such jovial behavior might further endanger their children.

It’s easy to forget how silly this all is because the fears and desires which motivate character decisions are grounded in reality, and the inter-generational struggle is timeless.

The characters are all pretty well-developed and three dimensional save for the evil ex-boyfriend character who is only there to get what’s coming in the end.  Ren is idealistic, brash but empathetic as well.  He bumps into a cowboy-hat wearing Chris Penn on his first day in school, and after a few tough words they become fast friends.  In the middle of the film there is a training montage in which Ren teaches the shy Penn how to dance.  He’s quite good.

Ren develops a relationship with Reverend Shaw’s daughter as well.  She’s the one with the evil boyfriend who becomes the evil ex-boyfriend.  What makes him so evil, beyond his general insecurity and quickness to fight, is his inability to change with the times.  This is what makes him the film’s ultimate antagonist after Reverend Shaw demonstrates that he can, in fact, change with the times.  He may be conservative in nature, but he’s not stubborn.

In some movies you need the antagonist to double down and become a seemingly unstoppable force for the hero to overcome.  The more imposing the bad guy, the more the hero must rise up to defeat them.  But in Footloose, Shaw starts as the imposing villain, an angry, loud preacher who decries everything the hero stands for, but as the film rolls on, we break through that exterior and see the human underneath.  He softens and shows that he is willing to listen.  This only comes after he can acknowledge that his push for the dancing ban comes from a place of fear.  The devil is not in the movements but rather in himself.

At least, that’s what he says to a group of people burning books that don’t support their supposedly Christian values.  These are much more broad characters who only exist to show the one extreme which Shaw could potentially devolve into.  In comparison to them, Shaw is a saint.  He makes it clear that he doesn’t want to label things as evil just for the sake of name calling.  He sincerely believes dancing will corrupt the souls of the town’s teenagers, while the book burners only do so because it fits their agenda, their narrow world view and boosts their ego.  ‘I’m right, they’re wrong,’ while Shaw is able to put that aside and get out of his own way by the end of the story.

So a conventional action movie, something with a hero and villain, will build the villain up, making them more sinister and powerful as the story rolls along.  They likely begin the story as just another person, motivated by something relatable.  An example is the Val Kilmer character in Iron Man 3 or Syndrome in The Incredibles.  When we meet each character, in flashback, they are not much different than you or I.  Then something happens that sets them on a path which culminates in their absolute villainy.

Instead of building up these differences for dramatic effect, Footloose erodes them.  There is still an uphill battle for Ren to climb so he can prove himself, but the story is about finding common ground.  It’s a film about communion, in some respects, rather than building up to a fight.

Now, that being said, there is a fight near the end of the film.  This is between Ren, Chris Penn and the evil ex-boyfriend and his cronies.  It’s not really integral to the story, but maybe the storytellers figured there had to be some kind of villain once Shaw migrates back to the light and proves himself to be quite likable.  The fight happens quickly, and it produces perhaps the single best moment of the entire film, when Ren jump kicks the evil ex-boyfriend in the face.

So putting that silly but weirdly entertaining fight aside, this is a story about breaking down barriers.  Ren appeals to Shaw by pointing out passages in the Bible which support dancing as an act of prayer.  It’s a way of celebrating life, of embracing everything it has to offer, which does mean the ups and downs.  Dancing is a way of demonstrating the unpredictability of life and respecting that journey.  Or something like that, the point is that those who ban dancing are trying desperately to control something that can’t be controlled.  They restrain by trying to protect, and that’s just a losing battle.

The message of Footloose is to lighten up.  Released in the mid 80’s, I wonder if this has any broader connection to the Ronald Reagen-led crackdown on drugs in America.  Not that Footloose is telling its audience to run out there and snort up every lane line on the road, but it does seem to comment on the crackdown on such behavior.  The film isn’t about what’s being banned as much as the attempt to ban it.  It’s a story about the impotence of control.