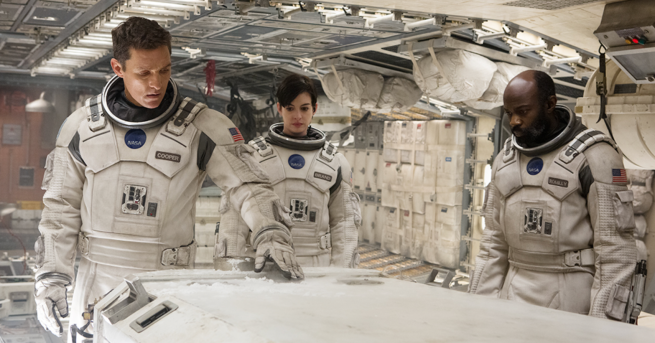 Rewatching Interstellar I forgot how strange and clunky the world and exposition of act 1 was.  Earth in this not so distant future is unsuitable for life.  There are dust storms milling about, schools deny the moon landing, and the New York Yankees play in front of crowds less than a thousand.  It’s both striking and amusing, and that’s a fine line the film has a hard time walking.  Some of these idiosyncrasies are played for jokes (the Yankees) and others are more disturbing (denying the moon landing), but once Interstellar leaves Earth the story really kicks into gear.

All of that exposition, or most of it, is necessary to get us where we’re going.  I think we have to see life on Earth as unstable and disorienting as the characters do, at least the ones who willfully head out on a mission far from home to save the human race.

I was so put off by this new world that I wanted to get the hell away from there, and I’m not exactly sure why that is.  I think it’s something like the ‘uncanny valley.’  This version of Earth is enough like ours to feel like home but different in ways to make it a little distressing, like the world of a Black Mirror episode.  It might just be like walking into a family dinner, and while everyone looks the same, they speak in different rhythms and about different topics.  There’s something just not quite right.

Because the world is different enough from ours, there is a lot of exposition to get through.  We have to meet not only Cooper (Matthew McConaughey) but also his daughter Murph (played as an adult by Jessica Chastain), not to mention the other characters who populate their world, from son Tom (Timothee Chalamet, Casey Affleck) to John Lithgow to Michael Caine and NASA as a whole.

The beginning moves quickly because there is always more information to convey, and the swiftness of each storytelling beat means the emotional ones don’t feel quite so earnest.

That changes in space.  The beginning of act 2 narrows the story down to a crew involving Cooper, Brand (Anne Hathaway) and two others, played by Wes Bentley and David Gyasi.  They journey to a planet near Saturn in hopes of finding suitable conditions for human life.

This is where the film gets a little more fun, playing around with the elements that make the story memorable, namely time and relativity.  They have to venture down to a planet where for every hour that passes, seven years will go by on Earth.  This challenges Cooper’s idea that he can get through with the mission and get home quickly.  After a fatal mishap, Cooper and Brand return to the ship where Gyasi’s character is now twenty-three years older.

Thinking about time in this movie is what makes it fun, and a little haunting too.  It’s at about the halfway point in the story that Cooper must reckon with the amount of time he has lost, and it’s then when the story begins to split its time between him and adult Murph, back on Earth.

The second half of the movie impressively weaves together these storylines and other tertiary arcs like a symphony.  Though time moves much differently for them, the Hans Zimmer music unifies their respective stories so that it’s as though they are playing out at the same exact moment.

This all leads to an appropriately trippy climax that takes place inside the warped environment of a black hole.  Things happen that tie everything together, and there is room for an emotional catharsis somewhere in there as well.

So Interstellar leave you wanting more, at least it did for me, which is quite something considering how awkward and uneven the first twenty minutes are.  It’s a very grounded, human story (fathers and daughters) told on a very grand scale, and both sides of this story resonated with me.  The visuals are out of this world, the music is riveting, and the emotional component, at lease once we’re in space, work quite well.