Lars holds on tightly to a vivid imagination that makes some children seem gifted or creative but which they inevitably let go of overtime.  While he blends into society, at least within this small midwestern town, he clings to a delusion that allows him to instill a blow-up sex doll with a complete personality.

Bianca, as he calls her, might just be more vivid a character than any other in the unnamed town where Lars lives.  She is a half Brazilian, half Danish missionary who is confined to a wheelchair (to explain her inertia) due to an unknown illness.  She loves kids and will soon become a hospital volunteer in addition to regularly attending church and befriending just about everyone in town.

Her apparent, supposed extroversion is a complete contrast to Lars, himself a hermit who avoids almost all physical contact and only leaves his house in the most dire circumstances.

Lars (Ryan Gosling) lives in a converted garage on the same property as his brother, Gus (Paul Schneider) and Gus’ wife, Karin (Emily Mortimer).  The two of them are expecting a child, but this takes a backseat to their concern for Lars.  While Gus seems content that his brother is just going through a phase, something he’ll grow out of despite being a 27 year-old man, Karin hovers over him like she might with her soon-to-be-born child.

Their concern, for a moment, is alleviated when Lars explains that he has met a woman online and wishes to invite her over for dinner.  When that woman turns out to be the stoic Bianca, constructed in the likeness of Angelina Jolie (?), they are speechless.

It’s now clear to them that Lars requires help, and thus brings a doctor, Dagmar (Patricia Clarkson) into the mix.  Because Lars is a functioning adult and poses no apparent danger to those around them, she suggests they go along with his delusion, and with time he should hopefully grow out of it.  Lars’ particular delusion is a clear coping mechanism, something to cover up a deep, psychological wound.

Over time this wound is made more understandable.  Lars and Gus were the sons of an alcoholic father, and Gus’ response was to leave home as quick as possible.  This left Lars and their melancholic father alone, and Gus now worries his departure made Lars crazy.

We learn, too, that their mother died during Lars’ childbirth.  He incorporates this into Bianca’s backstory, explaining that her mother similarly died in childbirth, and he frets over the possibility that something could happen to Karin during her pregnancy.

Lars’ fears are brought to the forefront, and his progress through these fears can be charted through his relationship with Bianca.  There is never any bold confrontation with these anxieties or a frank conversation about what Bianca is really there for.  Instead Bianca just runs her course.

One morning Lars screams that Bianca won’t wake up, so they take her to the hospital where the doctors and nurses treat her like any other patient, offering her up a room and everything but free healthcare.  Two nurses look in with curiosity, but everyone else treats the situation as real.

Lars is the one to determine that she is dying, and then she quietly passes away.  Later there will be a funeral in which everyone in town attends, not as much playing along as paying respects to someone they all helped create.

Lars and the Real Girl is a strange, beautiful little movie.  It touches on mental illness and real-world issues, but it deals with them in a delicate way.  Lars is an enigma, a strange combination of characteristics that makes us think we have a handle on him until he deviates from the expected path.  He’s a shut in, a delusional hermit, but he is able to carry on certain personal interactions and to hold down a job.  His behavior with one person says little about his behavior with another.

The town’s response to Bianca, to embrace her, is a surprising one too.  This aspect of the story reminds me of Teen Wolf (1985).  In that 80’s classic, Michael J. Fox turns into a werewolf, and while he initially hides from those around him, anticipating the same response as we expect, he soon finds that they adore him.  The school treats the wolf as its new mascot, and thus they react in a way completely counter to our own expectations.  The story then has less to do with him being a wolf but with how people build him up and what this does to his ego.

The heart of Lars and the Real Girl has to deal with how far an entire town’s population will go to protect someone they love.  This is discussed most directly in a scene between Lars and Karin… 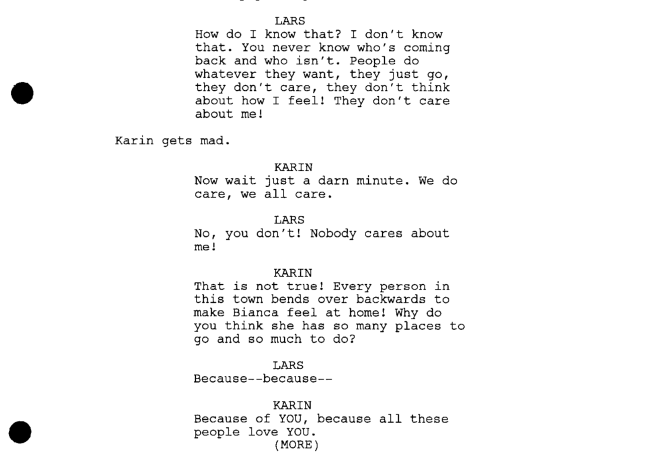 Lars is surely ill, but the film isn’t here to discuss the depths of his mental illness.  When someone requires help there is often another there tasked with providing that help.  It’s not always easy or romantic, but it’s often necessary.  When Lars needs help, others step in to make things easier.

In the beginning they resist or try to figure out alternative solutions that don’t require their participation, but by the end everyone is willing to do their part, to give a little when nothing is guaranteed in return.