Keanu Reeves has played a part in so many iconic movies over the last thirty years.  Here he is as the affable Ted, two years before playing the stoic Johnny Utah in Point Break.  Then you have Gus Van Sant’s My Own Private Idaho, Speed, The Matrix, even The Replacements, and most recently the two John Wick movies.

Reeves can play the suave, cool-headed enigma, the spiritual guru (the dentist in Thumbsucker) and the inspired but dimwitted Ted, similar to his character in Parenthood.  He’s so many things at once, and I can’t tell which character type he’s most known for.  When I picture Reeves, I picture all of the following… 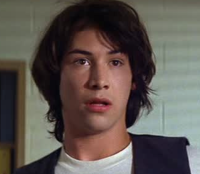 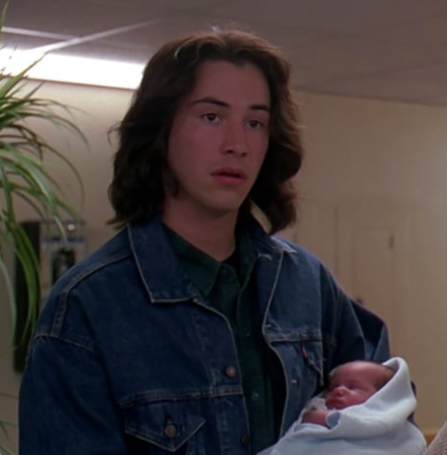 If there’s one similarity, maybe it’s that all his characters are aloof, whether in a goofy way or because there’s something about the world that keeps him at a distance (he’s the “chosen one” or he’s seeking revenge following the death of his wife and the murder of his puppy).

You get the sense that Ted is on the outskirts of everything because he’s so immersed in his own world.  We meet him and his pal Bill (Alex Winters), jamming in their garage as they plan how to make Wyld Stallions the most successful band of all time.  Well, maybe it’s not a band quite yet because they can’t really play their guitars.  It’s mostly an idea, one they’re not consumed by but certainly lost in.

Soon their attention will be diverted to another enterprise when it becomes clear that they have to pass their final history project or else Ted will be sent to military school.

The two of them are just as chosen as Neo in The Matrix, and this is how they find themselves offered a phone booth that travels through time, given by Rufus (George Carlin).  They will stumble through history, making friends out of Socrates (they pronounce it ‘SO-crates’), Billy the Kid, Sigmund Freud, Beethoven and more.

For the most part Bill & Ted just stumble through history, narrowly escaping sudden danger and never really getting fazed by any of it.  They will pass their final, but that’s not much of a concern because the stakes in this movie are pretty insignificant.  This is a story that surely would play better as a television episode, where the joke has less of a risk of wearing out its welcome, but the movie kind of does work, doesn’t it?

It’s hard to say.  Enough people think it does, seeing as how it’s become a cult classic, but such movies often begin on shaky ground and find their legacy over time.  Bill & Ted should wear out their welcome, but they’re fun to hang around with, their surprised, delighted, dumbfounded expressions never quite get old, and the movie as a whole apparently has staying power.

Had I seen this movie when it was first released, I’m sure I’d have the same reaction as when I first saw Napoleon Dynamite and the Lonely Island’s Hot Rod.  I thought them to be low brow, unfunny, nonsensical garbage, and then for some reason I watched them a second time and loved it all.

Who knows why certain movies work.  I think it has to do with a handful of quotable lines, like bite size pieces of candy, which people can then repeat all around town with little need for context.  The way Bill & Ted play their air guitars, joke about “Sixty-nine DUDE!” and say things like “righteous,” are all easy to repeat, reuse and reclaim.  They are phrases that anyone could adopt, and I wouldn’t be surprised if many of their mannerisms became incorporated into pop culture only after the film was released.

The more people repeat and reenact these things, the more the film lives on.  The third time you watch it will be much funnier than the first because it reminds you, I suppose, of the community around you.  It’s a film that brings people closer because it’s meant to be shared.