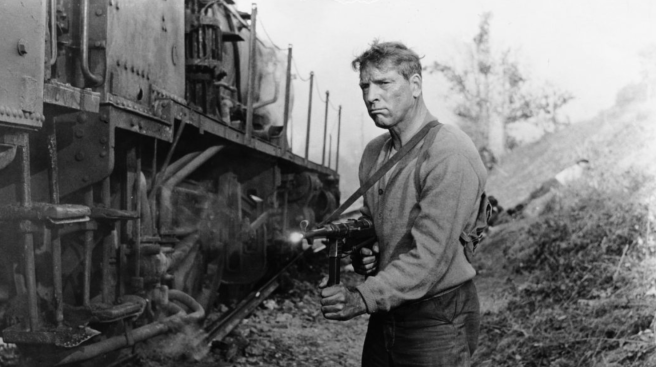 There’s a lot of deep focus in The Train and, from what I recall, other John Frankenheimer films like The Manchurian Candidate and Seven Days in May.  Let’s start there… 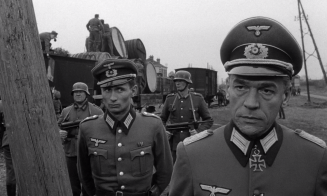 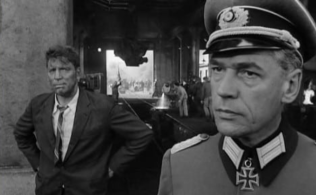 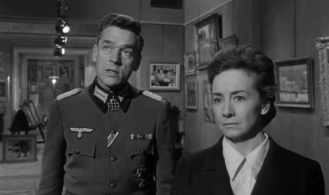 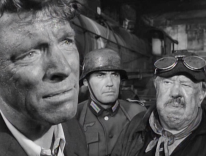 These are all political films, much more about conflicts between ideologies than between individuals.  We see them in deep focus, carefully staged, so that the focus is often the dynamic between them.  Their maneuvering, whether physical or symbolic, is an expression of the head games going on between them.  As a battle of control, progress in stories like these can sometimes be invisible.  It’s not about getting the girl, killing the bad guy or winning the big game, and there’s sure as hell no sunset to go riding off into.  Success is less concrete and maybe, in the eyes of some of his characters, impossible.   These characters are fighting against what the other represents, and in that battle we are meant to determine the value of what they fought for.

So I think that’s where the deep focus comes in, to show us the forces working against our hero.  Someone like Paul Labiche (Burt Lancaster), the protagonist in The Train, we almost always see visually in relation to the antagonists surrounding him.  He doesn’t exist in a vacuum because he couldn’t exist in a vacuum.  Frankenheimer’s heroes are defined by what they’re in opposition to.  His characters reflect the policies of a certain demographic, party or country, but we usually see them only in conflict with other such demographics, parties and countries.  From the films I’ve seen we don’t see the fruits of their labor, just the labor.

In The Train, Labiche is the reluctant but honorable American hero (ignoring the fact that the character is really a French resistance fighter), and Colonel Franz Von Waldheim (Paul Scofield) is the Nazi (need I say more?).  There’s a clear good versus evil quality to the story, and Labiche and Von Waldheim, though defined as individuals through their own actions, represent something much more broad.

I label Labiche American because he’s played by Lancaster, and Frankenheimer’s other films deal mostly with American politics (at least the two I’ve seen, I suppose).  Seven Days in May is about the Cuban Missile Crisis, and The Manchurian Candidate is about communist paranoia.  The Train makes Labiche at first an unwilling participant in the story.  His goal reflects the policy of neutrality of the United States before the attack on Pearl Harbor.  Only after the Japanese forces attacked did the U.S. get involved in the multiple battle fronts of World War II.

There are only a handful of days remaining before Allied forces kick the Germans out of France.  It’s the waning days of the war, and the Germans know they are losing.  Most French citizens, therefore, want to keep their head down and just ride out these final few days before freedom.  Labiche is the most visible of this group.

Colonel Von Waldheim, beyond being a Nazi, can appreciate fine art.  When the story begins he wants to take all of the famous French works (by people like Manet, Matisse, Cezanne, Van Gogh, etc.) with him to Germany.  We never see the paintings in detail, instead just a series of boxes stamped with the artists’ name.  He will load these on a train car which others will work to stop without damaging the precious cargo inside.

Labiche doesn’t understand why people would risk their lives to stop the train.  It’s just art, and while it’s important, is it really more important than human lives?  That’s the question the film poses but never offers any easy answer to.  Jumping ahead, the way the film ends is striking and somewhat uncomfortable.  It reminds you of this dilemma and challenges the viewer no matter which side of the debate you would fall on.

Labiche, for the first 40-ish minutes of the film, is against this mission.  It’s not until a friend of his risks and loses his life to stop the Germans that Labiche will begin working with the resistance.

As the story goes on, resistance fighters are slowly picked off until the cat and mouse game boils down to only Labiche and Von Waldheim.  What was once a group effort is now the tireless will of one, and this is when Labiche’s heroic attempts to thwart the Nazis feel like Indiana Jones doing much the same.  He is a symbol, far beyond himself.

The Train is a wonderful movie not just because of its commitment to a single, even devastating message but for how streamlined and simply entertaining it is.  It’s not just characters debating philosophy in a room but also a series of riveting set pieces that involved the actual destruction of a train station and multiple trains.  There are a lot of practical effects, and the action here is as visceral, if not more so, than many modern day movies.

There is a purpose to the action, and that purpose makes it all the more gripping.  It’s also important that we see the great lengths Labiche and company go to in their mission. We understand the enormous odds stacked against them, and we see the destruction in loud, clear images.

As the film ends, the quickness of the editing during the most destructive sequences is replaced by a quiet but no less inspired attempt to sabotage the Germans.  Labiche hurries ahead of the train and works to loosen the tracks a few hundred yards ahead.  Much of this is filmed from a single angle and done in a single shot.  Burt Lancaster is really right there, hammering away the rail supports and unscrewing the heavy bolts fastening it to the ground.  We understand logically the immense effort he is putting in, and we certainly feel the weight of it emotionally.

Labiche’s efforts work.  He wins, but he doesn’t exactly save the day, if only because we are reminded of the toll that went into this victory, just as with all “victories.”  Before Labiche guns down Von Waldheim, the Nazi delivers this monologue…

“Here’s your prize, Labiche. Some of the greatest paintings in the world. Does it please you, Labiche? Give you a sense of excitement in just being near them? A painting means as much to you as a string of pearls to an ape. You won by sheer luck: you stopped me without knowing what you were doing, or why. You are nothing, Labiche — a lump of flesh. The paintings are mine; they always will be; beauty belongs to the man who can appreciate it! They will always belong to me or to a man like me. Now, this minute, you couldn’t tell me why you did what you did.”

Those would be Von Waldheim’s last words, and the film ends with Labiche walking away from the carnage, silent.  What’s left behind is what the film focuses on in static close ups: the stamped boxes of unseen art and the dead bodies of a series of hostages, the most recent of those who died as part of this mission.

So The Train celebrates the unselfish efforts of French resistance fighters to save precious, timeless works of art.  These are people who could have kept their heads down for a few more days and lived on past the war.  Instead they represented something more important than their own lives.  Even so, the film poses the same question to us, the one these characters came up with an answer to.  On one hand maybe we should feel the same, and probably we do, but Frankenheimer chooses to show the most recent dead, those who didn’t volunteer to die, and he has Labiche march silently away, possibly shaken at the realization of what all has happened.