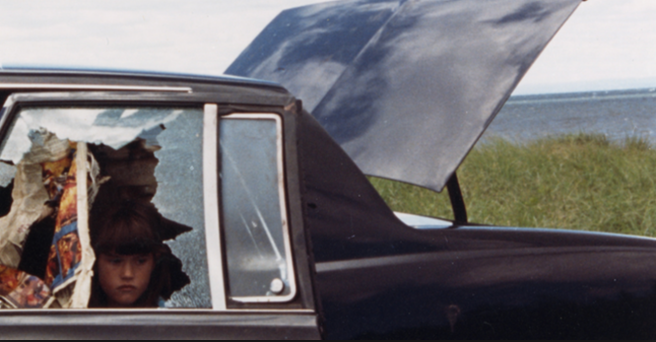 Oh boy, this was tough to watch.  Clean, Shaven puts you firmly inside the mind of a schizophrenic, someone who thinks he has micro chips embedded in his head and who decides to do something about it.

Peter Winter (Peter Greene) is said schizophrenic.  It’s only a minute or two after we meet him that he clubs a girl to death, and later he will murder another child, I think, or was it the same child?  I have a hard time remembering the specific details, and the way you take in this film will be just as scattered as Peter’s own accounts of the story.  Who knows what he thinks is real or imagined, it all blurs together.

Peter can’t bear to look at his own reflection, or even other people for that matter.  He spends most of the film driving around in a beat up old car with tape over the mirrors and newspaper across the windows.  When he once glimpses his reflection in the car window, he bashes it in with his fist.

He’s searching for his daughter, forcibly given up for adoption, but he’s also just on the run, whether that’s from the cops, the government or just himself.  Peter hears everything and more.  The power lines buzz loudly in his ear (and on the soundtrack), and he hears police sirens when no one is following him.

He’s on the edge, constantly, and the most viscerally disturbing parts of the film show in detail how he scrapes away at his skin, takes a pair of scissors to his scalp and removes a fingernail [shudders].

Peter is disturbed, and all that really matters is that we feel what he feels, and we f*ckin’ do.  I couldn’t imagine this film being any longer than it is because there’s only so much looking away from the screen I can do.  The film is unsettling and effective, and in the end it all feels like some kind of fever dream, one that I’m glad to have awoken from.

Kerrigan and company do a great job making us feel on edge.  It’s not just Peter but so too the detective coming after him.  Though not schizophrenic like the man he’s after, this man is either a little on edge himself or he takes very seriously the idea that you have to think like a killer to catch a killer.

That detective, Jack McNally (Robert Albert), is emotionally distant, hyper-focused and apparently more than a little unsettled.  He will make a (successful) pass at a woman within the story, but we gloss over what could be a romance and return to what the film is interested in, Peter’s and McNally’s vacant stares and discomfort with the world.

I tie McNally into all this because his obsession with the body of a dead girl, who turns out not to have been murdered by Peter from what I recall, parallels Peter’s own obsession with finding his daughter.  He will, but their reunion is cut short when Peter and McNally cross paths.

McNally believes Peter to be the girl’s killer, and so do we because we saw Peter load a girl-shaped bag into his trunk earlier in the film.  When they run into each other both draw guns, and McNally shoots Peter dead.  He then finds that the bag in his trunk has only newspaper in it, and he fires Peter’s gun in the air to help the story he will put in the report, that Peter fired at him first.

So both men have to deal with things not adding up.  Did Peter even kill the girl at the beginning of the film?  Perhaps it really was all in his head like the other of his delusions we are privy to.  Peter is on a path, dealing with things that aren’t there, and at the end of the story McNally is the one who must reckon with his own convictions conflicting with reality.