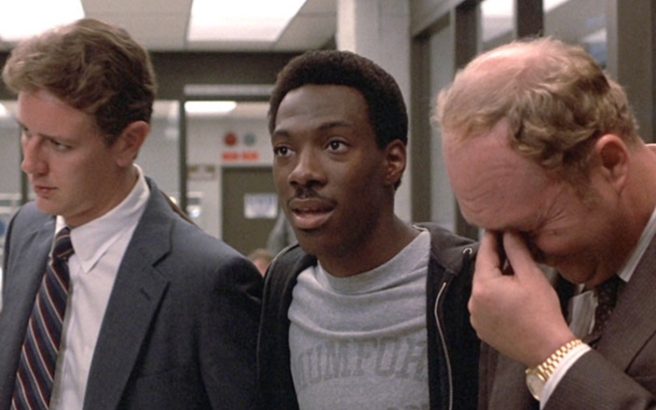 Detroit cop, Axel Foley (Eddie Murphy), is a fish out of water in Beverly Hills when he goes to investigate the murder of his friend, Mikey (James Russo).  As a black man he will find himself challenged not only by the man he’s chasing after but the police as well.  Eventually things will work out, as they do in movies like this, when Axel shows the LA cops when to bend, even shatter, the rules.

What I love about this kind of movie is the large set piece in the first sequence.  Typically you find the hero deep in the climax of a mostly unseen storyline.  There is a long fight or chase scene which ends with the protagonist further from some kind of goal, setting up the challenges or limitations they will have to face for the rest of the movie.

You see it in Captain America: Civil War, for example, when “…approximately one year after Ultron‘s defeat in the nation of Sokovia at the hands of the Avengers,[N 1] Steve Rogers, Natasha Romanoff, Sam Wilson, and Wanda Maximoff stop Brock Rumlow from stealing a biological weapon from a lab in Lagos. Rumlow blows himself up, attempting to kill Rogers. Maximoff telekinetically contains the explosion and throws it upward, damaging a nearby building and killing several Wakandan humanitarian workers.”

So that sounds like a lot, and it’s the first 10-15 minutes of the movie.  It only works to justify the restrictions the protagonist will face for the rest of the movie.  In Civil War, as far as I remember, it means there will be a crackdown on the Avengers’ autonomy considering the destruction they’ve contributed to.

It’s much the same in Beverly Hills Cop.  Axel is in the middle of an undercover investigation which, you guessed it, goes wrong.  It’s a chase scene that drags on a little too long and ends with his boss making it clear he’s on thin ice.  All this does is establish that Axel has to stay in line if he wants to keep his job.  No problem, right?  Well then Mikey comes to visit, is promptly killed, and when Axel tracks his presumed killer to Los Angeles, he’ll have to fight to justify why he’s there, conducting off the books police activity.

Mikey is a pretty forgetful character despite the fact that his death sets the story in motion.  The true emotional center of the movie involves the budding respect between Axel and two Beverly Hills detectives, Billy Rosewood (Judge Reinhold) and Sergeant Taggart (John Ashton).  Well, I should say the budding respect they have for him, because Axel always does things the right way, even if he breaks the rules.

Investigating his friend’s murder, Axel will find himself mistreated (i.e. thrown through a glass window) by the men he rightfully accuses of said murder.  Then the cops arrest him, learn he’s a detective and let him go but assign the aforementioned detectives to guard him and make sure he doesn’t accost anyone.

So Axel is actively going out of his way to jeopardize his career, but we know he’s correct (we see who murders his friend), and the movie never lets us question his motivations or his actions, if only because every hunch he has serves him well.

At first Axel will lose the tail and go about his investigation.  When he is again arrested, the cops try to sit him down and set the story straight.  This is when the detectives, and their boss, Lieutenant Bogomil (Ronny Cox) decide that Axel might be onto something, regardless of his lack of evidence.

Because the movie needs a second antagonist, it’s Bogomil’s boss who then cracks down on their autonomy, telling them to stay away from Victor Maitland (Steven Berkoff), the man who had Mikey killed, using as his muscle a man named Zack (Breaking Bad‘s Jonathan Banks).

The story is a little silly, partially because it doesn’t take much for Axel to convince the detectives he’s right or at least that the case is worth pursuing.  It makes you wonder why he didn’t just sit them down much earlier in the film and explain his thought process.  Maybe he assumed they wouldn’t believe him, and maybe there’s a deeper message here that Axel knew, as a black man in a very white area, that his story would be quickly dismissed.  Still, when he finally does explain to them what he’s doing, they respond reasonably.

Still, the chief of police, or whoever it is, orders Bogomil to order his detectives to escort Axel out of town.  Then Axel convinces Rosewood to help him look for evidence that Maitland is taking part in drug trafficking (as a means of getting him arrested), and Rosewood listens.

This detective work will get Axel’s accompanying friend, Jenny (Lisa Eilbacher), kidnapped by the bad guys, and that leads Axel and Rosewood to Maitland’s fancy mansion/lair.  Taggart follows, and soon everyone descends on the scene for the final shootout, search warrants be damned.

Things then work out well for the hero and his team.  Not only does he punish the men criminals and his friend’s killer, but he earns the respect of the Beverly Hills police force.

One thing I want to note about this final sequence is the way it balances several storylines.  Axel goes in, guns blazing, and because he’s the hero, he’s the one who gets to do the heavy lifting.  Still, Rosewood and Taggart are there too, but for most of the sequence they just take cover from the henchmen’s machine-gun fire until backup shows up.  That’s it.

So how do you give them an arc, even within just this sequence?  If you lay out the storytelling beats, it’s…

Taggart/Rosewood head into the compound… they take cover from gunfire… backup arrives, and they day is saved.

That’s pretty uneventful, but what writers Daniel Petrie Jr. and Danilo Bach do is let the two men share a moment which then pays off a few minutes later, adding an appropriate resolution to the sequence which works as some character development even if it adds nothing to the plot.  Thus this makes the sequence feel more resolved than if they had just sat there until they were saved.

While they first take cover, Rosewood stands up and tells the men shooting at them that they are under arrest.  Then there’s more gunfire, he ducks, and Taggart makes a joke about how ineffective his badge is.  Later the cavalry arrives, making the henchmen drop their weapons.  Once it’s clearly safe to do so, Rosewood again stands up and tells the men they’re under arrest.  He winks at Taggart, amused by himself, and Taggart does something similar in return, thus there is a feeling of resolution even though the characters did little to effect the outcome.

It’s a small detail, and I’ve perhaps wasted too much time describing it, but I find it interesting.  It’s a good way to make it feel like something happened when nothing really did.  It’s not necessary for that moment to occur, just as it wasn’t necessary for Rosewood to remark that their predicament is reminiscent of a scene in Butch Cassidy and the Sundance Kid, but still it adds something to the story.

I think it shines a light on the ways in which stories work as long as it feels like the characters are developing and changing.  Plot can often only go so far, but if we feel as though we’ve witnessed some kind of arc, even one told within two lines, it makes the experience feel that much more rewarding.

One final note is that the comedy in a movie like this is similar to the movie Fletch.  In both cases the bankable movie star, Murphy and Chevy Chase, is the source of most of the comedy.  They are wisecrackers who are nonetheless the most capable character in the room at any moment.  They are comedians placed within a story that would otherwise be an action or drama movie.  It’s the comedian’s involvement that makes the movie a comedy.  They comment on things they find absurd, they throw out funny one-liners, and they have a way of never taking seriously the things that everyone else does take seriously.