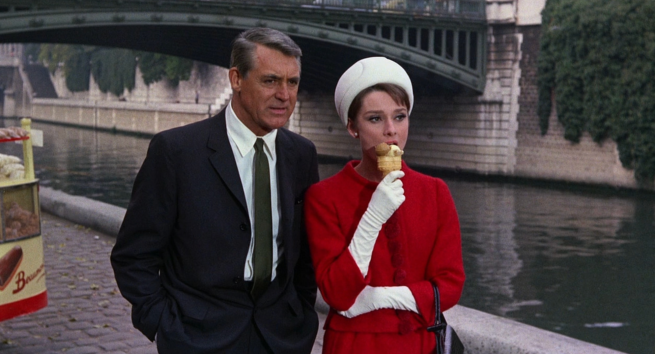 Charade was released to a shell-shocked audience a month after the assassination of John F. Kennedy.  To some it might’ve felt suddenly outdated, the bankable Hollywood stars and happy ending proving to be out of touch with an increasingly grim reality, and to others it might’ve been a soothing sense of normalcy when nothing else made sense.

It would be the end of an unofficial era, one of the final films of Cary Grant’s career (following 30-ish years in the industry), though you wouldn’t know it watching the movie itself.  Grant plays the type of character he’d been playing for decades, whether in screwball comedies like Bringing Up Baby (1938) or a Hitchcock movie like Suspicion (1941).

He’s the handsome protagonist though his character is only as old as he is in order to fit him into the movie.  From what I’ve read Grant was self-conscious about the 25 year age gap between him and Audrey Hepburn, playing the film’s main character and his love interest.

Grant plays Peter Joshua in Charade, but that name means very little to him or the people who use it.  He will go by a handful of other names, leading Regina Lampert (Hepburn) to become exasperated in one scene, trying to figure out who exactly he is and what he wants all while she falls in love with him.

No one is who they say they are in this story, and there’s a storm of mysterious, sinister thieves bearing down on Regina, the widow of a recently deceased man whom the thieves believe has left behind $250,000.

They drop by the man’s funeral to make sure he’s dead and attempt to intimidate Regina. She turns to a CIA officer, Hamilton Bartholomew (Walter Matthau), who tries to lead her through the fog and assuage her fears that the thieves, in believing she has the money, will kill her.

While this is all going on she will meet Peter, a smooth-talking, backstory-hiding comfort in the face of all this other intimidation.  It’s not long before we learn he is in cahoots with the other criminals and not long after that when Regina learns this as well.

There are enough plot twists that could each be held back until the end of the second act but which unfold seemingly constantly and without much breathing room.  It’s hard to keep track of who’s who, but all that matters is that Regina’s suspicion will narrow in on Peter, as will ours.  His character is very similar to the one in Hitchcock’s Suspicion, and both films push him into a corner in which we think he must surely be the villain before a last minute plot point assures us he’s the good guy.  It’s perhaps one twist and turn too many to make sure this has a nice, happy ending.

Still, Charade is a fun movie, entertaining and dramatic, unafraid to get a little dirty but also delighting in some of Grant’s early slapstick charms, having his banter with Audrey Hepburn unfold like it does in some of his best work with Katharine Hepburn.