The world of Last Year at Marienbad is constructed before our eyes.  Like with Charlie Kauffman’s Synecdoche, New York (2008) we watch the environment unravel and expand as the movie unfolds.  It’s near impossible to tell what is “real” or fabricated because for us to know that we would have to understand the truth that the two main characters can’t agree on.  Those characters, an unnamed man and woman, may have met at the same location the previous year, or they may be complete strangers.  The man (Giorgio Albertazzi) insists that they had an affair, and the woman (Delphine Seyrig) listens but repeatedly tells him he’s wrong.

This dynamic and divide is the only real conflict throughout the film.  The man tries to remind the woman what happened, she listens, and then she tells him he’s wrong.  The only thing that changes is how we view their relationship.  Going in you might assume he is correct and that she is purposefully misleading him, for reasons we have yet to discover.  His efforts to appeal to her will take on new strategies but with a similar lack of results.

As this is all going on the movie’s cinematography, voice over and dour organ music build and build to perpetuate a depressive, overbearing atmosphere.  As an accompaniment to the man’s stubbornness, it begins to feel like he is stealing something from her.  It’s not so much that they may have known each other but that he needs her to conform to his own beliefs.

At this point the man’s control over the narrative (and her own) becomes an oppressive force in itself.  He is the one leading the interrogation, his voice over stitching together the otherwise disjointed sequences, and it’s the man who essentially just forces himself on the woman.  By the end this will become more disturbing and uncomfortable, alienating the man from the audience.

We never know what did or didn’t happen, and the movie’s images reflect that.  There is a dreamlike quality, not just from the fluid structure (where people, locations, etc. change on a dime) but to the way characters speak and the images that frame them.  The whole thing feels like a bunch of Salvador Dali paintings (like in the image below where the people have shadows but the trees do not)… 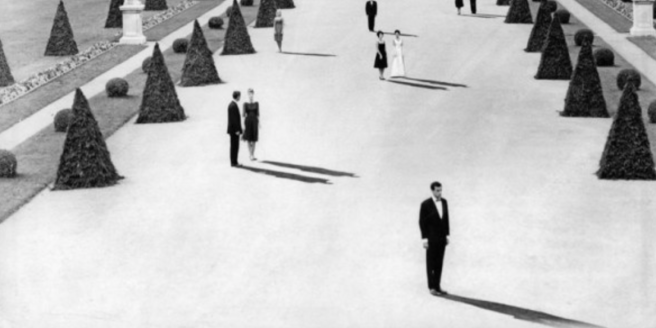 …and the characters speak with the weight of life and death consequences.  We may not understand why, but for the characters in this story every uttered sentence could make or break them.

Because of this the movie becomes increasingly dark.  The sense of doom is there from the beginning, but we know so little about the characters or this world that it’s hard to feel that exact doom.  The more we see how relentless the man is, the more it feels like he’s taking something from the woman.  He’s attempting to shape her memory of past events and take away her agency.

The dynamic becomes so sinister, in fact, that it’s hard not to picture the man as some kind of grim reaper but one who can only take away the dearly departed after he successfully convinces them they’re dead.

When the film opens, we hear the repeated monologue of a stage actor, as if he’s a record that keeps skipping.  He speaks of the past and the ways the present will soon be the past, and all the while we look at beautifully framed images of old architecture constructed possibly multiple centuries before.  This all creates the idea that we are inside a tomb, and considering now that this film is nearly 60 years old, the effect has only gotten stronger.

Soon we see an enraptured audience, stoic and unblinking.  When we finally see the actors on stage, it is as if they’ve waited for us (the camera) to catch up, and they finally resume the play.

As the story unfolds the characters populating each scene will continue to freeze, standing as still as statues.  This is a recurring effect, calling attention to just how fabricated this whole reality is, both in the sense of film itself and of the man’s eventual constructed reality.  It’s all flimsy and should be called into question.

This sense of construction, allowing us to see the seams of reality, is further enabled by having background performers who don’t move and often don’t even speak.  They are nothing more than mannequins, only half-rendered and half-fleshed out.  They exist as cameos, like the people we’ve never met but who are there in memories we may have in a crowded space.

It’s an alienating, uncomfortable effect, and it further isolates the man and the woman since they are two of the only characters who speak throughout the film.  As far as we are concerned they are the only two people alive, and it’s up to you to decide what their relationship is.  Maybe this is some kind of psychoanalysis like in an Ingmar Bergman film, or maybe it’s something as surreal as the grim reaper.  Maybe it’s the subconscious of one or both characters.

The only other character who I can remember speaking anything of substance throughout the film is another unnamed man, implied to be the woman’s husband (though there is little intimacy between them).  He’s a tall, slender, mysterious man who continually plays a game of logic with others, including the man whose narration dominates the film.

In this game he lays out four rows of sticks, each with a different odd number, starting at one and building up to seven.  To play, each participant takes turns grabbing one or more of the sticks, but in one hand they can only grab sticks from a single row.  That means you can grab only one or up to seven, depending on the row.

This second man insists he will always win, and he does.  We see other characters challenge him and grow exasperated when they fail to win.  They think they’ve found the way to win only for the other man to continue defeating them.  It’s a game of logic in which they fail to identify that logic.

I suppose this contributes to the other storyline thematically.  For the main character, the man, he struggles to see why things don’t add up, and he grows more petulant as they fail to go his way.  Within this innocent stick game there is a single force (the game) and two people who are able to look at the same evidence with drastically different perspectives.  They can both co-exist so long as the game isn’t over, but once it is, it means the loser has, in a sense, died.

The main storyline of Last Year at Marienbad could be seen as some kind of game.  The man believes he is losing, and he grows more and more exasperated as time runs out.  There is an unmistakable sense of mortality attached to this “game,” which adds to the disturbing nature of it all.  Unless I’m severely misreading this, I take it as a sign of the importance of the man’s ego.  It matters more to him to reaffirm his own beliefs than it does to identify the truth.  He is unrelenting even at the risk of killing or erasing the woman who he has decided to wrap up in this story.  The man’s agenda means more than the truth, in other words.