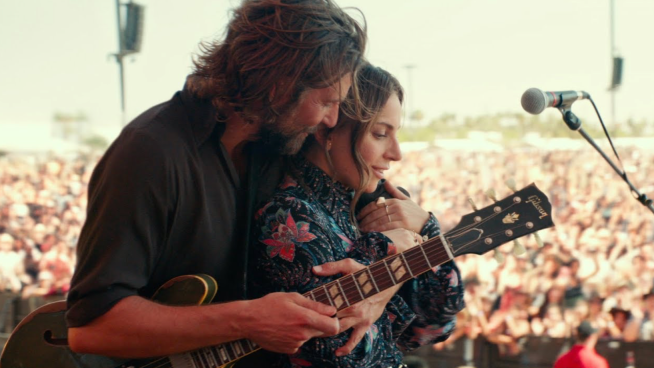 A Star is Born is a melodrama in which celebrity, it seems, is a zero sum game.  The movie tracks the romance between a fading star musician, Jackson Maine (Bradley Cooper) and an up and coming pop star, Ally (Lady Gaga).  They meet by chance, in the ways Hollywood lovers do, and their subsequent romance and career twists and turns will have more to do with contrived conflict than internal ones, reaffirming the fairytale sensibilities of old Hollywood movies.

There are clear similarities between this movie and 2016’s La La Land, and if you like one you’re likely to enjoy the other.  That being said, I think La La Land remained tonally consistent while A Star is Born bounces all over the place.  It leans into the sad, plays up the romantic and takes its characters very seriously.

The first half of the movie is much better than the second.  Though always feeling like a grand Hollywood imagination of what life is like, there is a charm to the Cooper and Gaga characters.  They have a certain amount of chemistry and energy, and the music is catchy enough to keep it all entertaining.  There is also the wish fulfillment of a ‘star being born,’ seen most clearly in a pretty awesome scene in which Maine first drags Ally onstage to perform a song she sung for him.

The second half of the movie jumps very quickly through time, following a pretty familiar rise to fame type of story, one we’ve seen too many times to treat with any seriousness here.  Ally’s arc, in which she produces a hit single, then an album, then goes on Saturday Night Live, then wins a grammy, is so lightning fast that it almost feels like satire.  Well that and her music isn’t all that good, at least for someone of Lady Gaga’s talent.

The main idea of the movie, at least from what I gather, is that celebrity can be dangerous.  It’s his fame that keeps Maine’s guard up, and it’s a slow loss of fame followed by a dramatic decision made to protect Ally’s fame that brings about a somber end to his storyline.

Even as I type that, however, I think of moments that don’t seem to indict such celebrity and even hold it up as something worth pursuing.  I guess what I’m saying is that I have no idea what I was supposed to take away from this movie other than that Jackson Maine and Ally were star-crossed lovers, a message which always seems a little conceited.

In La La Land the message was that to achieve certain dreams you have to let others die.  The Ryan Gosling and Emma stone couple didn’t last only because their commitment to their careers got in the way.  Sure, you could say that their respective successes were hard to believe, but there is a definite, acknowledged suspension of belief in that movie in an attempt to make a singular point about ambition and difficult choices.

In A Star is Born there is no singular message, no broader point about fame, the music industry or what it means to fall in love.  It’s just a story about two people and that’s it.

The movie touches on all those things, having a voice, having something to say, pop music, celebrity, the ways people want something from you, addiction and sober living, etc. but it never takes a stance on anything.

One example is in Ally’s career.  She starts by singing stripped down songs either by herself or with a piano and little else.  Her music is catchy enough, and it’s meant to be striking.  As she gets more famous, however, a slimy manager tries to change her image, giving her a new look, backup dancers and making her music sound more in line with modern pop expectations, the type of stuff you hear on the radio or remixed in a nightclub.

The message seems clearly to be that the industry is changing her.  She had a voice, and it’s being used to commodify her.  However, Jackson will later bring this up during a particularly ugly (both within the story and its execution) fight only for Ally to stand her ground and defend these choices as an artist.  But we don’t see them as choices, just as the things pushed upon her by a manager whose only goal is to make money.

So are we meant to respect Ally’s ‘choices?’  Her music doesn’t seem all that good, so I’m just not sure what the takeaway is here.  The flashiness of Ally’s onstage persona doesn’t feel in line with her character even if it does feel in line with Lady Gaga’s persona.  This is one of a few examples of the blurred lines between the movie’s reality and our reality.

People want to take something from him, whether just a sly photograph, an autograph, etc.  They don’t treat him as a person, and Ally observes and criticizes this.  We can also reasonably assume that Jackson’s fame and addiction to that fame (as he loses it) contributes to his alcohol and drug addiction.  The point is clearly made that fame has a dark side.

AND YET as Ally achieves a similar level of fame there is nothing bad about it.  She’s growing more successful, and Jackson will make a kind of absurd, very melodramatic, decision to protect that fame.

There is a lot to like about this movie, particularly if you embrace such melodrama and crazy twists and turns.  The second half still moves so quickly that it erases any real nuance to the characters, particularly Ally’s, but the arc is familiar and harkens back to an older age of Hollywood movies.  These movies celebrated the love story and held it up as something to aspire to.  Through all of Jackson’s ugliness, his love and affection for Ally is meant to feel true and pure.  Whether it does is another discussion, but that’s the clear intention.

The last thing still on my mind about this movie is just how cliche it can be, which again might be a part of that melodrama.  The movie opens with Jackson getting onstage in front of a large crowd, but before he picks up the guitar he shakes a few pills into his hand and downs it with something on the rocks.  We get it, he’s an alcoholic.

This source of conflict, along with a bunch of others, feels stripped from other movies, and A Star is Born as a whole is a bunch of movie star choices, made by a movie star for a movie star to look like a movie star.  It’s a movie inspired by other movies (also a remake) that exists in another realm, where conflict is black and white, the heroes are always the heroes, and characters are never meant to be questioned, only accepted as the authority.