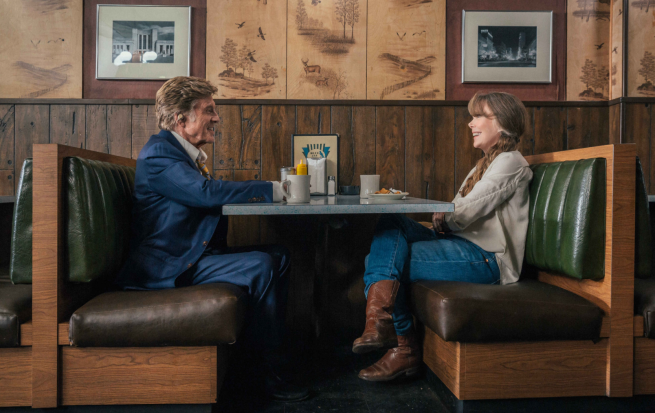 The Old Man & the Gun is a cross between a Robert Redford homage and a David Lowery movie.  This means that we get a story about a charismatic, good ‘ol fashion livin’ handsome bank robber complete with a purposefully 1970’s aesthetic as well as a sweet, at times melancholic but ultimately wholesome story about what it means to live during a moment in your life where you have an abundance of choice and a lack conviction that you’ve been doing things the right way.

The immediate story would seem to necessitate a much different tone, something more edgy and rambunctious, and as much as I love what Lowery’s movies lean into I do think this movie calls for a different manner of expressing this text.

At the same time The Old Man & the Gun is a very pleasant experience.  It lacks the conventional thrills of most bank robbery movies and sets aside any kind of broad comedy you might expect from a group of criminals labelled the “Over the Hill Gang.”  In addition to Redford they are played by Danny Glover and Tom Waits, two performers who bring a lot of weight into their brief screen times based on their own fame.

These characters are never treated as one-note jokes but rather people keen on living their best, most adventurous lives.  They have their own aspirations, but we don’t spend enough time with them to really understand what they’re all about.

The other important character to this side of the story is Sissy Spacek, playing Jewel, a widow whom Forrest Tucker (Redford) develops affections for.  To say he falls in love with her is going a step far, but their courtship does have a pleasant resonance even if the more we learn about his character suggests a darker but underdeveloped side.

As with most bank robber stories there needs to be an equal to the thief, typically the man hunting him down.  Here it’s John Hunt (Casey Affleck), a melancholic recent 40-year old whose sudden aspirations when it comes to Tucker’s arrest act as a way of re-engaging with life following an early midlife crisis.

The common theme in all of this is learning how to live.  Forrest Tucker seems to have it figured out, and the two other leads of the movie, Spacek and Affleck, demonstrate a quiet frustration with finding the same peace in their life that Tucker evidently found long ago.

In this way the story certainly glorifies Tucker, but it’s not hard to see that the movie is actually glorifying Robert Redford.  There are flashes of some of his famous movie roles in this one, and the whole film feels like a send off for the actor who has claimed this will be his final role.

In interviews David Lowery has discussed focusing not on the real story of Forrest Tucker but on the modern day fable that his life has become.  This story, then, is the one Tucker very much wants you to hear, the one that celebrates his triumphs and and sees it through the eyes of the people charmed to have met him.

Lowery’s movies focus on how and why people tell stories.  From his 2011 short Pioneer, about a father telling his four year old adopted son the embellished story of his deceased mother, to last year’s A Ghost Story (a quiet, subdued fairytale of a ghost out of place), his films are concerned less with reality and more with the emotional truths of stories we tell and movies themselves.  In this way he calls attention to the act of storytelling, and as a result his movies might not work so well in the conventional sense, but they work on some kind of meta level.  His films take their time, never rushed, paralleling the way Casey Affleck (in three of his movies) talks.

So Lowery’s movies are patient and may even test your patience.  They call attention to time itself, how much has passed and how much we have left.  His characters may have unimaginably long futures ahead of them, or they may be looking back on the unimaginably long life behind them.  They are rarely in the moment, instead drawn to look ahead or behind, but their preoccupation with time, stories and their own story is what helps us focus on the present.  What Lowery’s movies seem to tell us is to focus on the ‘right now.’

When you watch a David Lowery film this seems to be clear from the get go.  His stories are wholesome and life-affirming, but they often deal with characters struggling to embrace the inevitability of their own mortality.  By the end they typically find some kind of peace, as if they’ve finally become one with the world, or at least the movie world his films create.

I’m talking around the story here because if you’ve seen a bank robber movie before, then you know what happens here.  Nothing is surprising, and the conventionality of the ‘rise and fall’ may make this a frustrating watch.

Taking the text literally, there were things I found uneven about the film, one which does a more underwhelming version of movies like Heat and Hell or High Water.  We learn enough about both Forrest Tucker and John Hunt to become invested in them, and while they do share a pretty exciting, albeit brief, confrontation near the end, their respective goals turn out not to conflict with each other as you’d expect.

Sure, Hunt wants to catch Tucker, but by the end he can tell that this exciting fascination with the man is a symptom of a different, deeper kind of longing.  Tucker too will have to acknowledge what his behavior really says about himself, and in the end both characters overlap with each other, searching for meaning in their actions and behavior, some of which they understand and others which are completely driven by something unconscious.