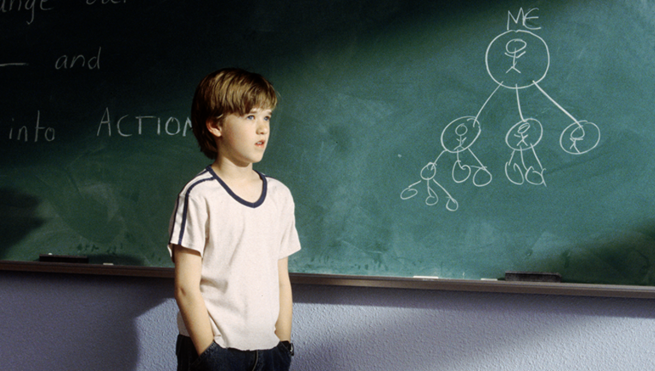 I think Pay it Forward wanted to win an Oscar, and because a movie like Crash won, I see why they might think this.  But still, Pay It Forward is somewhere between endearing and awful.  I’m not sure exactly where.

The movie makes great use of Haley Joel Osment, so that’s a good jumping off point.  He was a great child actor, and A.I. Artificial Intelligence probably made the best use of him crying while The Sixth Sense made the best use of him looking scared and vulnerable.  Pay It Forward has a little of both kinds of Osment, and it really leans on him as the film comes to a close.

Osment plays Trevor McKinney, an 11 year old boy who lives somewhere outside of Las Vegas with his single mother, Arlene (Helen Hunt), who has a severe drinking problem.  He also finds a father figure in his teacher, Eugene Simonet (Kevin Spacey, I know…) and will spend much of the film trying to get his teacher laid.

On the first day of class Eugene asks the kids to consider trying to make a difference in the world.  It’s not in the result, just the attempt, but as Arlene tells him her son, once given an idea, will run with it even if that means running into a brick wall (aka life).

Trevor bikes by a homeless encampment and befriends Jesus (Jim Caviezel), a man with a heroin addiction, and gives him food and shelter for the night.  Jesus will return the favor by fixing Arlene’s car, but then he will relapse and help Trevor think that his good will was all for naught.  Later, when things start looking up again, Jesus will save a woman’s life on a bridge outside of Portland (I like to think he was about to wander into a Gus Van Sant movie).

At most every turn Trevor finds a reason to think he can’t make a difference in this chaotic little world.  He tries to help his friend Adam not get beat up by a group of bullies, but he continually fails.  He then tries to help his teacher by setting him up with his mother, though this takes some time to take flight.

That’s because Eugene is covered in burns and self-conscious about them.  Like with Arlene’s drinking problem, this is Eugene’s problem, the thing he needs to learn to deal with and will by the end of the film.

Part of the reason a movie like this, despite all its good intentions, can feel so groan-inducing is because it’s, well I don’t know, it just makes it seem like every person in the world is defined by one flaw and can overcome that flaw if they just make the effort.  It’s a hopeful story, I suppose, but it’s also wildly inaccurate, at least based on what I’ve observed through life (granted my perception of the world may also be wildly inaccurate and probably is).

A story like this simplifies conflict, and it does so just to make it clear that conflicts can be overcome.  It simplifies an issue in order to better tackle it.  And that’s it.

There are nice little moments within this film, some great acting to be sure, but it just feels so divorced from reality.  That’s most of the film, and then you get to the end where, well something happens to the cute kid, and it’s so contrived, so insane, so improbable, so silly that it just vanquishes any spell the movie may have had over me.

It’s the type of sad ending that feels completely unnecessary to the heart of the story, a supposed gut punch that isn’t earned.  The point had been made, and then a little kid gets stabbed.  I hate it.  It’s similar to my reaction to the end of A Star is Born but only, in that case, because I didn’t think the end to that one character’s arc was well established early on.

In both cases such a coda feels like a sticky note stapled onto the last page of a novel.  That being said, such a plot turn does give us my favorite part of the IMDB trivia section for this movie: