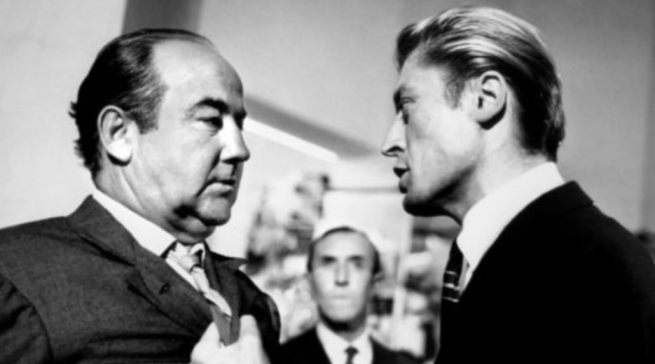 Federico Fellini has a knack for making something simultaneously silly and heartbreaking.  Oftentimes this is thanks to the wide, doe eyed look of Giulietta Masina (his wife and frequent collaborator) and an apparent willingness to make things bleak.

Il Bidone begins more on the silly side, with shades of heartbreak.  We watch a group of scam artists who in their certain joie de vivre are kind of fun to hang around with.  They dress up as a priest and two clergymen, but when we see just how pitiful their targets are it becomes quite sad.

The three men are led by Augusto (Broderick Crawford), a 48 year old ‘staring death in the face’ jaded middle-aged man.  The other two are younger and more carefree, at first somewhat innocent though such ‘charms’ only become more sinister over time.  These two are Picasso (Richard Basehart) and Roberto (Franco Fabrizi), and while their ups and downs are tempered by selfishness and shortsightedness, it’s Augusto whose character arc turns him from someone demanding our repulsion to our sympathy.  That being said when the film ends there will probably be some disagreement among the audience as to how much of that sympathy he deserves.

There are three big scam sequences in the film, but it’s in the downtime between them that we learn about the three scam artists.  We follow Picasso home where he lies about the money to his wife (Giulietta Masina in a small role), pretending he’s a traveling salesman to justify all his time away. As time goes on and his wife becomes more attune to his criminal activity, she will threaten to leave him.

Picasso is on one of a life of which Augusto is already on the other side.  The older man reminds Picasso that this is a young man’s game and that to truly succeed you cannot have attachments back home.  With this in mind Picasso will back out while he still can.

For Augusto it’s too late.  He will try to step away from the game too, and when we learn that he has a daughter (whom he presumably hasn’t seen in years) it acts as a wake up call, a last sense of hope he can cling to.  While they are at a movie theater one fine day, however, the victim of one of Augusto’s schemes recognizes him and turns him into the police, his daughter watching the whole event unfold.

His hopes dashed, Augusto returns back out onto the road but with a new group of scam artists.  They conduct the priest and his clergymen scam which we watched in the first sequence of the film, and this time the irony of Augusto playing a priest increases tenfold.

When the pitiful family they scam asks him to bless their crippled daughter, Augusto concedes and then has a striking conversation with the optimistic young woman.  He first plays his part dutifully but soon confesses to her that no one is really happy, and in doing so expands on his own self-loathing and fear of where he’s gone wrong.

In the end he will tell the rest of his crew that he couldn’t take the money from the poor family.  They don’t believe him, and after chasing him down a mountainside and throwing rocks (back to the silly), they find the money hidden in his shoe.

So Augusto is left on the side of the road, beaten and bloodied and calling for help which doesn’t come.  It’s a sad image of a sad man who lied not only to his fellow scammers but also to the audience as well, with us having bought the story he told them about being so moved by the young, handicapped girl.

I sure as hell feel sympathy for Augusto, mostly because he antagonizes a group of people who are easy to loathe and in doing so seems to rise above the muck, maybe having even changed his ways.  But he did steal the money, which he could’ve returned, and no matter how good his intentions may have been (to help his daughter financially), it doesn’t lighten the burden of his crime considering just how broke the family is from whom he stole it.

Il Bidone, I suppose, operates on two levels.  One is the story of a man coming to terms with his own mortality and trying to find meaning in his work.  In this sense it doesn’t matter what Augusto does, only that he’s lost, nearly at his wit’s end and begins to reconnect with his daughter.  In her he recognizes a way out, at least spiritually.  He can continue his thieving ways, but as long as he gives her the money and finds value in such an endeavor, then maybe it’s just enough to keep on living.  It’s likely the same idea Picasso had, but once his wife learned where the money came from she put her foot down.

The other level concerns the world of the film, the socioeconomic factors that cultivated a certain desperation among the masses which Augusto and his crew were then able to capitalize on.  Their swindling ways are most effective directed at people in the lower class who are eager for an authority to prostrate before, in a sense.  One of these power structures is the church, hence the priest and his clergymen routine, and another is the bureaucracy which decides which families will be placed in newly constructed apartments.

In both cases Augusto and company disguise themselves as officials with a degree of power and offer momentary hope to those desperately searching for it.  These are people poor and displaced by the post world war II landscape, at least based on my reading of it all.

It’s a wild, wild west of poor souls desperate for anything to cling to.  They don’t have it in their heads that anyone may be misleading them, no matter how ‘too good to be true’ it may seem.  To them anyone claiming to come in and help them out must be telling the truth, but everyone we see pretend to have the answer is really just preying on their gullibility.  Extrapolating on this, all we see are people who need help and people taking advantage of the people who need help.  If there were positive work programs or government forces there to make the lives of some easier, we don’t see them.

Augusto and his crew get away with their scams so easily that the only force working against them is mostly internal.  It’s perhaps a Catholic sense of guilt that does them in.  Part of it, to be sure, has to do with the disappointment of people who matter to them, but this creates in them a deeper dissatisfaction that can only come from within.  There is no police in the film, no embodiment of the forces designed to keep them in line.  All we have are the criminals and their increasingly troubled minds, suggesting that such conditions enabled crime to run rampant, but it’s not in our psychology to get away with such behavior.