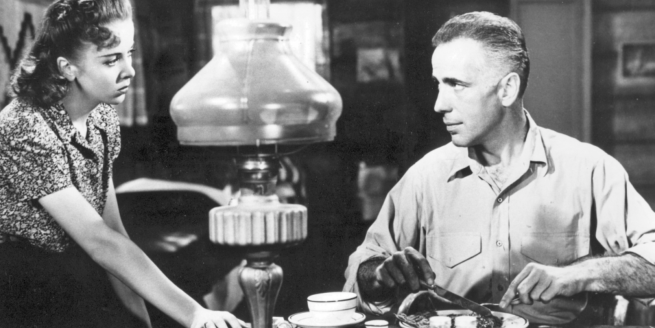 “It’s infernally cold up here, maybe it’s nerves.  The rock above, where Earle is hiding looks like a huge ice berg.  Whenever the flares are lit, the faces of the crowd gathered around here look like great masts of snow.  They look dead, all but their eyes…” – Radio Reporter at the scene.

Roy Earle (Humphrey Bogart) is a John Dillinger-esque criminal released from prison when the film opens.  He is re-introduced right back into his old ways, leading a heist at the request of an aging gangster.  Earle accepts the assignment, as if he has no other choice, but he will soon find that he’s working with three fresh-faced, volatile men, a woman who quickly fancies him (Ida Lupino) and a dog.

That might sound like the lead up to a punch line, and it certainly does to Earle who muses on the unlikeliness of such a set up, particularly considering he plans for this to be his last heist.

As Earle makes the long drive to California from the prison where he’s released, he will stumble across an elderly couple and their granddaughter, Velma (Joan Leslie), who walks with a severe limp.  After saving their hide twice over, Earle set his eyes on Velma and offers to pay for the corrective surgery to help her walk again.

This would seem to be the beginning of their whirlwind romance, the charismatic gangster and the sheltered midwestern girl.  They will be star-crossed lovers for whom fate intervenes when the gangster inevitably gets caught up in a barrage of bullets while on a heist.  If it weren’t for his line of work, everything would be perfect.

Except that’s not where this is headed.  Earle does propose marriage to Velma, though he does so only after the successful surgery.  She tells him that she has a boyfriend back home, somewhere in the midwest, and that it seems they are quite serious.

Earle doesn’t take this so well, and so with disappointment he returns back to the mountains in which he was hiding out with his crew before the robbery.  As this is going on two of the men in the crew took to beating up Marie (Lupino), and when Earle shows her a kindness they don’t, she falls for him.

Suddenly we have ourselves a good ‘ol fashioned love triangle.  Earle pines for one woman, far away from his criminal way of life, and endures the unwanted affections of another who is right there living the same life he is.  It seems there is a double standard somewhere in his psyche, a judgment cast on Marie for involving herself with people like Earle or, more likely, the men he’s assigned to work with.

The robbery will take place pretty quickly and involve a couple sudden shooting deaths, those old 40’s era cinematic deaths where the person shot grimaces and clutches their blood-free stomach before falling to the ground, as if they learned how to “die” from watching time-lapse footage of a plant shriveling up.

Earle and Marie will depart in one car with the other two men in another.  Those two men take a wrong turn, hit an embankment and die when their car explodes.  This would seem to leave Earle and Marie in the clear, at least until the fifth member of their team, Mendoza (Cornel Wilde) rats them out.

The third act will then follow Earle as he puts Marie on a bus out of town and then runs from the cops, ascending the highest peak in California before he is gunned down.

Before that, however, Earle will be reminded that any lingering hopes for a relationship with Velma are moot, and then he will propose to Marie.  What I can’t quite tell is if we’re supposed to now think they are the star crossed lovers we expected, or if we should see his relationship with Marie as hollow and doomed, as I did (similar to the end of James Gray’s Two Lovers).

Is Marie really just meant to be a replacement for Velma, suggesting that Earle still gets what he wants?  Or is Velma there to make the final romance feel like a disappointment? The film advertises Ida Lupino above Joan Leslie, suggesting that she is the romantic lead, but their eventual union and then respective tragic endings are grandiose enough that the relationship feels much more romantic in hindsight, only once it’s taken away.

So there’s something interesting going on here, maybe about myth and nostalgia.  The demise of Earle and Marie creates as mystique around their relationship which we, the audience, saw right through.  We know Earle had his eyes set on Velma (though this dynamic was problematic in its own way due to his forwardness and her lack of a response), and we know that Marie could tell.  We see the problems of what will become their paper thin relationship, but to those in the world of this story they will go down in flames like Bonnie and Clyde.