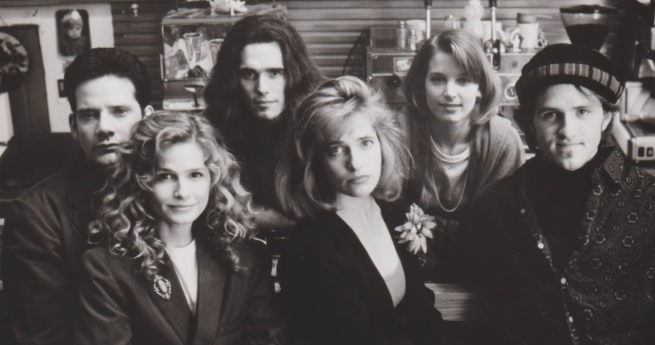 Singles is a tough hang.  It’s deeply immersed in the same Gen X culture as Reality Bites, Slacker and the tv show Friends, but Cameron Crowe’s second film has none of the commentary or unbridled energy of those films (and show).

We’re presented with a specific time and place, much more about the atmosphere than any particular character, but the twenty-somethings who populate this version of early 90s grunge-infused Seattle all fall a little flat.  They are friends living in a quaint brick building with a Rear Window-inspired courtyard that seems a perfect set for a primetime sitcom.  The stories follow this group in their various trials and tribulations as they pertain to romance, but each of the relationships feels short changed for one reason or another, and taking a step back the story neither elevates nor analyzes their romantic entanglements.  In other words, I had a hard time rooting for them or understanding why we should care.

There’s something appealing about these hangout movies, at least in theory.  The characters would seem to be interesting, in the same way as Fast Times at Ridgemont High (written by Crowe) and the films I mentioned above.  These Gen X movies are more concerned with the group than the individual, and they all seem to have a grasp on where these characters fit into the bigger picture.  That’s because these characters, in some way, are defined by how off center they are.  They exist on the fringes of society, and the final shot of this film lifts away from their shared apartment building to show us where they are in relation to the rest of the city (namely the city’s skyline).  The lasting impact, I believe, is that we see their unique little lives in the shadow of the big city, like they’re living in secret under a sleeping giant.

Except the two main characters in this film are yuppies.  They already have mainstream jobs that are only defined enough to make them seem like career people.  Steve (Campbell Scott) wants to make a “super train,” and he’s in an office position which seems to allow him to make this dream come true, while Linda (Kyra Sedgwick) has a job that allows her to go on month-long research trips.  Basically they seem to have graduated college and fallen right into their dream jobs.  All that’s left is for them to fall in love.

And that surely seems representative of the times, at least for a certain type of person, but I have a hard time buying into their ups and downs.  Instead they seem ripe for critique.  That’s not to say the movie has to be cynical (Crowe’s movies certainly are not), but it does seem to find these self-important, privileged characters more interesting than I think they are.  That is, of course, subjective, but for the entire runtime of this film I didn’t care to know what happened to these characters as I did with the two romantic leads of Crowe’s Say Anything…. It might be a problem of casting, in fact I think it is.

The other characters are more interesting but just as short changed.  They actually are on the fringes of society, at least white society.  They are just as privileged but more clearly in points of transition.  One of them (Bridget Fonda) works at a coffee shop along with an on and off again boyfriend (Matt Dillon) who is in a rock band in the mold of Nirvana, Pearl Jam and Soundgarden (the other members are played by members of Pearl Jam before they hit it big).

I found them to be the most engaging characters in the film, but one of the plot points in their underdeveloped relationship is that she is convinced the only way to get his attention is to get a boob job.  She won’t, and she decides she’s better off single, then she will fall back into his arms, and we’re supposed to be happy about it.

There’s another character looking for love, and I forget her name because she has such little screen time.  There’s a scene in which she asks to be seated on a plane next to someone single. She sits next to a boy Casanova, and it’s supposed to be a funny moment, but it all just feels tired and far too broad for how sincere this film claims to be.

So that’s my big complaint.  We’re asked at once to really empathize with these characters, and then there are occasional moments that try to laugh at them.  But even still, these moments ask us to care about their plight, as if we can relate to that struggle (“oh I’ve been there!” kind of a thing).  The movie buys into their struggle without ever asking if it’s really that much of a struggle, particularly since they all get what they want.

Singles is just not the movie for me, though it does seem to capture some sense of the early 90s culture, though not enough to give the story anything of substance.  Instead it feels like an unfunny Saturday Night Live sketch that goes on far too long.

Oh, there’s also a storyline that involves Linda getting pregnant, then getting into a car accident and losing the baby, and I almost forgot that happened.  Maybe my memory is just that bad, but I think to introduce a story turn as tragic as that must be given more weight than Singles offers.  Instead she then leaves for her trip, comes back and she and Steve decide to be friends.  The miscarriage is used as a stepping stone for their “will they/won’t they” relationship, and that feels a little insincere.

Slacker, to me, is the definitive Gen X movie.  Like this one or Reality Bites it bounces around a lot of characters (though a lot more), and it quickly introduces you to some of their quirks without spending much time with them.  Instead you get a sense of where they fit in (or don’t) in the world because of the surprisingly large scope of the movie.