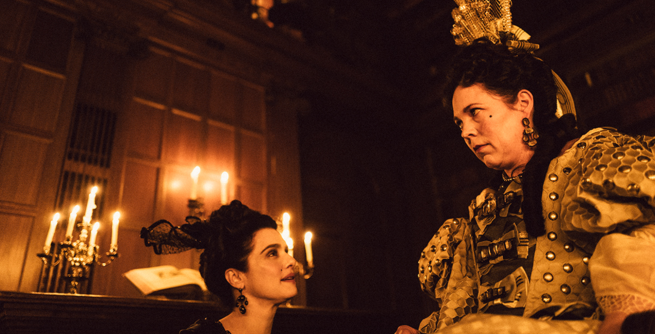 Olivia Colman deserves to win an Academy Award for her performance as Queen Anne in Yorgos Lanthimos’ The Favourite.  She is the eye of the storm, around which chaos and politicking runs rampant.  While two politically opposed party leaders vie for her attention she deals most immediately with two people who scheme to be in her good graces.

Of these two characters, Lady Sarah (Rachel Weisz), is her closest friend, though her true allegiances, as she says quite candidly, are to the country.  She is painfully honest with the Queen, but they’ve had a working (and romantic) relationship which has flourished because of such no nonsense.

The other is a newcomer, Abigail (Emma Stone), a former Lady who fell upon hard times after her father gambled her away.  She arrives at the palace as a servant but is guileless and stubborn and slowly makes her way up the food chain until she finds herself doting on the Queen, who enjoys her shameless affections, no matter how insincere they may be.

Each identifies in the other a nemesis, and the entire film is constructed around their power struggle.  In the midst of this the Queen would seem to be a feckless, oblivious character, but she is quite aware of the ego, backstabbing and jealousy going on around her.  As Sarah notes, she quite enjoys it.

The Queen is a tragic figure, and in The Favourite much of the comedy is derived from a certain degree of darkness.  The Queen collects rabbits, an absurd and amusing sight at first glance, though she later tells Abigail in one of the more moving scenes of the movie that she has one for each child she has lost.

For Abigail’s part she acknowledges with little emotion the ways she has been mistreated in the past, starting with her father gambling her away and leaving her to fend for herself.  Whether it started then or long ago, she became a hardened soul, something like a feral animal who will do whatever it takes to survive.  As she makes quite clear, she is only in it for herself, no on else.

Lady Sarah has noble ambitions driving her actions.  She may enjoy a certain degree of intimacy with the Queen, but we get the sense it is all in the name of service to her country.  She runs the day to day operations for the Queen, most notably an ongoing war.  We’re led to believe that she is acting selflessly when she makes a plan that would send her husband to the front lines, all sacrifice for the greater good.

Lady Sarah slips up when, hoping to do what’s best for the governed, she makes a plan without consulting the Queen.  This offends her majesty and causes a rift into which slides Abigail, holding it open when it might otherwise have been easily paved over.

The Queen requires a certain amount of affection.  She is a haunted soul, lonely and depressed, and though she needs the wise guidance of someone like Sarah, more immediately she craves the flattery of someone like Abigail.

The Favourite is a very funny movie, and it’s certainly branded as a comedy, but with that comes a much darker streak, and the film ends on a rather melancholy note.  This should be expected when considering Lanthimos’ other works, including The Lobster, The Killing of a Sacred Deer and, most of all, Dogtooth.

It’s hard to throw any of those movies under the same umbrella.  There is comedy in each of them, but this is by far the most overtly comedic.  The Lobster has a dry wit to it all, but it’s an uncomfortably dystopian world.  The Killing of a Sacred Deer is a psychological horror movie that makes you laugh from the same kind of discomfort, and The Lobster is a whole different beast entirely, though the comedy derived from discomfort certainly remains.  The constant between all of them is that they depict isolated worlds, in which the rules that apply here may not apply outside.  They are instead disturbing games and mazes to be played and traversed.

The Favourite is a beautifully shot and assembled comedy.  The soundtrack consists of dark, pulsating, ominous tones, and some shots look taken straight from a horror movie.  It’s filmed most often in wide angles, sometimes even with a fisheye lens, and this accentuates an intimidating quality in all of the performers.  They are devoid of humanity, in search only for power and control, and the way the camera moves, glides, sprints and pans helps you feel the frenetic, stressful energy that must bubble in their veins.

In the end, however, nobody wins.  Power, like anything, is fleeting, it’s a breeze that passes you by.  When that’s all you crave, you will amount to nothing in the end.