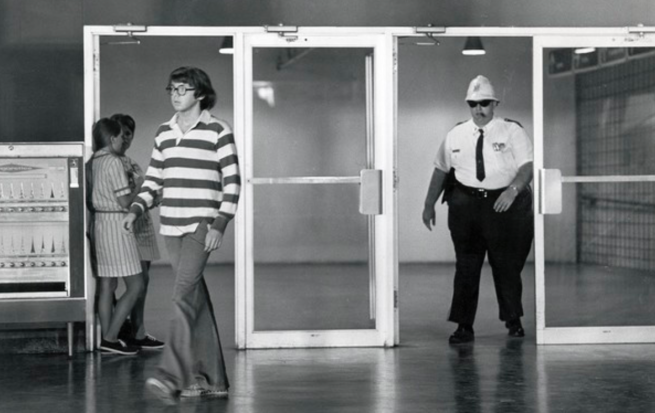 The dreamers don’t win in Robert Altman’s mind bending, logic-defying, establishment-challenging Brewster McCloud.  The slapstick story, complete with gags straight out of Wile E. Coyote and the Road Runner (similar to Peter Bogdanovich’s What’s Up Doc?) combines farce with pathos.  It’s the story of Brewster McCloud (Bud Cort), a lonely young man who doesn’t seem to realize he’s lonely until he gets a taste of love.  Also, I kind of buried the lead, but he thinks he can fly, and he might be right.

Brewster doesn’t speak until 22 minutes into the film.  For much of that initial run he is tangential to the main action.  He lives in Houston’s Astrodome (former home to the Astros and Oilers) and is obsessed with birds.  When the film opens we watch as a woman sings the National Anthem off key and then criticizes her accompanying band, bringing race into her complaints.  From his home far above, Brewster expresses some disgust with her behavior (or just her singing) and soon she winds up dead, covered in bird sh*t.

The rest of those first 22 minutes show him driving around a rich, crotchety old man (who provides one of the best sight gags as his wheelchair and long white hair cruise down a freeway off ramp) who harasses the nurses, throws slurs towards the silent Brewster and, like the singer, is an all around racist.

It’s not until the end of this prologue, of sorts, that we begin to understand what Brewster’s story is about.  This first section of the film instead sets up the broader world and themes at play.

We open with the famous MGM lion roar, only instead of the roar we hear “I forgot the opening line!”  Then we get a flashy credit sequence featuring the national anthem, but when the aforementioned singer loses her cool, she restarts the anthem and thus the credits start all over again.

I supposed Brewster McCloud is defined by the mistakes people make.  To jump ahead, the heart of the story concerns Brewster’s attempts to build for himself wings so that he might fly like a bird.  He will, for a few minutes, before crashing down to his death, right around second base.  It’s a grim but amusing joke which falls in line with the rest of the film.

Along with Brewster’s story we follow the arrival of a legendary San Francisco detective, Frank Shaft (Michael Murphy) who is in town to investigate the recent run of stranglings, including most recently that National Anthem singer.  We will have reason to think that either Brewster is the killer because the victims, all bigoted and racist in their own ways, are people he runs into.  That being said we never see him kill them, and one explanation is that their deaths are the result of some kind of karmic force overseen by the birds above (who mark them before they die).

Frank Shaft is considered by those in power to be the best and the brightest, and his silent manner won’t make us think otherwise.  It’s not until at least halfway into the film, however, that it begins to look like he truly has no idea what he’s doing.  He spends most of the investigation trying to get a sample of the birds*t which marks one of the victims, and all the lab analysis says is that yes, it is indeed birdsh*t.

Following a long car chase (with Shelley Duvall as the most unlikely getaway driver of all time) in which he fails to catch his man, Shaft will unceremoniously kill himself in a moment that is both dark and hilarious.  Well the whole film is dark and hilarious.

So Shaft fails, and Brewster of course fails.  In between Shelly Duvall plays Brewster’s first love, though she quickly returns to a former boyfriend who gives her the cold shoulder, we’ll watch the politicians fail to convince Shaft to get a drink with them (it’s important who you know) and then accuse him of thinking selfishly when he won’t.  One of them dies, alongside the handful of other deserving victims.  We’ll similarly see Brewster’s guardian angel simply walk out of the story after the young man she’s devoted her life to turns his back on her (because he’s fallen in love).  An inmate steals a couple joints and is, I guess, re-arrested, and in one of the funnier recurring gags a Winston Churchill-looking security guard at the Astrodome continually fails to catch his Waldo, aka Brewster.

Wait, now that I think about it, is Brewster McCloud the basis for “Where’s Waldo?”  Brewster wears the same exact red and white striped shirt, helping him stand out, but I assumed this was a nod to the famous children’s book character.  “Where’s Waldo?” however doesn’t seem to have been released until 17 years after this film. 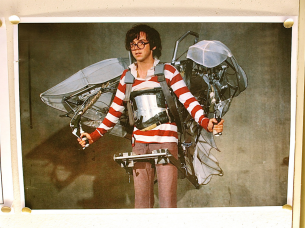 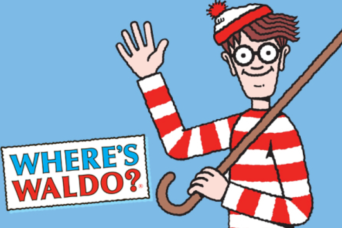 Whether or not he’s Waldo, he’s found.

Despite all the slapstick elements of Brewster McCloud, there is some real heart to the story.  Brewster is a strange little character, a mostly silent, occasionally emotionless protagonist, often in the mold of a Robert Bresson character.  He doesn’t react the way we expect a rational person to react.  I suppose that begins with him living in the Astrodome and building wings to fly.

He isn’t quite an adult, but he’s too old to be a child.  Brewster holds onto the fantastical imagination of a child, but he’s apparently old enough to do something about it.  In his nest atop the dome he builds large, impressive mechanical wings, showing that this isn’t just some phase he’s going through, or if it is, it has lasted for quite some time.

Brewster is a dreamer, an artist of life who doesn’t realize that he is the art installation.  It’s his attempts at flight that are meant to be quite beautiful, and they are, recognized not only by director Robert Altman but by a benefactor, Louise (Sally Kellerman).  She’s the guardian angel who helps him out anytime the authorities are after him and whose possibly mystical power is responsible for the mysterious deaths that have taken place throughout the film.

Such a pure soul Brewster seems to be that it’s she who acts as his invisible shield, taking care of anyone and anything that would get in his way.  She herself is a dreamer though apparently unable to pursue the same heights as Brewster.  She sees in him a refusal to accept what’s made to be reality and fans these flames, hoping he can accomplish something she can’t.  When Brewster, in her eyes, does accept reality it’s because he’s fallen in love with Suzanne Davis (Duvall).  This type of romantic love, Louise says, is unfortunate because for mere mortals it is the best we can come up with, the most we can strive for.

To be in love is to accept the limitations of our own bodies and our own world.

And yet, Brewster then flies.  He gets his wings out for her, but she’s so sure he’s crazy that she calls the cops, and instead of using his wings to soar, he must use them to escape, just another means to an end.  He flies for a few minutes, though only in the confines of the bird cage-like Astrodome, before he comes crashing down to earth.  The system wins, yet again.