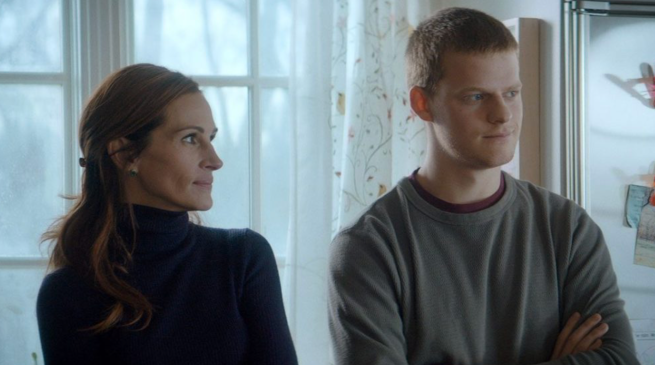 Ben (Lucas Hedges) is an addict, with 77 days clean, when he unexpectedly shows up on his family’s doorstep on Christmas Eve.  His arrival is both joyous and foreboding, and the nature of his sudden appearance will be up for debate.

Ben Is Back seems to exist in a Pottery Barn catalogue.  Somewhere in upstate New York the snow is only ever a comforting blanket and never a nuisance, the children are adorable and pageant-ready, and the marriage between Holly (Julia Roberts) and Neal (Courtney B. Vance) is strong and supportive.  In a sense it feels like a hermetically sealed little world where little stands a chance of ruining their perfect holiday season.  That’s when Ben shows up as if in a fairytale, a hooded figure who walks right out of the forrest, with no indication of what got him there.

The first third of the film limits the scope to the family home, and Ben’s arrival feels like a hurricane, even if it’s just the eye of one.  His mother is overjoyed, laughing at every semi-funny story he tells, his sister is on edge, and his two younger step-siblings still regard him as younger siblings often do.

When Holly, who won’t let her son out of her sight for fear he hasn’t truly overcome his devious ways, takes Ben to the mall to do some shopping it feels like we’re on an entirely different planet.  Each step outside of the family home risks throwing this story off balance and taking it into a more melodramatic direction.  We meet the dementia-riddled doctor who originally prescribed Ben opioids for a snowboarding accident which instigated his addiction, and we meet a somewhat silly character named Spider (David Zaldivar).

Spider is from another movie entirely, something more along the lines of Taken, and he’s the first step into a strange, uneven but somewhat exciting second half of the film.

After an affecting Christmas Eve mass, in which the family comes together as one, they return home to find the house ransacked and their dog missing.  The spotlight immediately shines upon Ben, and he is riddled with apparent guilt (though he’s not always to be trusted) knowing that he has yet again jeopardized his family.

To make up for everything he’s done, Ben decides he must get their dog back.  It also helps that were it not for their dog he might be dead, due to the last time his mother found him unconscious and with a needle in his arm, his dog attempting to nuzzle him awake.

So then we embark on a sudden journey with Ben and Holly that re-introduces us to Pottery Barn world, though in this upside down version everyone has something to hide. It’s a strange, dark imagining of this landscape that, to me, strained plausibility.  Is there really this much wrongdoing going on right under our noses?  It’s apparently a community full of casual drug users and dealers who will turn on each on a dime and middle school teachers who trade oxycodone for sexual favors.  When Holly realizes this she throws up.

Even as the story becomes a little too forcefully heightened, I found the performances between Roberts and Hedges to be just magnificent.  They’re some good f*ckin’ actors, and I was with them just about the entire way.  The only time, again despite the plot contrivances, I felt the movie didn’t completely work was when Ben and Holly go their separate ways.

She is frightened that she’s going to find him dead somewhere, whether because of a needle or a dealer’s fist, and he is off running one last mission in exchange for his dog.  We watch Holly crumble with fear that her son is dead, but then we keep cutting back to Ben, well aware that though he is in danger he is very much not dead.  For the movie to work, I think we need to stick with Holly and feel her concern, wondering if Ben is indeed okay or not.  As it is the constant cross-cutting tries to make this more of a thriller than it should ever be and cannibalizes the tension provided by either storyline.

So I think Ben Is Back is two different movies that struggle to become one, but the performances and overall writing is good enough to overcome the shaky handoff between the two.  As the story goes on it loses a bit of its own rhythm but it never quite goes off the rails.  If Ben Is Back can be symbolized by an Olympic sport, it would be the final, climactic bobsled run in Cool Runnings.  Everything goes well for the first half of the run, then the screws come lose, they flip upside down, but then they carry the bobsled across the finish line before collapsing.