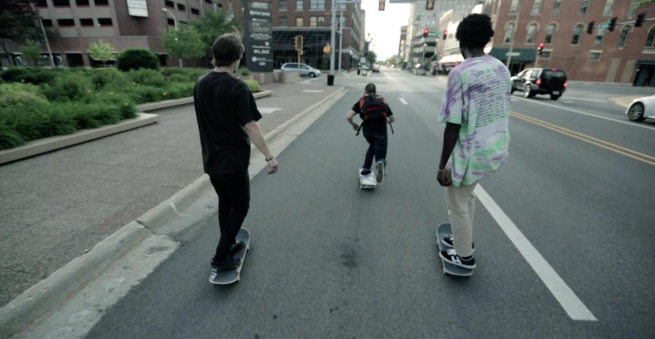 Minding the Gap tells the story of three young skateboarders from Rockford, Illinois as they transition into adulthood.  They are Zack, Kiere, and Bing, the director himself.  For all of them skateboarding is an escape from broken homes and domestic abuse.  In the case of one, a recent father, we see how the cycle of abuse continues and becomes systematic.

The documentary has much in common with 2014’s Rich Hill, another movie that chronicles the intense poverty of a middle American town through the eyes of the children who grew up there.  In each case the story unfolds over time, months in the case of Rich Hill and years in the case of Minding the Gap.

I’m a sucker for a good time jump.  Like I love it.  I can’t get over the power of a simple cut between two shots in which all this time has passed.  We see it a lot here, often with Zack.  When we meet him he has a mustache and long, thick hair.  Throughout the documentary he will alternate between mustachioed, clean-shaven and unkempt.  His hair will fluctuate, and at one point he shaves it all off, only for it to quickly grow back in as we jump through the next year.

The time passes even more noticeably with his young son, Elliot.  We meet Zack and his girlfriend, Nina, when she’s pregnant with their son, showing us an ultrasound of the unborn baby, and by the time we leave them Elliot will be walking and talking and tinkering with a skateboard of his own.

To me you could make just about any subject interesting if you follow them for this long. Watching people change, for better or worse, is just so inherently fascinating.  Seeing the way a person changes, even if it’s just a haircut, is interesting.  We all go through so many role changes in our own lives, and yet most of these are invisible.  We don’t realize the ways we are changing even as they are happening.  We might feel the incline or decline of this given moment in life, but we can never seem to anticipate those rises and falls leveling out.  When you zoom our far enough it adds up to some kind of stock market-like graph that you can only really appreciate from such a distant vantage point.

Minding the Gap is more than that, however.  These are some fascinating kids, charismatic in their own ways and certainly vulnerable in front of the camera.  At one point each of the three characters experiences some kind of raw, visible emotion.  Two of them tear up when considering both the past and future, and the director himself films a heavy conversation with his mother in one of the most open and yet perhaps contrived sequences of the film.

I only say contrived because personally I don’t like when the director becomes a character in his or her own film, a la Michael Moore.  I’m a fan of documentaries like those by Errol Morris or Kirsten Johnson’s 2016 film Cameraperson.  These types of movies do all they can to remove subjectivity from the film, granted you can only remove so much.

In Minding the Gap Liu makes himself a character, which I think for many will work just fine, and should.  I only recoil from such intervention because I can’t help but feel that it’s a little manipulative.  In interviews Liu has explained his reasoning for including the conversation with his mother and his attempts to remove control from the framing of himself, i.e. by letting someone else film him.

When you hear him talk about how important this subject matter is to him, it makes sense that he include his own experience in the movie.  Liu uses his own firsthand account of domestic abuse at the hands of his step-father to tie the narrative together and identify the common through line between his story and Zack’s and Kiere’s.

Zack and Kiere, the most visible of the three characters, certainly inspire our empathy from the beginning.  They are charming and innocent, and watching them glide gracefully through a mostly empty city is beautiful purely from an aesthetic standpoint.

Kiere, only 18, dips his toes into adult waters, getting his first “real job,” and struggling to find time to skateboard.  Zack struggles admirably with raising a child alongside his girlfriend.  Despite the tough circumstances he and Nina seem a confident, even if naive, young couple, and it’s hard not to root for them.

As we jump forward in time, however, a more troubling side emerges.  Their relationship hits the rocks, and we only hear from each of them long after the initial rift has occurred.  Both Zack and Nina are quite candid about why it’s not working, but it becomes clear that he is hiding something, the truth of which Liu pursues delicately but firmly.

The result of all this is a troubling portrait of life in such a place.  We feel the weight of what these kids are up against, falling into preordained patterns and ways of life without ever seeming to have the chance to get out.  In the case of Zack, who alternates between jobs at a roofing company and a sandwich shop in Denver, he struggles to dig himself out of what we perceive to be a hole, particularly as he becomes more distant from Nina and his son, whom we hardly see him share screen time with later into the film.

Zack begins to resemble the Dennis Quaid figure from 1979’s Breaking Away, a troubled, angry young man who perceives a certain injustice in regards to his social standing.  In his anger he seems to deflect much of the blame from himself, but he’s also not completely wrong.  We can also sense the pain he feels underneath, the fuel for such anger.  Near the end of the movie he will admit to feeling like a failure in some sense and not knowing how to get out of it.

Minding the Gap is an empathetic view of people living in very tough circumstances who aren’t completely innocent themselves.  They are so firmly entrenched in this systematic web of economic struggle that we see how easy it is to fall in line and perpetuate some of the things you’ve suffered in your youth.  It’s not so simple, to endure and then get out.  For some you endure and then hit right back, but the characters of Minding the Gap demonstrate a level of introspection to inspire hope that the cycle may end.