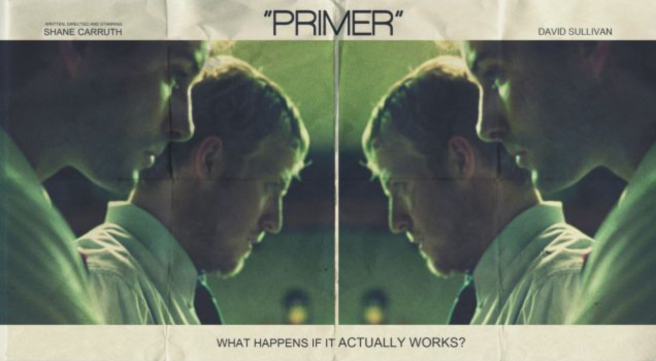 Primer opens with what has become a familiar image: young, aspirational start up employees working in their garage.  Whatever they’re working on doesn’t much matter because soon they stumble into time travel, and of course that captures their imagination.

They are Aaron (Shane Carruth) and Abe (David Sullivan), and they’re almost always dressed in cheap collared white shirts and black ties, like a cartoon character that never changes outfits.  They’re friends, to be sure, but their more egotistical impulses will win out by the end, much in the way they often do in movies like this.

In these stories a certain breakthrough, the result of plenty of hard work, reveals rot within the soul.  It matters not how pure your intentions because once something gives you a leg up, you take it.  In these movies power reveals true character, and true character almost always has to do with greed and ego.

Primer is so noteworthy because of how close to the ground it seems to be operating, partially based on the film’s micro budget.  This isn’t a movie with wormholes or magic, though to make time travel work I suppose magic is implied.  Instead it’s a grungy-looking world often limited to Aaron’s garage or the insides of hotels and storage facilities.

The two friends have figured out that the machine they’ve built in their garage can move more quickly through time.  With a little tinkering they can go back in time, and soon Abe shows Aaron that there is another Abe who has, presumably, already put the time machine to use.

It follows, then, that they will hop into the machines themselves and put their ideas to the test, at first just in the way scientists do.  The plan has them hop into two time machines within a storage unit.  They will take in with them oxygen tanks and sleep medication, and when they wake up it will be earlier in the day.

Okay, wait.  I’m tripping myself up.  I forget the order with which this happens, but this process creates “doubles” of each of them.  To protect themselves from the unknown consequences of their actions, they will hide out in a motel so that they may not interfere with the world or their doubles.  Then they will head to the storage facility, hop into the time machine and then become those doubles.

Such time travel affords them about twelve or so hours, maybe it’s six, but it’s certainly no more than twelve.  With this knowledge they will invest money in stocks which they know will double in value, but they make sure only to pick the stocks whose prices won’t be affected by their contribution.  The goal is to benefit from what they can do without interfering or creating nay butterfly effects in the world.

It’s engaging because of how detail-oriented is, but at a certain point Primer leaves you in the dust.  The characters will find reason to suspect each other of undermining the other.  When they discuss what they might do with this power, one suggests he would assault someone he loathes.  He insists he’s joking, but his friend feels very strongly that if he were at least considering it, then maybe one of his doubles, with slightly less impulse control, might already put such a plan in motion.

Their finely tuned experiment is starting to get out of control, and the movie’s intoxicating attention to detail suddenly feels like a drug high gone wrong.  We are presented with ostensibly logical steps about how time travel works or has been working within the film since before even we knew it was happening.  The movie creates a web in which it traps the viewer, seemingly on purpose, and by the end, well at least for myself, I had no idea what was happening.

That’s because the final showdown, of sorts, involves a house party, a woman and a shotgun.  These are characters I either barely knew or had just forgotten about and a smoking gun which never seemed to be smoking in the first place.

The confusion seems deliberate, though the puzzle pieces may still be there.  Either way it doesn’t seem intended to be solved and instead just a confusion meant to be experienced.  The control Aaron and Abe had in the beginning quickly vanishes, but later story turns suggest Aaron, at least, was never in control to begin with, that they were themselves the doubles of earlier iterations of Aaron and Abe.

Primer is pretty gripping as a story and incredibly inspiring as an example of low budget filmmaking.  It’s delirious, a bit unhinged (in a good way) and entirely committed to its own world.  The time travel of this movie, no matter how convoluted, at least feels thought out.