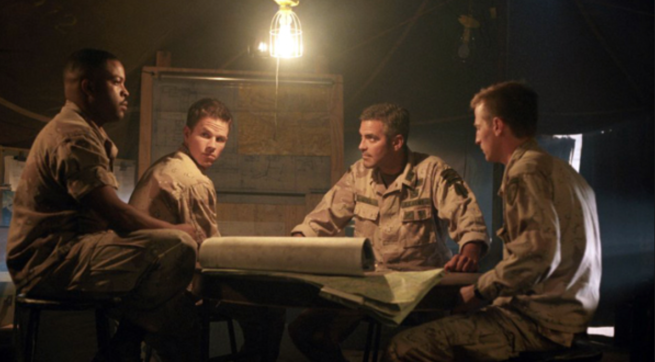 In Three Kings four U.S. soldiers celebrate the end of the Gulf War by hatching a plan to steal Saddam Hussein’s gold.  They will find a map rolled up in a man’s ass and quickly determine what this map signifies.  Then the four soldiers of varying ranks head into a small town, find the gold and try to ignore the greater conflict going on.

The Iraqi Republican Guard, with whom they now have a ceasefire, are in the process of interrogating a man, Amir Abdulah (Cliff Curtis).  Amir’s wife pleads with the U.S. soldiers not to leave.  Though conflicted they’re determined only to get the gold, which Saddam’s forces actually help them gather, at least until one of the men shoots dead Amir’s wife.  This leads to a standoff which gives way to a deadly altercation that breaks the ceasefire and commits the soldiers to freeing the Iraqi prisoners.

The soldiers are Archie (George Clooney), Chief Elgin (Ice Cube), Troy (Mark Wahlberg) and Conrad (Spike Jonze).  They are eclectic and for the most part unable to grasp the seriousness of what’s going on around them, at least not at first.  Conrad is the most immature, I’d say, but he’s not the only one of them to regret not seeing any action in battle.  These aren’t your thousand yard stare, haunted veterans but rather more like teenagers playing Call of Duty.

They hunger for battle, and their views of the ‘enemy’ are quite simplistic.  Though they will observe the conflict before them, it takes some time before they fully empathize with the recently freed prisoners whom their government had sworn to protect.  Of course, this makes their eventual arc much more pleasing as they end the film selfless and heroic.

Three Kings is both comedic and topical, both for the time it was released as well as today, after much more conflict in that region including a war that never needed to be fought to begin with.  This film empathizes with people who, at least onscreen, are still most often presented in an unfair light.  Whether it’s shows like 24 or Homeland, the shortcut for making a certain type of villain or terrorist is to make them middle eastern.  It’s obviously a reductive, offensive image but one this film purposefully challenges.

One of the clear “bad guys” of this film even gets time in the story to explain his backstory and how bombs dropped by the U.S. government killed his family.  We’re made to understand where their antagonism comes from.

At the same time this is a strangely funny movie.  It’s visually inventive, with squeamish and effective shots of a bullet inside a body (using an actual cadaver), and there’s an action set piece that makes use of a football bomb.

Putting those two together, Three Kings simply feels alive.  It makes the conflict, at least the action of that conflict, feel entirely absurd, but it makes the people on both sides feel surprisingly human.  The result is that war just feels all the more bombastic.

The story of the four U.S. soldiers, I suppose, is a microcosm of how war seems to get started these days.  They have greedy intentions, just to get that gold, and they are willing to use their might to find that gold.  Because this is an idealistic tale, they will put aside their greed and fight for the greater good.  It’s a screwball comedy that turns into a hero’s journey.