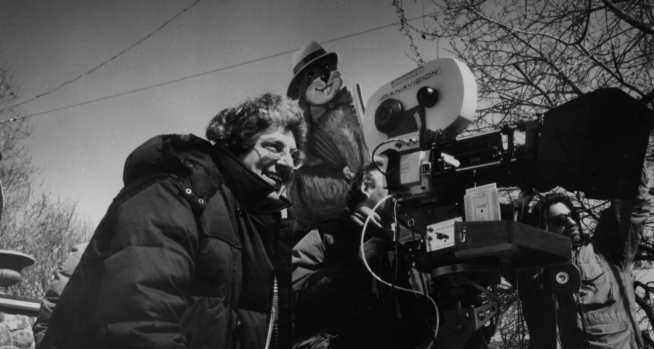 Groundhog Day is an existential comedy about a grumpy weatherman who must repeat the same unappealing day over and over again until he can figure out the right way to live.  This is a premise-driven movie that never wastes time explaining why he’s found himself in this time loop.  Instead Phil Connors (Bill Murray) must simply grapple with his situation and then learn how to endure before he can shed all ego and learn to seize the day, particularly since it’s all he has.

Phil is a curmudgeon who resents being sent to the small town of Punxsutawney to cover the local Groundhog Day tradition involving the celebrated groundhog Punxsutawney Phil.  The collective cheer is felt by everyone save for Phil.

The other important character in this is Rita (Andie MacDowell), his producer who finds joy in the smallest places and for whom Phil harbors a growing affection.  His eventual character growth will bring him closer to her, but by the time he’s able to break the loop it won’t be any sort of lust or greed which breaks the spell.  At that point their budding romance is just the icing on the cake.

During the first few days Phil will attempt to solve this daily riddle.  He tries to explain his experience to Rita, though of course it’s unbelievable and only leads him to go see a nervous psychiatrist.  Soon he will indulge in various vices, drinking to excess and getting himself arrested.  He laments his situation, and various manufactured flings with women he pretends to know (by asking them pointed questions and then using that information to his benefit the next day) can only take him so far.

Eventually he turns his sights on Rita and learns just about everything he can about her.  Creative editing stitches together this sequence so that we see him reliving the same moment over and over again but able to right his missteps and woo her with his insider knowledge.  It will work to a point, though of course such intimacy is just as manufactured as it was with the other woman he pretended to know, and eventually he accepts that it will get him nowhere (just a series of slaps to the face).

So Phil decides to kill himself, I believe three times onscreen (car explosion, getting hit by a car, jumping from a tower), basically in the most G-rated ways possible.  In the best scene of the movie Phil will explain to Rita that he has died many dozens of times, saying, “I have been stabbed, shot, poisoned, frozen, hung, electrocuted, and burned.”  He comes to the conclusion that he must be a god, not the god, just a god.

In that same scene Phil will point out just how much he’s learned.  He will walk up to each customer in the diner around them and tell Rita what he knows about them.  It’s a quick moment, but it’s incredibly wholesome and exciting if only because it adds so much depth to these characters, some of whom are given character moments but many of whom are otherwise just background performers.  It brings the story world to life.

Groundhog Day is quite good at that because every background character, at least many of them, are roped into the story later on.  One homeless man whom Phill passes every morning and eventually decides to help, dies that night.  Phil can’t accept this and tries to save him, over and over again.  No matter what he does, the man dies.

It’s the most moving segment of the film, and it’s part of his eventual kindness enterprise.  He will get every detail down to the second and know where to be to catch a kid falling from a tree, fix a tire for a group of old ladies and then to perform the Heimlich maneuver on a choking man.  Phil is there to make everyone’s day a little better.

He also finds the time (because there’s so much of it) to master the piano and ice sculpting.  He’s also probably read every book there is.

In the end it leads to one hell of a day in which Phil becomes the talk of the town.  His weather report is no longer just obligatory but rather a philosophical exercise that references Sartre and brings the gathered group to tears.  He focuses not on himself in this final day but on the people around him, bringing joy to them as if he’s just a vessel through which such positivity flows.  It’s no longer about egocentric Phil Connors because at this point he may as well not even exist.

And then he finally wakes up to “tomorrow,” for the first time in what seems to be about ten years (based on what I’ve read), finally able to appreciate the new day for everything it provides, just like every new day.  It’s a sweet ending that I can’t help but fall for every time I watch it.