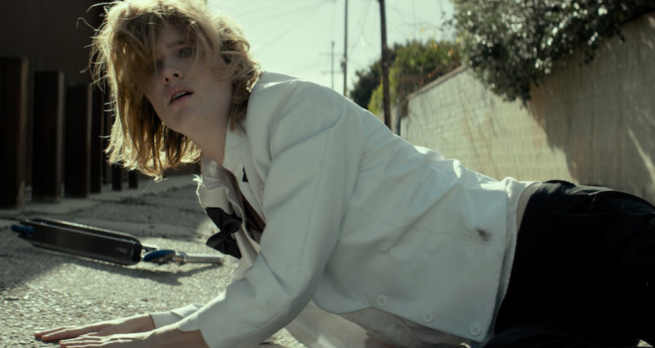 Izzy Gets the Fuck Across Town is a punk rock little movie made in the style of something from the early 90s, deeply colored with qualities of other Gen X movies.  Mackenzie Davis plays Izzy, down on her luck and stewing in her own misery.  When she learns that her ex-boyfriend Roger (Alex Russell) is to have an engagement party that night, she enlists the reluctant help of friends, siblings, former friends and strangers to make it across town in time.

This being 2017 (when the movie was released), such a task might seem pretty simple, and I did wonder why there wasn’t an easier, less stressful option to make it a handful of miles over the course of 5 or 6 hours.  Izzy, however, will mention how she’s thirty-five dollars overdrawn from her bank account, and she’s quite miserable as a person so it suddenly becomes much more understandable that there’s no one who would willingly assist her.

Izzy is a case of a nice, constructive little movie centered around a rather horrid person.  I don’t think there’s much of anything redeemable about Izzy.  Yes, she’s down on her luck, and yes she has an admirable spirit, but her goal is so clearly flawed, and everyone around her can see what she can’t.

She runs into alleged friends and family as if she’s making her way through a list of people she’s wronged as part of a 12-step program.  To everyone she runs into she is nothing but a burden, and she lives up to such an expectation.  Izzy, though, couldn’t care less.  She just wants to win Roger back and who cares if anyone gets hurt along the way.  If she had access to a car you could picture this quickly turning into Death Race, her grill covered in the flesh and blood of bystanders she plowed over just to make the previous green light.

Izzy has a lot in common with the Charlize Theron character in Jason Reitman’s Young Adult (2011).  Both set out to win back an ex-boyfriend and in so doing don’t mind ruining his present marriage/engagement.  The stories play out differently, but in the end we’re inclined to think neither has learned any substantive lesson.

For Izzy people are there to be used.  They are resources, bridges, and loan officers.  One alludes to a friendship they once had (but have now outgrown), and when we briefly glimpse the relationship with her sister (Carrie Coon), we’re led to believe that Izzy was once a respected, even liked friend, but that must surely have been long ago.  If their friendships could be foreclosed upon, they would be.

Izzy Gets the Fuck Across Town is a fun, frustrating and energetic little film.  It has an obvious energy, which director Christian Papierniak has described as like a punk concert, and it makes a good use of a surprisingly wonderful cast, including Coon, Lakeith Stanfield, Brandon T. Jackson, Alia Shawkat, Haley Joel Osment, Annie Potts and comedian Kyle Kinane.

There is a Slacker vibe to the film as a whole, taking us through the lives of all these side characters, though as seen through Izzy’s eyes, there is a dark streak running through the whole thing.  The ending feels positive but also heavily pessimistic.  Izzy isn’t alone in her misbehavior as we see people stealing and cheating through their life.  She is surrounded, it appears, by other Izzy’s.

So as a portrait of a certain young demographic in modern day Los Angeles, Izzy feels like an indictment of some sort, and yet it almost celebrates the chaos it depicts.  The movie makes mention several times of the messes we create, mostly for ourselves, and in that there is an energy almost enviable just because of how much work goes into it.  Then you take a step back and realize that life probably doesn’t need to be this hard, at least for the people we see onscreen.  For the most part they are privileged and apathetic, finding pain around every corner because they’re so quick to inflict pain on the people close to them.