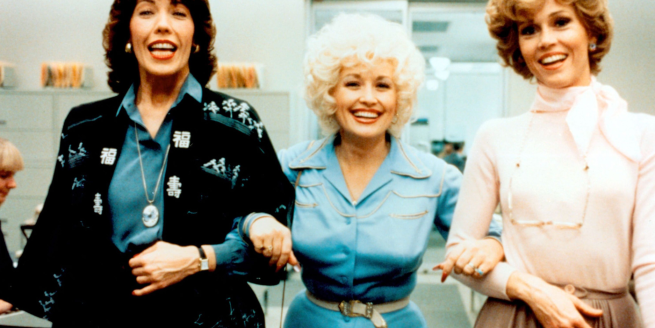 The first person we meet in Nine to Five is Judy Bernly (Jane Fonda), overdressed and over prepared for her first day of work as a secretary at Consolidated Companies, placed in a fairly intimidating but nondescript office building.  It’s one of those corporate jungles which would later turn into the mind-numbingly mundane worlds of Office Space and The Office but which at this point in time is a far bigger, more powerful machine that represented the pinnacle of western society.  When Judy walks into Consolidated Companies she might as well be pulling back the curtain on Oz itself.

Judy is new to the workforce following a separation from her husband who ran away with his own secretary.  At work she is quickly shown the ropes by Violet Newstead (Lily Tomlin), one of the longest-tenured employees at the company who has been forced to watch many a man leapfrog over her in the corporate ladder, many of whom she trained herself.

The most recent of these men is her current boss, Franklin Hart Jr. (Dabney Coleman), a “sexist, egotistical, lying, hypocritical bigot,” who heads his own department of the company.  Along with Judy and Violet, it’s Doralee Rhodes (Dolly Parton), who finds herself stuck under Hart’s thumb.

Doralee is his secretary, and thanks to a rumor spread by the boss man himself that they’ve been conducting an affair, she finds herself to be the black sheep of the office.  Even Judy and Violet, whom we sympathize with, won’t speak to her.

That is until Doralee confronts Hart when she’s had enough.  It’s the same point in time in which Judy and Violet have similarly had enough, Judy because her friend is unfairly fired, and Violet because she is passed over yet again for another promotion.

The three of them then bond over shared dissatisfaction with office life and the world at large.  They are forced to deal with a type of gross insensitivity which could drive a person mad, and in this case it nearly does.

The three women fantasize about getting back at their boss.  It’s the same basic idea that drives the dude comedy Horrible Bosses, only in this version of events we only glimpse into such daydreams.

The next day, perhaps only coincidentally, Hart finds himself in the hospital due to a fall from his office chair, and Violet is convinced that she has accidentally poisoned his coffee with rat poison.  Such a misunderstanding gives away to other misunderstandings, all of which are born only of various comic plot mechanisms.  These are the same basic devices which fuel jokes and short sketches, and here they help sustain a long middle sequence of the film which feels more climactic than it turns out to be.

Nine to Five is zany and unpredictable.  It’s a comedy with something to say about the world, and it has the same affectionate recklessness as other comedies from the decade before, like Brewster McCloud and What’s Up, Doc?  There is a certain pride, certainly an anti-establishment one, emanating from these kinds of movies, a pride I’d say you don’t find in many comedies these days.  That’s only because, I suppose, these older comedies are made with their targets set on someone or something.  They are there to deconstruct and mock and in doing so to provoke significant change, whether in policy or just in how we see the world.

It’s often funny and sometimes devastating.  Such a mindset gives away to a certain confidence to go above and beyond.  That’s why the sequence in Nine to Five which would seem to be the third act climax (involving mistaken identity, stealing a dead body and a getaway) is instead just the beginning.

This being a relatively good-natured comedy at the end of the day, things do work out for the three heroes, but there is an undeniable darkness to their story and the circumstances in which they find themselves wrapped. A long sequence of the movie involves them kidnapping their boss and then holding him hostage for a month in a contraption that seems taken straight out of Saw.

That level of darkness contrasts with an immense sense of glee that pervades the rest of the film.  The more sinister the actions taken by the characters, the more fun they seem to have.  It’s the same tone in those anti-establishment films of the 70s, in a sense suggesting as the story chugs along that the rules really don’t matter because they’re so inane.

Another reason Nine to Five works and is so fun to watch is because there is a great deal of chemistry between Fonda, Tomlin and and Parton.  They seem to be having fun with the material, and that level of joy emanates off the screen.  It’s just a fun f*ckin’ movie.