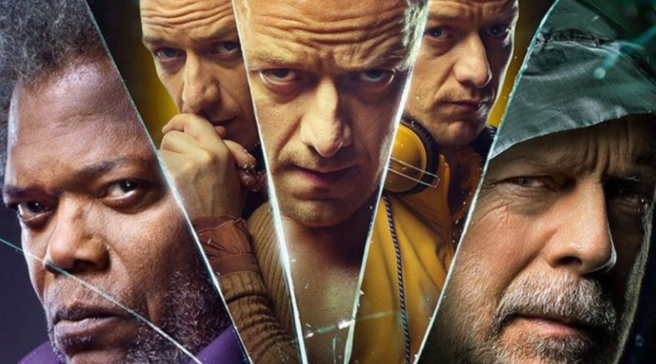 I loathed this movie, so much so that rather than assuming it’s shoddily put together it must just be that it’s not for me.  I also didn’t much care for Split (2016), so perhaps my complaints are a case of me barking up the wrong tree.

M. Night Syamalan’s Glass is as much a comic book movie as any I’ve ever seen, for better or, most often, for worse.  The titular character is Mr. Glass (Samuel L. Jackson), and he repeatedly makes mention to comic book tropes and moments, turning this into a frustratingly meta commentary on comic books and movie.  The last thirty or so minutes of the film include a frustrating amount of references to what’s happening, why it’s happening and how it fits into a pre-existing formula.  It’s what some people dislike about Deadpool, but here it’s humorless and incessant.  It’s like watching a movie with a friend who keeps whispering in your ear about who everyone is and why they’re doing what they’re doing.  It’s not for me.

The story brings together three previously established superheros/villains.  They are Mr. Glass and David Dunn (Bruce Willis) from Unbreakable and Kevin and his other personalities (James McAvoy) from Split.  The first of those movies was grim, sparse and poetic in its own way.  The latter was pulp to the extreme.  Glass leans towards the latter, even though its most active character is Mr. Glass, running the show in secret like he did in Unbreakable.  This borrows the most prominent storytelling device from the former film and combines it with a delirious absurdity of the second.

To get to the story, we have David Dunn trying to hunt down “the beast,” using the help of his son, Joseph (Spencer Treat Clark).  Pretty early on he finds him, they get into a skirmish and fall out of a window, survive, and are then descended upon by police in waiting.  From there they are taken to a psychiatric hospital and watched over by Dr. Ellie Staple (Sarah Paulson).  Also at the hospital, it turns out, is a tranquilized Mr. Glass.

So the three of them are detained and forced to confront the idea that they aren’t really as super-powered as they think.  It’s quite silly, since we’ve seen them do superhuman things like bend and destroy metal, fall out of buildings unscathed, take a shotgun blast with no ill effects, etc.  We know they’re super, and this movie isn’t going to bring them all together just to reveal that they’re actually ordinary humans.

But their character arcs necessitate that they begin to doubt themselves.  We have separate moments in which David and the Beast each wonder if they haven’t been deluding themselves this entire time… but it just feels very forced.  I didn’t believe why they would so easily fall victim to someone else’s persuasion.  I mean, I get it, I’m full of self-doubt to some extent, I will listen to someone if they insist they know what they’re doing (to a point), but there is definite evidence of what these characters can do, and for them to doubt themselves… it didn’t work for me.  And it’s important that it work, because that’s the whole heart of the story.

Later Mr. Glass will break them out of the psychiatric hospital and he will alternatively be the movie’s hero and villain.  First, he’s the smartest guy in the room, at all times, and when he outsmarts Dr. Staple we’re meant to be rooting for him.  But he also murders in cold blood one of the hospital’s attendants, a likable health-conscious guy, and then encourages the Beast to murder other innocent people.  While that’s going on we get a moment in which the Beast asks him how many more people need to die.

So Mr. Glass is the villain, clearly, but in the end we’re asked to root for him.

Look, this movie felt so incredibly scattered to me.  David Dunn gets nothing to do and is revealed to be nothing more than a pawn in Mr. Glass’ game, just like the Beast.  The two most engaging characters are reduced to nothing, and without spoiling it the end does a huge disservice to whatever has been built up in their stories over the course of the previous two movies.

This is Mr. Glass’ story, and the movie does that thing I really don’t like (and which you see in a lot of student films) in which one character is always the smartest guy in the room.  You think he’s lost, but in the end it turns out he won, was right all along.  It’s a series of intended magic tricks, and in between those tricks there is so little humanity or empathy.  These are just… hollow characters.

And that would be fine, but the movie isn’t that much fun, at least near the end.  There is some fun to be had early on when the characters first show up, as if walking out onstage as part of an encore to play their biggest hits.  The movie expects you’ve seen the prequels, and the beginning rides those coattails, just reminding you how much you may have enjoyed these performances the first go around.

But once the plot really gets going, it grows stagnant.  The humor goes away, characters’ motivations become increasingly flimsy, and it all builds to a fake out and a reveal of a secret organization that we didn’t know about until five minutes earlier… it’s a struggle.  Three people on either side of me in the movie theater walked out by this point.

So I really didn’t like Glass.  I will say that there are individual moments in which the inspired footage and music stirs up some emotion, but that’s based purely on the technical components of the film, and it probably works better out of context.  These are nice little cinematic moments but which build nowhere, particularly as the conclusion draws near and forces us to find strength in the hope of three other characters who suddenly want something so badly but for which they haven’t expressed any yearning until that epilogue.