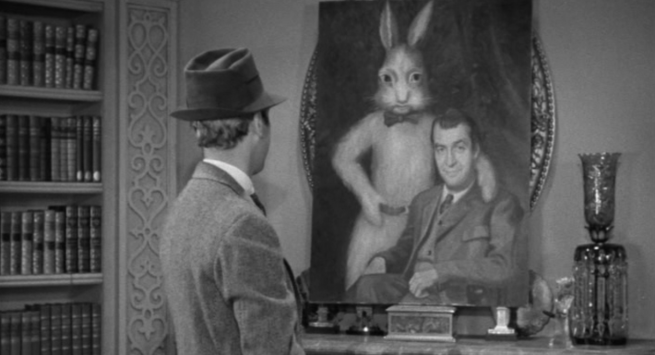 Jimmy Stewart is peak Jimmy Stewart in the surreal, calming, small-town Harvey.  He’s a pleasant fellow, Elwood P. Dowd, whose best friend is an invisible rabbit named Harvey.  Together they stroll cheerfully through town where Elwood is eager to introduce anyone and everyone to his large friend, unaware of the absurdity and horror of his apparent condition.

His sister, Veta (Josephine Hull) is beyond alarmed at her brother’s condition.  She’s worried for Elwood, sure, but mostly she is embarrassed to be associated with him.  His delusion is well-worn by this point in time, so we only see Veta try and get Elwood institutionalized because his abnormal ways threaten any good graces she has in the local community social hierarchy.

The reasons people seek to help Elwood are thus presented as self-serving.  The film itself argues that if he’s not bothering anyone, then what’s the harm?  Jimmy Stewart being Jimmy Stewart, you can probably picture his serene, gentle kindness and the gratitude through which he goes about his day.  In many of his films, at least the non-Hitchcock ones, Stewart seems to play the amiable fellow.  He’s awestruck by the simplest things, and he’s predisposed to courtesy.

In Harvey he is partial to a good drink or two, spending much of the day at the local dive bar where the bartender indulges his invisible rabbit friend.  There, and really anywhere, Elwood makes sure to extend invites to strangers to dinner, and you can be assured he will offer them his personal card if he hasn’t already.

So Elwood is out to turn strangers into friends, only because it seems like the right thing to do.  His sincerity arises suspicion among many and charms others.  As the story carries on we will be made to see the world he does.  Though we never actually see Harvey the tall rabbit, where we first see Elwood and Harvey from the outside (the spectacle of a man taking to thin air), by the end we are given reason to believe that Harvey is indeed real.

This is a film with modest ambitions, traced most clearly in a scene in which Elwood casually explains how he go to know Harvey to a few people who ask.  He has no interest in concealing his friendly rabbit because to him there is nothing odd about it, and as he explains in that wonderful moment…

“Harvey and I sit in the bars… have a drink or two… play the juke box. And soon the faces of all the other people they turn toward mine and they smile. And they’re saying, “We don’t know your name, mister, but you’re a very nice fella.” Harvey and I warm ourselves in all these golden moments. We’ve entered as strangers – soon we have friends. And they come over… and they sit with us… and they drink with us… and they talk to us. They tell about the big terrible things they’ve done and the big wonderful things they’ll do. Their hopes, and their regrets, and their loves, and their hates. All very large, because nobody ever brings anything small into a bar. And then I introduce them to Harvey… and he’s bigger and grander than anything they offer me. And when they leave, they leave impressed. The same people seldom come back; but that’s envy, my dear. There’s a little bit of envy in the best of us.”

The whole film is structured around this calming monologue, and it contains just a few of the quotes which struck me upon hearing them.  Elwood may be delusional, but this delusion only inspires in him a zen serenity, something worth pushing for.  It’s a complex that other films would interrogate and rip apart, but Harvey is content just to observe and appreciate it.  If there’s an accompanying darkness to this delusion, which there may indeed be, this isn’t the film to tackle it.