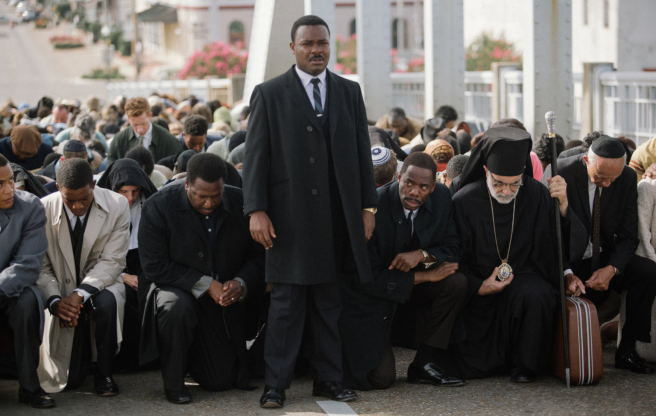 I often have a hard time breaking down a film like Selma, parsing apart the importance of the film’s message with the way it’s handled and the ways it attempts to engage the audience.  Some films lead with a heavy hand, announcing their importance before we meet the characters involved, but others, like Selma, treat a mythologized figure like Martin Luther King Jr. as a real person.  So let’s start there.

David Oyelowo does an amazing job here.  He channels King’s memorable voice in front of a large crowd, but he also shines in the smaller, quieter moments, whether it’s with his wife Coretta (Carmen Ejogo) or the grandfather of a young man who died standing up for the cause King championed.

King’s story here is narrowed in scope to his efforts to obtain equal voting rights in 1965. To do that he led a series of marches from Selma to Montgomery, Alabama, ruffling the feathers of President Lyndon Johnson (Tom Wilkinson) and Alabama Governor George Wallace (Tim Roth).

Instead of giving us a biopic on King’s life, which often reduces the impact of such a character by hitting all the expected story beats, Selma feels more engaged with real life struggles, racism and evolution.  We are made to see the ways change happens, not all at once but slowly over time.  The succession of marches, some more successful than others, forces us to become acquainted with the politics of this struggle, to see how King and other leaders go about their cause, knowing what points they want to make and figuring out how to make them.

From today’s vantage point what King and others were standing up for feels so obvious, the rights they wanted were so inherent and deserved that it’s easy to forget what went into forcing that kind of change.  By honing in on the specifics of this campaign we start to see it as no different than any political struggle today, one that is weighed down by the nature of politics more than the underlying morality of what’s being pushed for or against.

And that’s the main point of the film, to realize or remember what was sacrificed.  The brutality of the police towards the protestors, as well as the disregard by the lawmakers on top, is at the forefront of the film, and while you might say that the violence could go further into showing what really happened (if only because of the desensitizing effect other movies have on how we receive such imagery), it’s nonetheless stomach churning to see.

The first gut punch involves the 1963 bombing of a Birmingham church that killed four young girls.  The swiftness with which this is presented is devastating, particularly for a film like this (in which you expect every momentous story beat to be accompanied by some kind of musical cue).  Then through the marches we’re right there amongst the crowds watching the police brutality unfold (creating a de facto war zone), and then the final gut punch is when the film has ended, seemingly on a high note.  The onscreen text explains what happened to the important figures in the story, and for one person, cheering on King’s speech, we’re told that she and a car full of other protestors were murdered by the Klu Klux Klan only six hours later.  The final message, as you might’ve guessed, reminds us that King himself was gunned down only three years later.

So Selma honors the sacrifice that went into instigating permanent change in the ways the law views the people it governs.  These are rights, acts and laws that seem so clear to us now, and probably did to many then, but which involved a great deal of blood, sweat and tears to put in writing.