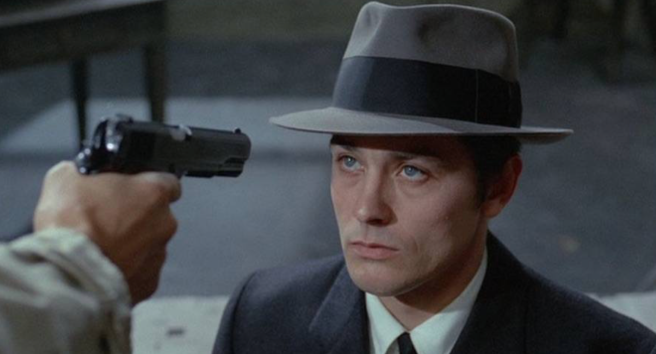 Le Samourai, like its main character, a contract killer named Jef Costello (Alain Delon), is precise.  We watch Costello over the course of a few days as he carries out a hit in stoic, rehearsed fashion and then evades both the law and the mysterious people who hired him.

This is a French gangster film, playing around with images, style and tone we’ve seen before.  The underground nightclubs, contract killers, and even Costello’s hat resembles that of Michel in Jean-Luc Godard’s Breathless.  The world and story of Le Samourai is already well-known, but it’s Costello’s process and attention to detail that separates this from other gangster films.

Ten minutes go by before we hear anyone utter a line of dialogue.  That silence becomes an effective tool for Melville throughout the film, something that lingers and simmers in moments of both artful observation and sensationalized tension during the film’s climax.  As we watch Costello carefully steal a car, exchange the plates, purchase a gun and then prepare an alibi for that night, we’re not just watching plot unfold but rather the process with which Costello carries out something that in other films may take place in a matter of minutes.

All of this attention to detail pays off later when we see him go to a nightclub to kill the man he’s been paid to kill.  It’s a stunning sequence because the sudden gunshots, with smoke filling the room like the celluloid itself has caught fire, contrast with the patience that has brought us here.

Every shot leading up to this moment is given careful attention because it will be so important after the fact.  When Costello hurries by the coat check desk we see the woman regard him, just as we see the pianist look at him as he heads toward this target’s office.  To anyone else in the nightclub he would be just another customer, and these brief glances shouldn’t amount to much worth dramatizing.  And yet they’re quite dramatic.

It’s also that no one really expresses emotion in this film, especially Costello.  He has the same stoicism as a character in a Robert Bresson film.  Those characters were mannequins purposefully devoid of emotion, just vessels which would move and communicate with the blankest of expressions and intonation.  The significance of a moment relied on that inhumane quality and, because of various juxtapositions and natural human instinct, the audience would project themselves onto that blank slate of a main character.

It is perhaps a distancing effect here, allowing us to pay attention to the process and puzzle-like quality of Costello’s journey and the police investigation into his crime.  Because we never knew the victim and because no one dares show emotion, we forget about the underlying heartlessness of what Costello has done and hone in on the details of how he does it.

The investigation takes up much of the middle portion of the film.  After the murder the police put a call out to pick up basically anyone who might fit the killer’s description.  In this mass wrangling they will gather Costello and run him up onstage alongside others as if this is a casting call for a Lifetime movie.

Though some of the nightclub witnesses say this is the man, he has two alibis which work in his favor, and the nightclub pianist insists that this is not the man, even though the attention given to her gaze both now and in the nightclub suggests she knows he’s their man.

Though released due to lack of evidence, the lead investigator remains sure that Costello is the killer, and he sends a team of detectives to bug his apartment and later tail him as he scurries away on the Metro.  At the same time Costello will visit a messenger from the man who hired him to receive his payment, but thanks to the police attention given to him, the man says that he can’t be trusted, and he is shot and nearly killed.  Costello returns home, quickly identifies and removes the police bug, then sets about finding the man who hired him and ordered his murder.

He boldly strides into the nightclub despite the obvious heat it would place on him as a suspect in the previous night’s killing.  He finds the pianist, acknowledges that she let him go on purpose and wants to know why.  She is in some ways a guardian angel, saving him from arrest, but her motives are murky, not as clear as Jane (Nathalie Delon), Costello’s lover who willingly submits herself to be his alibi, even though she risks the police learning she lied, and seemingly reveals to her husband that she’s having an affair with Costello.  Even though it is a bit self-destructive, her protection of Costello is selfless.

For the pianist it’s a mystery which will only be answered in the closing moments of the film.  That same mystery, you can be assured, connects to the mystery surrounding who Costello needs to track down to enact revenge for the hit put out on him.

The second half of the film will pay off much that was established in the first half.  Costello evades police and hunts down the men who want him dead, finding out some information from the messenger sent before who now explains that they realize he’s not a threat and thus want to pay him for another hit.  He accosts the man and demands to know who hired him.  When the man spills the beans, Costello chastises him, saying that’s how you lose work in this business.

Le Samourai is a wonderfully simple film, at least at first, that slowly evolves in surprising ways before reaching a climax that maintains a certain mystery until the final minutes play out.  It’s so simple and straightforward that you don’t anticipate the ways in which the plot folds in on itself and characters who seem to have only recently been established suddenly reveal unexpected depth and deceit, much like in many noir films.

This movie is said to be highly influential on a number of modern filmmakers, and you see that effect clearly in movies like Jim Jarmusch’s Ghost Dog: The Way of the Samurai (1999) and in villain Anton Chigurh in the Coen Brothers’ No Country For Old Men (2007). These are silent, almost emotionless characters who follow strict codes for reasons that aren’t always clear.