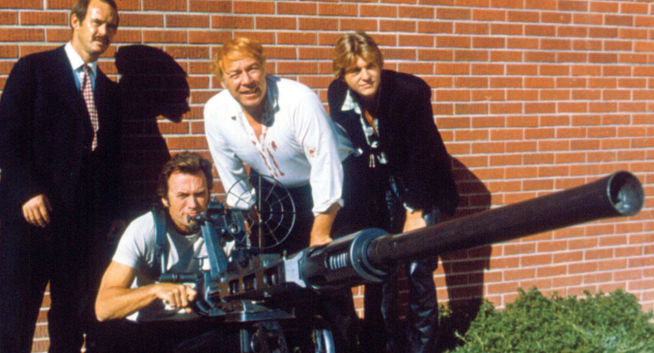 At first glance Clint Eastwood and Jeff Bridges seem like an odd pair, almost as if they were shooting two entirely different movies and one day just stumbled onto the same set.  Here they play a bank robber and a, well I guess a petty car thief.  Part of the unexpected beauty of Thunderbolt and Lightfoot is that they don’t really have any backstory.  Sure, Thunderbolt (Eastwood) and Lightfoot (Bridges) refer to events in their past (women, heists, etc.) but that only ever feels like thin set dressing, mandated exposition to make us relate to their characters.  I think they work because they’re such blank slates.  The less we know about them, both their background and motivation, the more they become some vessels through which we can assign our own values and hopes.

They are like Tom Sawyer and Huckleberry Finn, making their way innocently enough through somewhere in middle America, following their most recent whim and chasing dreams as old as, it seems, America itself.

They meet by chance in one of those spectacular “meet cutes” that happen only in movies.  Lightfoot decides to steal a car, possibly just because he knows he can, and he runs into Thunderbolt, working as a priest until an old ‘friend’ shows up with an automatic weapon and tries to kill him.  That friend is Red (George Kennedy), who acts as the Wile E. Coyote to Thunderbolt’s Road Runner.

Along with a fourth character, Eddie (Geoffrey Lewis), they will hatch a plan to rob a bank in Montana.  It’s the same bank Thunderbolt and Red once robbed long ago, though they never took home the loot.  Instead they hid it behind a chalkboard in an old school house which has since been replaced by a more modern building.

What’s quite delightful about the heist is how patiently it unfolds.  The four men form a strange little family as they live together in a small trailer, each doing odd jobs so they can save up a little money and plan the robbery.  This section of the film may feel scattered and aimless, but so much of the story up until this point felt similarly so.  The film, I reason, wouldn’t work for this reason unless the characters were a joy to simply observe.

They are engaging, mostly thanks to Jeff Bridges’ performance.  Red and Eddie are adequate side characters, but they could exist in any number of other movies.  Then there’s Eastwood doing his usual stoic Eastwood thing.  It’s not a bad character but one that feels tired (literally, he always seems sleepy) and grumpy.  So many Eastwood characters are like this that you get the sense he really is/was this dour in real life.

Bridges brings life to the film as a character straight out of something like Point Break, all “young, dumb and full of cum.”  He’s a man child, eager for a good time and always taking everything in stride, even as he’s sometimes unsure where his next meal will come from.  Because he’s just another aimless drifter you can picture that he came from a tough upbringing, from a home that must’ve dissolved long ago.  He’s charismatic enough to fit in anywhere, but his isolation at the start of the film, as well as his puppy-like affection for Thunderbolt, paint a picture of someone cast away and abused.  You just want to take care of him.

The dynamic between Thunderbolt and Lightfoot is similar to that of the Brendan Gleeson and Colin Farrell characters in In Bruges (2008).  They develop a kind of father-son bond, and much of the audience’s affection for the younger character is because he is ostensibly still a child.  He means well but often doesn’t know any better.

If you don’t latch onto these characters you may not have the patience to wait until the climactic heist.  I felt that it sometimes wore out its welcome, particularly in moments when I didn’t think the characters’ banter was as cute and witty as it was meant to be.  Their first direct encounter with Red and Eddie, who up until that point were trying to kill Thunderbolt, feels contrived, particularly as the altercation quickly placates and they team up.  It feels like one of those empty scenes you get a lot in a tv show that wants you to think there are dramatic stakes when they really just need to maintain a certain stasis between the characters so as to stretch the show out a few more seasons.  Once they’re together, however, things become a little more fun, and the heist portion of the film is as effective as any other action set piece.

The film ends on a poetic note, with Thunderbolt and Lightfoot staggering away from the chaos of a heist that doesn’t go according to plan.  They march through Montana grass fields and then miraculously approach the old schoolhouse at which Thunderbolt had stashed the loot from the original robbery.  It’s as if from a fairytale and thus could be read as the delirious fantasy of at least one of the two men, something he desperately needs to believe.

That’s because Lightfoot, somewhere in their journey, seems to crack.  He remains as easy going as ever, but through that facade you can better glimpse the yearning within him.  Whereas before you only saw everything he had (his charms, good looks, attitude), now you can more clearly see what he’s still searching for.  It’s his character arc which gives the film an unexpected tenderness.