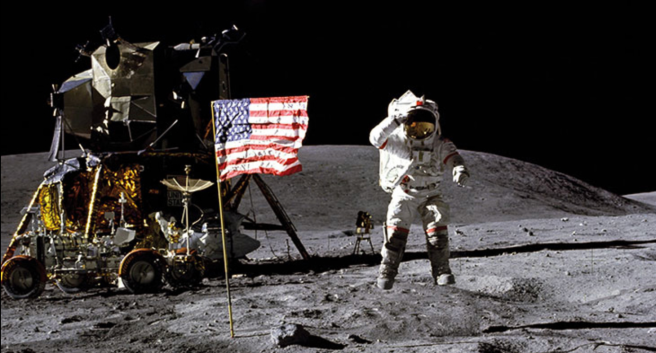 For All Mankind is a different kind of space movie.  It’s as awe-inspiring as movies like Apollo 13 (of which Al Reinert was a co-writer) and the recent documentary Apollo 11, but where so much of those movies were instilled with the inherent drama of traveling through the vacuum of space, this one is kind of… whimsical.

It’s a delight, really, assembling footage of an average Apollo mission by using footage from a dozen or so such missions.  We will see the famous first steps taken by Neil Armstrong on the moon, but we will also hear Charles Conrad of Apollo 12 reference Armstrong when he becomes the third man to walk on the moon, saying “Whoopie! Man, that may have been a small one for Neil, but that’s a long one for me.”

On the way to the moon we see and listen to mostly footage of astronauts enjoying themselves, acknowledging how hard it was to focus sometimes because of the pure joy of being in space, but we will also see the sudden chaos following a small explosion that derailed the Apollo 13 mission.

The goal of the film is to give an overarching perspective of the Apollo missions and all the work and people who went into getting us to the moon.  It’s not about one mission or one person, and because we jump through footage of so many missions we’re not always even sure who we’re looking at in any single moment.

We see footage I sure as hell had never seen before, including some of astronauts in the final Apollo missions bouncing around the moon like children learning to walk for the first time.  There is a quick montage of them falling and tripping, caught up in the glee of the moment, and it adds a very endearing sense of fun to something which is otherwise presented, understandably, in a very, very serious manner.  Space is exciting and dramatic, and oftentimes such movies neglect to mention that it seems it can also be a hell of a lot of fun too.

Along with the footage here we listen to interviews from astronauts spread across the various Apollo missions.  They tell us not so much about the nerves which they surely felt but rather the awesome feeling of looking down upon the Earth and of floating around the spacecraft.  Years removed from going to the moon they are able to reflect on the experience, and their accounts of their mission are often rather poignant, as if they got into this for the science but came out the other side as poets.

They discuss how fleeting life and individual moments are, wanting to soak in everything they saw knowing that soon it would pass and be replaced by new memories. They speak of looking down upon the Earth and seeing not individual nations but one singular world.  They similarly speak of the moon, with a degree of fondness, particularly after they leave to come home, seeing from afar their footprints and rover tracks and feeling a sense of connection to the otherwise untouched planet.

So For All Mankind is just a beautiful film about why ‘we’ travel to space and beyond.