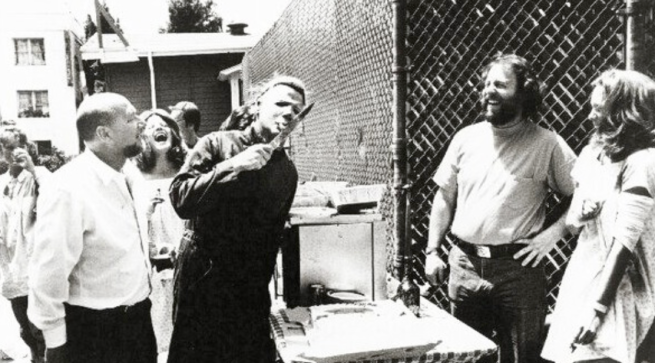 The term “serial killer” didn’t exist when Halloween first came out.  So yeah, there had never really been anything quite like Michael Myers before he showed up.  There had been ghosts and ghouls, zombies and aliens, even the perhaps slightly more human antagonists of the occult (Rosemary’s Baby, The Exorcist) but there had never been anything as straightforward and horrifying as the masked killer Michael Myers.

He wears a mask of Star Trek’s James T. Kirk that, when stretched over Myers’ face, is grotesque and placid.  He’s pure evil incarnate, as his tortured psychiatrist insists, and there is nothing human within him.

The film opens with a long tracking shot through the Myers home on Halloween night 1963.  It’s a moment before we realize that the camera is a person’s point of view and that this person is about to commit a gruesome murder.  It takes a few more moments after that until we realize the killer is a six year-old boy.

The story then cuts forward to Halloween 1978.  The Myers home has remained unoccupied since that night, and it has become the stuff of urban legend within the small community of the fictional Haddonfield, Illinois.  It just so happens that this day marks Myers’ release from the hospital at which he was held.

The main character here is Laurie Strode (Jamie Lee Curtis), the prototype of the “final girl” that would dominate later slasher movies and be parodied in the likes of The Cabin in the Woods (2011).  She will visit the Myers house briefly to drop off the key to the home for the realtor, her father.  Harmless enough, Myers will be standing inside the whole time and for no apparent reason at all set his sights on the young woman.

He spends the rest of the movie stalking her, and what’s most surprising about Halloween, at least from today’s vantage point, is just how often we see him.  For much of the film, set during the day, he isn’t buried in shadows or teased with quick glimpses.  Instead he’s right out in the open, no less frightening in his inhumane mask.

For Laurie’s part, though she is understandably unnerved, she doesn’t seem all that phased by the man’s appearance, even as he follows her around town like a delayed shadow.

She won’t even realize there are murders taking place (that of her friends and classmates) until damn well near the end of the movie.  Halloween is an exercise in restraint, a slasher movie without much blood but with a whole lot of tension.

It’s simple and to the point, devoid of cheap jump scares and instead riding the benefit of a great score (composed by director John Carpenter) and a powerful enough image of a serial killer (that mask goes a long way).

This is a horror movie that brings the horror to your door step, seemingly at random.  It follows in the tradition low budget horror movies like Night of the Living Dead (1968), but even in that movie the horror which made its way to our own recognizable world was heightened, a zombie apocalypse.  There remained a divide between the world onscreen and the world in which we live.  In Halloween the gap is erased.

This of course would go on to be the template for slasher movies to follow, and Jamie Lee Curtis followed her first starring role with turns in movies like The Fog, Prom Night, Terror Train and Road Games (all horror movies) before returning for Halloween II.

She was only nineteen when production began, and part of the reason for her casting was that she’s the daughter of Janet Leigh, the lead actress in Alfred Hitchcock’s Psycho, playing a character at the hands of another famous cinematic serial killer.