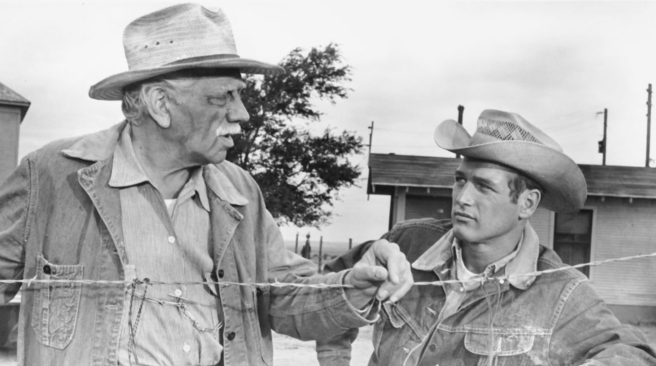 Hud is a black and white Neo-Western about generational differences, all embodied by a young man and his elderly father.  They are Hud (Paul Newman) and Homer Bannon (Melvyn Douglas), and their relationship is underscored by strife and the long-teased absence of Hud’s better-loved brother, whom we later learn died in a car accident that Hud survived without a scratch.  It’s an untimely death that has since soured their relationship, even though they are still in close proximity to each other, even working the same ranch.

Hud spends his days with another man’s wife and then undercutting his father when it comes to their business.  He figures the land is worth something to an oil man, but Homer wants to keep working it the way he always has.  This grows more difficult, however, when a few of his cattle contract the deadly foot-and-mouth disease which soon spreads to his entire herd.

It seems to bother Hud none, as he figures they could sell off some of the cattle before they must officially be quarantined, though Homer is having none of it.  He’s a law-abiding, thoughtful old man and his son is brash, selfish and probably going to succeed as a businessman down the line.

The dichotomy here is perhaps unfair.  It paints Homer, the old guard, as a man of virtue and by proxy his entire generation too.  Hud, then, is self-centered and eager to turn a profit.  Though their conflict seems like a microcosm for the state of affairs of America at this time or just of any generational shift, it does paint in fairly broad strokes.  Not every old man is as wise and considerate as Homer, just as not every young man is as cocksure and self-centered as Hud.

And yet in watching the film it’s hard not to consider those broad takeaways, what the conflict here means on a bigger scale.  The film’s title is Hud, of course, so in a way it finds in its central question an answer in this character.  He is not as much the main character as we first expect and instead the unsettling resolution to a problem inside which the real main character finds himself.

That character is Lonnie (Brandon De Wilde), Hud’s nephew and Homer’s grandson.  He’s young, innocent and impressionable, and we chart the story’s progress as he gravitates towards one side or another (Homer or Hud).  By the end he will make his decision, no matter how conscious or unconscious, while the other characters find themselves firmly in the next stage of life.

So I think Hud is grim but beautiful, though I can see how others might find it preachy, overly simplistic or simply future-phobic.  It’s a film loaded with nostalgia, though we might not feel it.  The black and white countryside, similar to the dying town of Peter Bogdanovich’s The Last Picture Show (also adapted from a Larry McMurtry novel), is aesthetically beautiful but in a morbid sense.  It’s barren and almost unsuitable for life.  Diseased cows die, waiting to be picked at by vultures, others are massacred in a pretty grim sequence, and poor ‘old Lonnie spends a lot of time just sitting by himself, listening to whatever’s playing on his pocket radio.

It’s purgatory basically, where time moves almost unbearably slowly, things die and the only saving grace is to find another way to leave.  It’s either death or breaking free from everything you know and just grabbing a ticket on the next Greyhound out of town.

Along with the Bannons there is a fourth central character here, their live in housekeeper, Alma (Patricia Neal).  She gets along fine with all the Bannon men, even as they don’t get along with each other, and both Hud and Lonnie harbor affections for her (highlighting their characters’ similarities) though go about them in different ways.

Thanks to Hud’s behavior she too will hitch a ride out of town, fed up and having already gone through one abusive husband and not looking for another.  She’s a hardened, wise soul who, based on the stories she tells, seems to have been through the ringer and found in the Bannon homestead a quiet, graceful way of living.  And then that soon falls through too, demonstrating how this place and these people aren’t the answer either.  They may feel bigger than life when the story begins, just in the ways characters projected onto thirty foot screens do, but they are deconstructed and spit out by the time the credits roll.

The film then somehow finds a way to make frightening both the past and the future.  The town is dying, it seems, just as is the nuclear family, and though there may once have been fruitful living, everything is so grim in the present that such a way of life would seem a lifetime away.  And yet the fast approaching capitalistic future is something to be weary of.  It is inevitable, much-like death, but not embraced save for the character we’ve seen do unspeakable things, a man wounded in his own right but never put in a position to receive the audience’s good will.  He suffers, acts out, then the film ends.

There really is a lot in common between this and The Last Picture Show.  You have the young protagonist trying to get by in a dying town, an older woman with whom he is infatuated who herself has escaped or simply lived through a brutal past, there’s the old wise man who will die by the end, and then there’s that young character’s inevitable, necessary escape by the end.

Such stories suggest that these tiny towns are ghost towns before the inhabitants even realize it.  They are not suitable for modern life, one more capitalistic and inter-connected.  For the old characters, well they go down with the ship, but the younger ones, just by virtue of said youth, have time to course correct and get the hell out of dodge.  To live, or really just to survive, they have to hit the interstate and find a city that can change with the times.  Though they must and do leave, their departure is never the optimistic one we might see in other coming of age films, rather it is more of a funeral march, their path the eulogy to the town they leave behind.