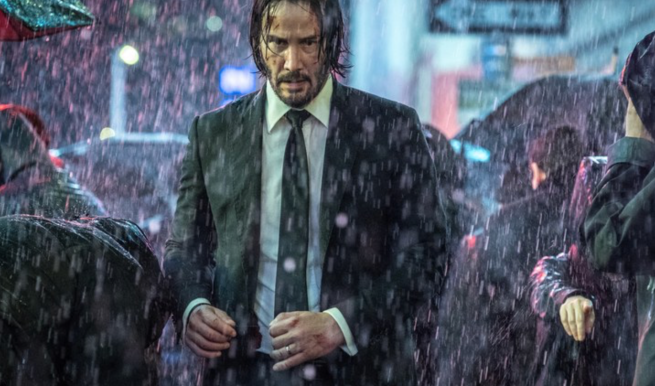 The third John Wick matches the energy of the first two, somewhat improbably, if only because the movie and its universe is already so unhinged.  And yet all that ever-expanding chaos is somehow grounded within a strange but strict set of rules.  It’s John Wick’s decision to break those rules at the end of the previous movie that kickstarts the action here, and though he will return to his semi law-abiding ways, the end of the movie promises even more anarchy in the next sequel.

So is it anarchy?  Is it tempered anarchy?  I don’t know, but several characters speak to the idea that these strange rules are the only thing that separates them from animals.  It’s this reverence to this underworld’s ways that maintains some amount of order, and the fact that this order is maintained even as hundreds of people are brutally killed, well it suggests that a John Wick world without order would be pure devastation.  It seems we might all just kill each other for the fun of it.

The movie takes place mostly in New York City at night, showcasing the pulsating, alluring quality of the cultural capital of America, like the light that attracts a moth.  It’s some kind of Mecca, and while it’s filled with beauty and a certain mystery, it’s really just the playground for assassins (though the assumption is that they exist in every part of the world too).

The aesthetics resemble the slick environments of music videos, car commercials and other advertisements.  They are bright, colorful and stimulating, all trying to sell us something or at least convey a certain message or attitude.  It’s a form of control, particularly if you view this through the lens of something like John Carpenter’s They Live, and it seems there’s a message here about how all these distractions help disguise the cold-blooded murder that often occurs in public.

I took it to be a commentary on capitalism as a whole, the cutthroat nature of it, of succeeding in a system that by nature requires someone else to lose.  When the movie opens Wick has his back against the wall, with a $14 million bounty on his head.  We’re led to believe that everyone in the city has him in their sights, and after a few thrilling, imaginative (and even funny) combat sequences, he reaches one of these all powerful, mostly invisible characters who gives him one way out: he must assassinate one of his only visible allies, Winston (Ian McShane).  To succeed he must kill someone else, and though his reasons for living are honorable (to carry on the memory of his deceased wife), how far will he go?

Sure we’ve seen Wick murder waves of people, but they are for the most part faceless, personality-less men trying to kill him too.  With Winston there are suddenly consequences, and we haven’t seen Wick kill such a developed character before.  He maintains his innocence despite his proclivity for violence, and that’s quite something.

That’s really quite something the more I think about it.  These victims and future victims of John Wick die because they want to kill John Wick, but they’re never ‘bad guys’ in the conventional sense.  They are merely doing what any rational person in this universe would.  They see a bounty, and they want to get it.  Even Wick understands this relationship and never faults them for it, just as they don’t fault him for trying to kill them.

The first movie was about revenge, but murder in Parabellum is strictly business.  Characters even go so far as to tell John Wick how much of a fan they are, playing into his character’s (and actor’s) celebrity.  He is their idol, and yet they’re eagerly, excitedly trying to rip his throat out.

And so this has to be about capitalism right?  Wick plays the game because he’s too far in to get out, but when we first met him he was reluctant to return to this criminal underworld.  Now that he’s in, thanks to Theon Greyjoy killing his dog, he’s forced to play once again by the rules.

It also helps that he’s the best killer there is, a man so skilled in the art of murder who nevertheless comes across as the most pure, innocent of all characters in this world.  We’re never not on John Wick’s side, and no matter how gruesome and disturbing the deaths become (he slowly stabs someone through the eye, for example) the movie never risks alienating us from his perspective.

So I take this as he’s a wonderful little entrepreneur, playing the same cutthroat game as everyone else, knowing that to win others must lose.  Another reason for this take on the movie is all the different levels of technology we see throughout.  Characters use typewriters, chalk boards, 80’s era computers, modern day Apple computers, flip phones and even carrier pigeons.  Beyond adding texture to the slowly unfolding John Wick universe this calls attention to these technological developments over time.

We are forced to consider how things have changed and in how short an amount of time.  It’s as if to show us how far we’ve come, how high we’ve climbed… and yet it all just leads to this insane massacre.  We’ve reached the pinnacle of civilization and it consists of a bunch of dudes murdering each other.  We’re led to believe that everyone is an assassin in hiding, and if they’re not then they are at least apathetic to the bloodshed around them.  To kill and be killed in this universe is perfectly normal.  It’s not that we’re a bunch of savages (because again, the “rules”) but that we’ve all willfully bought into this game of life and death.

Or maybe everything just looks the way it does because it makes the movie more interesting than if it looked like everything else we’d ever seen.  Maybe it’s just empty fun, or maybe it’s not.  Either way it is a lot of fun, and the fact that John Wick offers more than just surface level thrills is itself kind of thrilling.