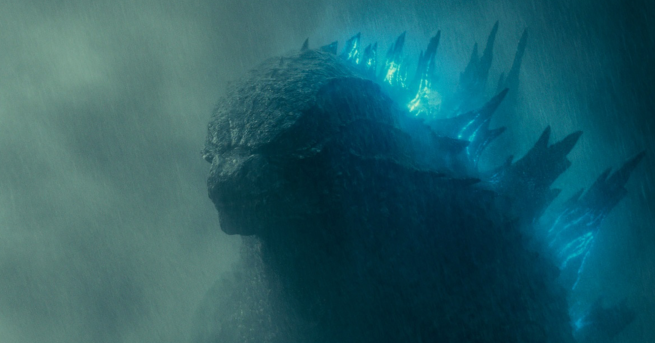 Godzilla: King of the Monsters just feels flat.  It’s loud, somewhat obnoxious, there’s some interesting-looking creatures onscreen, but all I could think about was the disappointing eighth season of Game of Thrones.  That’s more or less what this movie is.  There’s plenty of action, but the story struggles to ground the conflict in anything real.  Even as entire cities are leveled and the central (but bland) family is separated it felt like the stakes were inconsequential.  This is a movie about monsters fighting other monsters, and though there’s a moment in which Kyle Chandler declares that the humans are joining the fight, they really have nothing to do here.  It’s similar to the previous Godzilla film, though I’d argue that that time around the characters had much more agency, even if it required a huge suspension of belief that they would ever be so consistently near the action.

This just feels like every other disappointing sequel.  Like with The Lost World: Jurassic Park, for example, the only holdovers from the first movie are the ones more or less tangential to the action.  They are character actors to the side of the A plot who are now shoved into positions to carry more of the plot’s burden.  That would be Ken Watanabe and Sally Hawkins, for the most part, and they join a new set of ‘heroes,’ a broken family on opposite sides of a contrived conflict.

I’m really struggling with where to begin.  This is such chaos, the plot, the characters, everything.  First off, Godzilla just keeps showing up out of nowhere to save the lives of all the highest paid actors in the movie, like a lot.  It keeps happening.  They’re in trouble, there’s no way out, and then boom, the “king” shows up to save them, almost as if he is their personal bodyguard.

I get that Godzilla and the humans are on the same side, that’s fine, but it’s more of a deus ex machina within a given sequence than something more mighty or symbolic.  He’s there to protect humanity from other monsters, specifically a three-headed dragon monster that is apparently from another world, an invasive species.

That this antagonistic creature is some kind of alien is a bit of a cop out.  Before then the characters reckon that Godzilla and these other monsters are here to protect Earth from it’s most noteworthy virus, humans.  It’s the type of message that is so routinely shoehorned into movies like this (Tomorrowland too, for example).  We get it, humans are bad, we pollute the earth and fight wars, but that’s not exactly an original idea.  Rather than feeling like a damning commentary on us as a species it is instead borrowed without meaning.  That’s because it turns out not to be true?  In the end there’s a bigger villain, and this wipes under the rug the idea that humans are the ones who need to be controlled or even wiped out.

It’s brought up in a clunky monologue on the part of Vera Farmiga’s character, on some sort of Skype call with the “good guys.”  To make the moment almost hilariously uneven, we cut to a video montage of all the things she’s describing, the pollution, the wars, etc.  Who the hell edited this video?  We see that it’s the same video everyone else is seeing, and it makes absolutely no sense.  Is there some ecoterrorist intern named Glen just burning the midnight oil to make sure this powerpoint presentation is ready in time for Farmiga’s sinister monologue?

It’s a half-assed, clueless presentation of a damning idea.  It’s like a child cursing you out without knowing the meaning of any of the words he or she has just said.  It’s just a mess.

You might say that of course these things are clunky, this is a movie about monsters fighting, not the people involved, but then why do those people get so much screen time?  There is so much talent up there cashing in these checks, but they have nothing to do, and it would seem to be a better use of money to just get rid of them.

But that’s not an option, is it.  So what should they do?  Gosh this movie felt like homework to get through.  I tried keeping a running tally of all the tropes and cliches stuffed into the plot, but I couldn’t keep up.  There are things like divorced parents, an underdeveloped deceased child backstory, characters inexplicably hearing important, secret conversations that are somehow being recorded and broadcast, there’s the whole “Godzilla is dead” thing and then the “no wait he’s alive.”  There are characters making vaguely racist, certainly reductive comments about each other.  There is very little sense of geography and time, as character travel all over the globe in however long the plot necessitates it take them, there are terrorists who kidnap Farmiga’s character only to later on reveal that she’s working with them (which, if true, then why did they kidnap her?), there are characters who celebrate the creatures and those who just want them dead (brining to mind Paul Verhoeven’s Starship Troopers), and then there are all the humans who are the real villains of the story for unleashing the monsters (something something humans are greedy).

Man I really didn’t like this movie, did I?  Maybe that’s on me, maybe I really was too enamored with that first trailer released almost a year ago with the Claire de Lune music, I still think it’s one of my favorite movie trailers of all time.

Those two and a half minutes have a grace this movie just plows right over.  Everything is in service of the plot, and moments of humor or character building are shoved in with no thoughtfulness.  Everything is an algorithm, aimed to make you feel a certain way at a certain time.  It’s heavy-handed and cold.

And I like to think a movie like this can work, whether by successfully raising the stakes or by embracing a certain campy quality like that of Thor: Ragnarok.  There’s a way to make these stories matter, but by shoving in new central characters and picking a new CGI city to destroy, that probably isn’t it.  It’d surely help if we had some kind of pre-existing attachment to the characters involved, but even those from the previous Godzilla weren’t all that exciting after Bryan Cranston’s character died.

So I don’t know.  It would be fine if the action and spectacle worked, and maybe it did, I just felt it was all kind of uninteresting to even look at.  That’s a bummer, maybe I’m a bummer.  I happened to see this the same day as Olivia Wilde’s Booksmart, and that’s a pretty great movie.  Much different, working on different levels, but sh*t that was a fun ride, more dramatic and certainly more entertaining, even as it works on a much smaller (but more human) level.