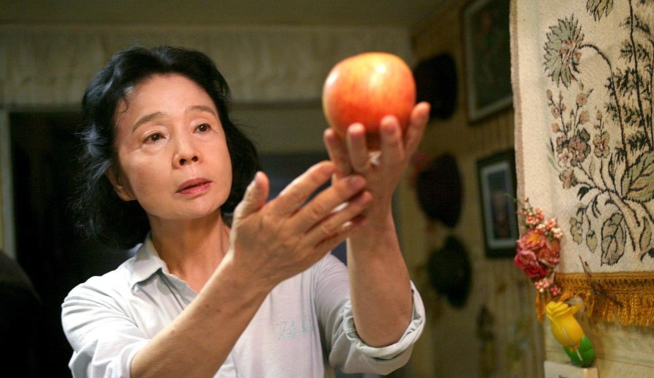 While I don’t as of yet have a firm grasp on what happens at the end of this movie, I’m nevertheless compelled to think of this as one of the best I’ve ever seen.  That’s ridiculous, right?  It’s kind of ridiculous, but it’s riveting, tragic, at times amusing and eventually deeply moving.  I’m just not completely sure why, yet.

It’s the story of a woman, Mija, picking up the pieces following a fatal incident in which her grandson, Jongwook, had a hand.  The parents of the other boys want nothing more than to make the problem go away, speaking of it with the same tone you’d expect from parents disappointed over a child’s poor report card.  Though Mija conforms to their plan of action, she does so with quiet desperation, never seeming to accept the reality of the situation.

In one darkly funny scene they tell her the plan, to pay off the parent of another child, and Mija says nothing as she leaves the table and goes to look at the flowerbed just outside the window.  The other fathers then try to figure out what she’s up to but give it little thought.  To them she is not worth knowing, and all they want is her share of the money.

Mija stares at the flowers because of inspiration from a poetry class in which she has recently enrolled.  It’s the only opportunity she has to be proactive within the movie.  Not only is she dealing with the fallout of her son’s heinous behavior, but so too is she diagnosed with Alzheimer’s.  Whether this awareness of her fleeting memory compels her to pursue poetry, as a means of paying attention to the things that will soon escape her, who knows.  The diagnosis is mostly background to the main thrust of the story, and if anything it seems she simply ignores what the doctor has said.  It’s a degree of denial she doesn’t have the luxury of in regards to Jongwook’s situation.

It’s also a way of showing how she puts her own needs behind those of her grandson, whom she has raised for quite sometime.  He’s a moody teenager who’s moodiness carries new meaning after we learn what he’s done.  He hardly speaks and instead either sleeps, eats or hangs out with his friends.  Mija rarely ever confronts him, not just about any criminal activity but even just the little things like cleaning up after himself or saying ‘please’ and ‘thank you.’  Instead we see her channel her dread and fear into her poetry, or at least the attempt to write poetry, while it builds up, like a snake soon to strike, inside.

She doesn’t think herself capable of writing a poem, and neither do the adults in her poetry class.  To them poetry isn’t something anyone can do (some better than others), but rather the equivalent of speaking a yet to be created language or learning to fly.  By the end, you might’ve guessed, Mija figures out how to say what she wants to say.  It’s the well-earned culmination of the entire film, her point of view on the tragedy to which she has spent so much of the story reacting.  It’s a beautiful poem which blends together the voice of Mija and a character from beyond the grave.

The story is sparse, giving each character beat plenty of room to breathe.  There are some riveting moments in here in which nothing of plot importance happens.  They are almost always silent, relying on Mija’s eyes to make the moment work.  Through those eyes we understand the depths of her commitment to her grandson, to justice, and to her aim to find beauty in the world, despite living through surely the most horrific few weeks of her life.