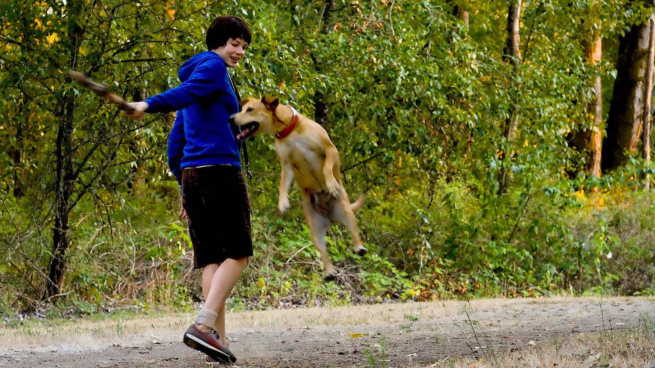 Watching someone get caught shoplifting gives me so much anxiety.  I don’t mean in real life but in movies.  There’s always some mix of justice with ego and self-righteousness.  We understand why, for example, Wendy (Michelle Williams) tries to steal an apple and a can of dog food, but the person who catches her doesn’t.  He’s right to accost her, of course, but then he also expresses a smugness that could wilt a field of sunflowers.  He’s smug and right, and I feel like sh*t.

I guess such a moment shines a light on how people so often pass each other by without realizing what’s going on in the other’s life, and how we act on certain impulses and ideas without room for empathy.  Kelly Reichardt’s film is all about empathy.  For Wendy, a vagabond low on money and without transportation, she ultimately survives thanks to the kindness of a stranger or two.

For so much of the film, however, she’s drowning or close to it.  She’s just passing through a small Oregon town, on her way from Indiana to Alaska, where she heard there might be some work.  She has a dog, Lucy, and an old car, and one morning it won’t start.  It’s when she tries to steal food for her dog that she is caught by a very law-abiding grocery store employee who must implore his surely more thoughtful boss to call the police, considering they have a zero tolerance policy.  Wendy is then arrested, and after a few hours behind bars she returns to the grocery store to find her dog missing.

There’s nothing outright malicious about the environment of this film, and in fact my lasting image is of Wendy and a helpful security guard (Walter Dalton), who acts as her only friend.  Their shared kindness is incredibly heartwarming, especially as it’s juxtaposed against a coldly uncaring world.  Again none of it is outright malicious, but it’s because no one cares about Wendy that it all feels so cold.

The world isn’t there to solve her problems, just like they’re not here to solve ours.  Instead she must fight for every inch, albeit with a little help from the friendly security guard.  And the film quietly draws a portrait of simple kindness, of helping out because you can.