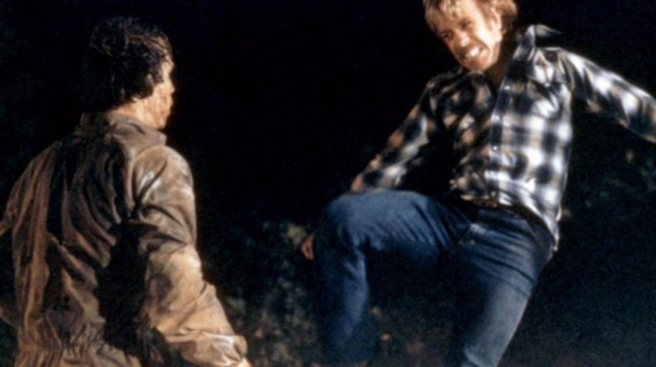 Yeah so Silent Rage is seriously indebted to John Carpenter’s Halloween (1978).  In some ways it feels like a straight ripoff, complete with the unkillable psychopath, the obsessive but morally compromised therapist who tracks him and first person voyeuristic perspective.

But then you add in Chuck Norris to all of that.  After a poorly conceived plan of attack that pits him against the psychopath early in the film, Norris, as Sheriff Dan Stevens, spends much of the film apart from the movie’s undead villain.  They are from entirely different stories, and when they do cross paths it feels more like the overlap of characters in Abbott and Costello Meet Frankenstein (1948).

So Silent Rage is two movies.  In one we see the death and resurrection of a Frankenstein’s monster, a disturbed man who opens the film by killing two people in cold blood.  A pair of scientists try out a new serum on him which might unlock the clue to new advancements in self-healing, but instead they have simply created an indestructible madman.

That madman, John Kirby, plows right through every named character in the cast outside of Stevens and his love interest, Alison (Toni Kalem), so that he can then pursue them in the film’s climactic skirmish.  After seeing the undead man stabbed, sliced, shot and injected, he will for some reason resort to hand to hand combat with Stevens, as if such combat is a code of law amongst 80s action stars, like in Road House (1989).

It’s a strange sequence that works as an odd piece of evidence that 80s movies sure did exist, but it’s so out of left field and halts any forward momentum on the rampage of the Michael Myers-esque creature.  He stalks and kills his prey with no sympathy or even anything resembling human emotion and thought, but then just because the film must show off Norris’ athleticism he decides to play along.  It’s quite something.

There’s an earlier scene too that’s easy to forget about.  In it Norris just fights his way through a crowd of hooligans in a dive bar in which the bartender is literally strung up in a noose.  It’s similarly a scene straight out of Road House, and holy sh*t is this movie wild.

It’s a scene involving Norris that, again, has no real connection to the John Kirby storyline, at least unless I missed something.  Norris’ character just shows what he stands for and then proves that he has more testosterone than the others.

There’s also that romantic subplot with his old flame Alison, and it goes nowhere except to represent what he has to lose to this undead villain.  It’s schmaltzy and hilarious, and y’know what, it’s fine.  It’s all fine.

It’s a weird crossover movie, a recipe of things that don’t quite fit together, and yet it’s pretty fun.  Norris never really engages with the more horrific part of the film until the end, but by then it’s not so much Norris jumping into a horror movie as much as the Frankenstein’s monster jumping into a Chuck Norris movie.