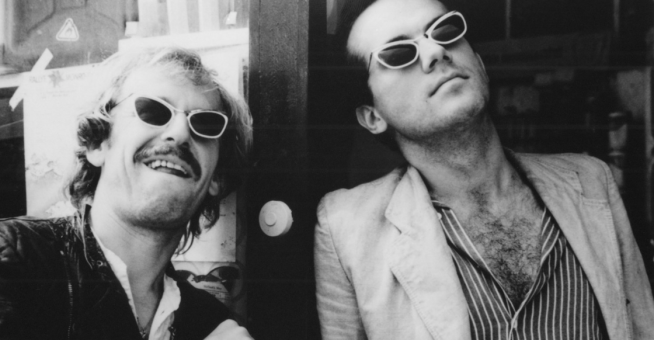 Kings of the Road is a hangout movie, following a hermit projectionist, Bruno, and a recently divorced man named Robert.  They meet when Robert interrupts Bruno’s idyllic morning routine by trying to kill himself, though perhaps as a way of shying away from the darkness of a suicide attempt, his effort involves driving his car quickly down a gentle slope into a lake.  He car doesn’t crash so much as slowly stop moving, he waits a moment to consider his predicament, then he calmly tosses out his suitcase and swims to shore.

From there they develop a bit of a friendship though tenuously at first.  Bruno allows Robert to ride with him, mostly just to sleep the day away in his passenger seat, and then they avoid any meaningful conversation.  Though ostensibly a Good Samaritan, Bruno tells him he doesn’t want to hear his story.  Robert quietly insists that all he is is his story.

They travel through a few towns, where Bruno repairs projection equipment.  They will cross paths with a few characters who tell them a bit of their story, and slowly they bond, though not in any ostentatious way.

It’s a strange kind of friendship, more like one between a boy and a dog found on the street, though at times they each get to play the dog.  I struggle to remember much of their conversation, just that they co-exist in some degree of peace.

In the background of their story, both their own pasts and in the people around them, there is a lot of pain and broken relationships.  Robert, for one, is reeling from his wife leaving him.  Later they will drop through a small town where he sees his aging father for the first time in years.  The old man, feeble and dedicated to a dying newspaper he operates, would seem to command our empathy, but Robert just rips into him for the way he treated Robert’s mother.  Whether he’s really angry at his father or just projecting his own misgivings about his own behavior, who knows.

Another man they cross paths with tells them how his wife wanted out and, feeling stuck, she crashed her car and died.

The film as a whole has a certain innocence, but all this pain is described or hinted at.  Whenever Bruno picks up a newspaper there is a headline about some atrocity.  He never says anything about it or reads further.  It’s as if he’s checking in on the state of affairs in the world like a groundhog looking for his shadow.  He sees that everything is the same and so he willfully retreats back to his truck.

The conversation between the two men eventually gets to Bruno’s stubborn isolation, whether it’s something he does out of pride or fear of getting down in the muck with the rest of the world.  He gets around to admitting he too has desire and that his isolation is a way of coping, at least to some extent.

By the end, though, he will just continue on down the road, headed somewhere and nowhere altogether.  Robert quietly departs, catching a ride on a train, and for a moment the road and the train tracks run parallel, with each catching a fading glimpse of the other until their paths deviate.

Their road trip is something out of a strange fairytale, or maybe purgatory.  The landscape is both peaceful and haunting, like a quiet place for tormented souls to recuperate, or maybe just a cosmic rehab clinic for people to dry out.