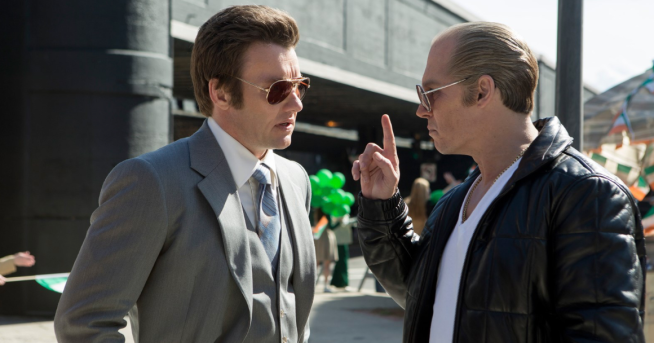 Black Mass is another Boston-set mob movie, this time about Jimmy “Whitey” Bulger (Johnny Depp), a mob boss who cut a deal with the FBI that helped him and the Winter Hill Gang flourish for years.  It follows in the footsteps of Goodfellas and, perhaps even more so, in the shadow of The Departed, with the accents thick and a bit ostentatious (even if authentic), and the espionage almost comical.

The film plays with you a little bit, introducing characters whom we think might carry the narrative for some or all of the film, who are then set aside while we move onto someone else.  We open, for example, on the testimony of Kevin Weeks (Jesse Plemons), who begins to recount his indoctrination into the Winter Hill Gang a la Ray Liotta in Goodfellas.

But then before we know it he has become a narrative afterthought, and the story switches over to Bulger himself before giving way to FBI detective John Connolly (Joel Edgerton), who I think gets the most to do here.

That’s because Connolly has an actual character arc.  He and Bulger were friends from childhood (even though Bulger seems much older), and it’s Connolly who convinces Bulger to cut a deal with the feds not as a “rat” but in order to help pave over enemy mob families.  The deal, it turns out, offers the feds nothing of value and allows Bulger to run rampant through the community.  At one point he and a few others even win the lottery.

Over the course of the film Connolly goes from conflicted but surely well-meaning cop to a straight up mafioso.  He cowers to Bulger and does his bidding, eventually committing crimes that would get him decades behind bars.  His is the most compelling and disturbing narrative arc in the film.

Others, like Weeks and Bulger, are just juicy character roles, the type an actor would love to chew into but which doesn’t offer much narrative momentum.  Bulger is an engaging character even though there is something quite alienating about him, whether it’s the prosthetics or Depp’s unnatural eye color.  He’s rather ghostly, and I believe all of this contributes to a sort of larger than life characterization of the man whom we never really get to know in detail.  He is there to be explained, commented upon and feared by the people in his orbit, be it cops or his enforcers.

The film as a whole works because of the innate appeal of gangster movies.  In many ways this feels like the greatest hits album of a story on an average cinematic Boston gangster.  There’s the excepted violence, scenes where the danger looms too close to home and that scene you always seem to get now wherein a mostly innocent character has easy dinner conversation with the big bad wolf (Bulger), then makes a comment to which the big bad wolf stiffens up and accuses him of something, everyone falls silent, and then finally the big bad wolf reveals that he’s joking and that “you should see your face right now.”

Scott Cooper’s films have always felt a bit unusual to me.  There is a strength of texture and tone, and he’s worked with many a great actor to help bring that to the screen, but something always feels off, like a man pretending to be something he’s not.  Maybe it’s that it all feels so self-conscious, I’m not sure.

But on the surface both Crazy Heart and Out of the Furnace looked like movies I’d enjoy and in both cases something just felt like it was missing.  They both look and sound the way they’re supposed to, but there’s an underlying heartbeat missing.  It’s style over substance, I’d say.

And I think the same applies to Black Mass, only it’s a movie that can live on style alone.  And at any rate the characters here never much ask for our empathy, and so I think the whole thing works because it’s all so delirious and oddly amusing, especially as the problems snowball towards the end.  The only developed character with whom we might have once related is John Connolly, and in the second half of the film he is such a weasel that you delight in his undoing.