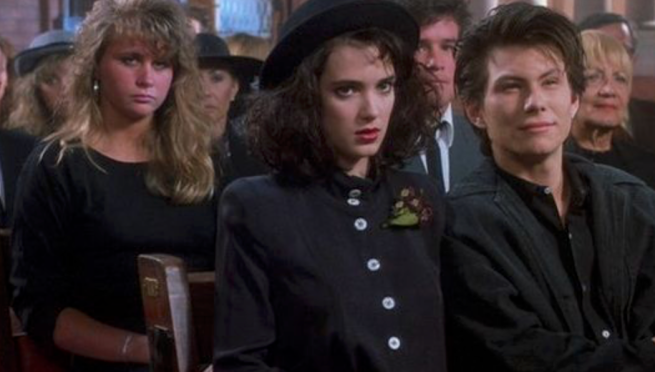 There’s an obvious bit of Bonnie and Clyde to Heathers, but in recent years so too can you find reasons to compare it to Mean Girls (2004), World’s Greatest Dad (2009) and even Invasion of the Body Snatchers.   It’s a strange, dark comedy about a series of murders at a high school which the powers that be are eager to frame as suicides.

It starts when Veronica (Winona Ryder) pairs up with J.D. (Christian Slater), partially over their mutual disdain for the “Heathers,” the three popular girls in school.  Though Veronica is a member of the Heathers, she seems to be involved only for the sake of a long-term anthropological investigation, slowly working in silent to undermine their ways.  As played by Winona Ryder she has an inherent rebellious streak, or something more calculated.  Like in Reality Bites the Ryder character is there to comment upon the people around her, not to join them blindly.

And yet she instead blindly joins J.D., which she herself is aware of in a series of journal entries with the largest handwriting I have ever seen.  Together they kill three people and stage them as suicides, though to help maintain Veronica’s innocence, the story is constructed in such a way that she is made to be unaware that what they were doing was actually murder.  After the third killing she begins to separate herself from J.D. aka the angel of death.

So on that level they are Bonnie and Clyde, finding shared passion in their lawlessness, sticking it to the man, in some sense.  But then there is also the collective character of the entire school.  When the first Heather appears to have killed herself, with a suicide note forged by Veronica and J.D., she is suddenly regarded as a martyr and is more popular than ever.

Then when the same happens for two bullies whose killings are staged as a double suicide, the school again rallies behind them, propping them up in death in a way that betrays who they were in life.

There is something to this, I’m sure.  It works well enough as comedy on the surface, especially in the funeral scene for the two bullies where the idolatry thrown their way is contrasted with them wearing their football helmets in the casket, but it also says something about how death erases much of the nuance of life.

Alive they are flawed, dead they are perfect, possibly just because this is how everyone else (or we) want to be remembered when we go.  But then the plot picks up again and so subtext must take a backseat.  J.D. becomes further unhinged, and Veronica steps up to do away with him.

What a strange movie.  It’s a bit disturbed but fittingly so.  There is some talk of the ‘MTV generation’ and the ways the school student body is a microcosm of life as a whole.  But these analogies and comparisons aren’t left to us to decipher, rather they’re stated right there on the surface, usually by J.D. the philosopher.

It’s a bit of a Gen X movie in that way, which I guess this is a Gen X movie.  It has the engine of such a story, the heartbeat of burnout and regret, though it’s just dressed and painted like an 80s movie.

On the surface it looks the part, with the feathered haircuts and the bright images of an 80s movie, as if shadows hadn’t been invented yet, but with each creeping moment of darkness it reveals its truer, more sinister core beliefs.  Like with the characters of Fight Club or the jaded young protagonists of Reality Bites and their disdain for the mainstream, or the affectionately aimless slackers, the characters in Heathers are either preaching in opposition of the mainstream, the yuppies and the American Dream, or they’re just trying to get out from under its expectations.

Many of the quieter, less absurd moments of the film even feel staged like a David Lynch movie, such as Blue Velvet with its purposefully bland, sterile depiction of suburban life meant to mislead you before revealing the dark underbelly of that community.  There are a couple scenes in Heathers in which Veronica sits down for a brief meal with her two parents.  Her father, the symbol of middle-aged suburban passivity, wonders why he reads cheap spy novels or still smokes cigarettes.  Veronica looks at him in a smarmy way and says, “because you’re an idiot,” before he immediately agrees that she’s right.

It’s these moments that seem to get at the heart of what this movie wants to do.  They are staged like commercials for some brand of teeth whitener or hair product, with the image of a happy family that speaks with the same rhythms as Leave It to Beaver.  But it’s Veronica calling her dad an idiot, and her dad playing the part of a complete fool.  The dynamic mocks a certain image of the nuclear family at this time.  Through their strained smiles you can practically see the rot working its way through their veins, soon to decompose them entirely.

And from that decomposition you have the burnout of the Gen X-ers, the ones who knew neither the trauma of World War II nor the free love of the young Baby Boomers.  They were born behind white picket fences and decided they wanted to get the hell out of dodge.  I think that’s right.