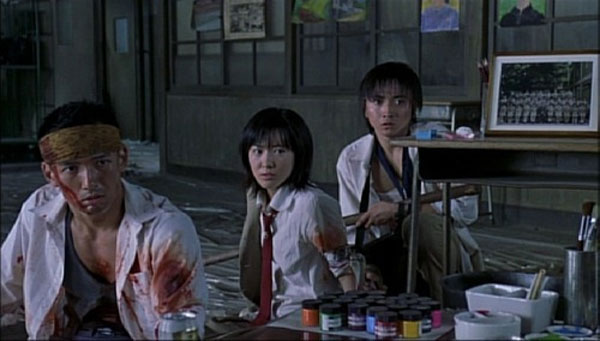 I first heard of Battle Royale after The Hunger Games was released.  From what I understood, Battle Royale was the same as that latter movie but it didn’t hold back quite so much.  And when you start watching this movie, there is a long warning upfront about the the upcoming violence, so I expected this movie to be pretttttttty crazy.

And it’s actually kind of tame, for what I was expecting.  The main characters in this story, Shuya and Noriko, are young lovebirds who stick together, and it’s safe to assume that at some point they will be forced to turn on each other since there can only be one survivor in this morbid game.

Okay, to backtrack, Battle Royale takes place in the future where, because teenagers are so reckless and damn annoying (I suppose), a group of them are taken to an island every year to fight to the death.  The children, however, aren’t strangers to each other.  Instead a school class is chosen, so every kid knows the other.  Over the course of three days, the kids must kill each other with randomly assigned weapons (or whatever they pickup), and if, at the end of three days, no single winner has been chosen, then the collars they all wear will explode, killing them.

The best part of this movie is the first act in which we and the children learn all this information.  The kids, it seems, didn’t know about the law that had been passed to put this fight to the death in place.  They all think they’re on a class trip somewhere, but instead they wake up in a dark room with collars around their necks.  Then one of their former teachers comes out and explains the rules to them.  To make the danger ever present, two of their classmates are killed right then and there.

Most of the battle is seen through Shuya’s and Noriko’s eyes.  After we see a few classmates quickly turn on each other, we wonder if these two can trust each other but it quickly becomes clear they can.  Because these are our protagonists, they don’t choose to kill where other students do.  Well, Shuya gets into a fight with another boy that ends with him getting an axe through the head, but that wasn’t intentional.

The premise of a movie like this or The Hunger Games implies that the main character needs to kill to survive.  It’s really a cop out to have them abstain from killing and yet survive, even if that’s what we would want of our hero.  So I anticipated that the heroes of Battle Royale would still be killers, but they’re not, for the most part.  Instead, where this movie could be completely unhinged, it’s rather tame.

As we witness the slaughter throughout the battle, we are given occasional glimpses into a kid’s frame of mind.  One girl, the most brutal of the bunch, is revealed to have been nearly molested as a child before pushing the would-be molester down the stairs, possibly killing him.  It’s the first time we gain any sympathy for this character, and we receive it immediately before she is killed by another kid, Kazuo Kiriyama, the only one who seems to have a hard on for murder.  This kid is one of two “transfers” who joins the class only for the battle.  Like the other, Kiriyama seems to have survived a previous battle, but whereas the other transfer (who helps our protagonists) doesn’t want to be here, this one seems to have volunteered.

At one point, three students seem to be on the verge of shutting down the battle itself by hacking into the computer system, but Kiriyama guns them down.  We get to the point where, in the third act, the only three students left alive are our heroes and the good transfer student, Shogo Kawada.  This is where the movie always seemed to be headed, with much of the danger now out of the way but the real test only now presenting itself.

It seems like Kawada might already be on the verge of death, but then he appears to shoot our heroes, and Kawada is declared the winner.  Of course, we never see him actually shoot Shuya and Noriko, so we know they’re still alive.  Later in the third act, Kawada approaches the leader of the game, Kitano, but Kitano, like us, doesn’t believe that Kawada is the only one left alive.

It was unclear to me why Kitano would believe Kitano or even pretend to believe him.  Earlier we establish that there is a microphone in the students’ collars through which the powers that be can listen to them, but this was established with other students, so none of Shuya, Noriko, not Kawada would seem to know this.  Kawada, though, has played the game before, so it’s believable that he would know this information, though he leaves the audience out of the loop.

Anyways, when Kitano hears the supposed kill shots over the microphone, he tells his officers to confirm the kill, but it also seems like he would have a better means of confirming the deaths, such as checking the pulse of Shuya and Noriko through their collars.  What we learn, though, is that Kawada has been at this for some time, and he previously (months earlier) hacked into the system and has now disabled his collar along with Shuya’s and Noriko’s tracking devices.  So there is certainly a little suspension of disbelief going on here.

Shuya and Noriko show up suddenly, and Shuya kills Kitano.  On the boat away from the island, Kawada dies from injuries already sustained before this final confrontation, and we end with Shuya and Noriko on the run from the police (because they illegally survived).

As I mentioned before, it seems to me a cop out to let Shuya and Noriko each survive.  The point of a movie like this is to be brutal, extremely brutal, not just in the violence but in what the characters are forced to do.  It’s a “man is the most dangerous game” kind of story, so the protagonist should have to make such a decision.  That said, there are a lot of moments within this movie that act as small climaxes.

Certain characters are forced to shoot someone they love (or have a “crush” on, these are junior high kids after all), or simply reveal their true character.  One student threatens to force himself on another soon before his death, and another student, believing Shuya to be dangerous, tries to poison him only for a friend to eat the poisoned food, resulting her death and a subsequent machine gun standoff that leaves them all dead.  There is plenty of brutality in this after all.

But Shuya and Noriko, once active characters, become very passive in the second half of the movie.  Kawada does the heavy lifting, choosing to save them (for an unknown reason), while also grappling with the guilt of killing the girl he loved in the previous battle royale (after she had shot him).  Kawada has a character struggle on multiple levels, first within himself (guilt), with the other kids he needs to kill to survive (particularly the other transfer student) and with the master of the game himself.  He’s the most interesting character in the movie.

Shuya and Noriko are just along for the ride.  I wouldn’t be surprised to learn that the only reason Shuya shot Kitano in the third act is because the filmmaker realizes he didn’t have enough to do.  In that scene, any of the three characters could have shot Kitano (with a quick rewrite).

In terms of the violence, some of it is hard to stomach, but a lot of it is very cartoonish, and maybe it has to be for a viewer to tolerate this movie.  I mean, we see dozens of students shot, stabbed and blown up, so perhaps the bright red blood, looking more like a juice stain than blood, was a conscious decision.

Throughout this movie, characters constantly seem to be professing their junior high love for each other or asking if another has a crush on them or another student.  I found it incredibly amusing that, even in the face of violent death, these kids would still be concerned with who has a crush on who.  I took it as a sign of these students hanging onto themselves in the face of this madness.  Other kids lost themselves completely and immediately, but the ones who survived only did so because they maintained a willful ignorance of what it means to die.  Instead they focused on the things that got them through school so far, crushes and certain friendships.

The movie ends with a flashback (which we’ve seen a couple times already) of the kids playing basketball, with the boys on the court and the girls cheering wildly on the sidelines.  It’s meant to be a moment of intense happiness, almost the epitome of joy in their young lives, and every character is present.  The moment is joyous and shared, and it’s scored with soft, classical music, meant to make the moment more painful as we go further into the movie and feel how much they have lost.  By the end, we repeat this memory in full, with glimpses of just about every character throughout the story.  Seeing them cheering and playing together, after knowing how far they descended, is striking.  It suggests that, under the surface, these characters are capable of anything.  Maybe it’s meant to illustrate how we hide our true character, or maybe the flashback is simply meant to illustrate the meaninglessness of everything we just saw.  I’m not sure.