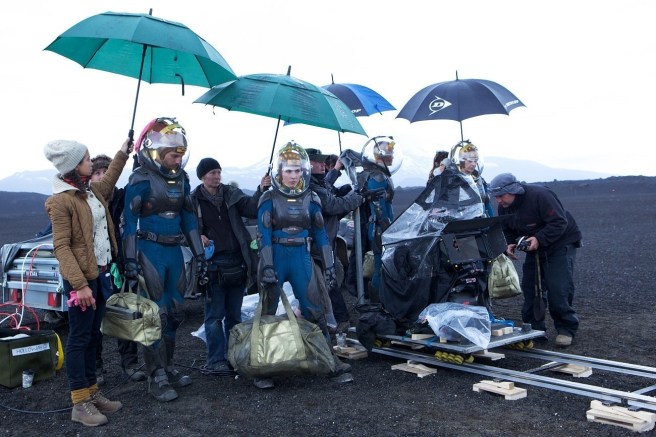 Prometheus is about origins and aliens and an android who is a little too human to function.  I saw Alien: Covenant before I saw this movie, so maybe that messes with how I perceive the two movies, but where I didn’t much care for Covenant, I thought Prometheus was much better than I had been led to believe.

Both movies, unlike the earlier Alien films, are concerned with grandiose questions of life, creation and ultimately death.  The earlier films felt much more like strictly action movies with little room for anything other than trying to survive.  And that makes sense.  So how do you balance a story with the immediate goal of survival and the more philosophical musings about life that Ridley Scott wants in both of these recent movies?  Well the answer is David the android, played by Michael Fassbender.

In the earlier Alien films, the androids were genuinely good characters, but they were able to be programmed to go against the protagonist’s goal, such as Ash in Alien.  In Prometheus, though, David seems evil from the start.  Of course he wouldn’t see it that way.  David is just unconcerned with the humans’ goal of finding their own creator, referred to as the ‘engineers.’

The team of scientists, led by Elizabeth Shaw (Noomi Rapace), find a planet which they believe might hold the answers to the origin of the human species.  Once they reach the planet, things start to go wrong, though not immediately, as you might expect.  Instead they find some pretty incredible stuff, if you’re them, but to the audience it’s not all that incredible.  Look, the engineers are cool and all, but it’s just another sci-fi concocted explanation to explain why we exist.  If we are meant to feel the impact that these characters feel, then tease us a little first with this reveal.

On the planet, the characters are amazed by all this, but David seems somehow the most fascinated with this discovery, even if he’s not meant to be able to feel emotions.  Later David will infect Charlie Holloway (Logan Marshall-Green), causing everything to go haywire.  In most Alien movies, the initial infection feels almost unavoidable because one character ventures too close to something not knowing what it is, and then the aliens attack him and go from there.  But in this case, the infection is planted.  Other characters die on the planet, encountering the aliens the way you might remember from past films, but the architect of much of the madness is David.

Having seen Covenant, this is not much of a surprise, but it is an interesting choice here because David is unlike any other android in the Alien franchise.  Sure, other androids, as I mentioned, are antagonistic, but that’s only because humans have programmed them to be so.  David is an antagonist on his own accord.  Even as everyone declares that he doesn’t have a soul, we see him clearly make decisions from that supposedly nonexistent soul.

And what does that tell us?  Well, I guess David is unconcerned with questions of where he comes from because he already knows.  He was made by Peter Weyland (Guy Pearce), an old, old man who wants to meet the engineers in order to prolong his life.  The question of where we come from completely consumes people like Shaw and Holloway, but David’s behavior, on some level, suggests that such musings are roadblocks to humans doing what humans do, which is destroy things.

Or maybe that’s too simplistic of an idea.  I will say, though, that in all of these Alien movies, despite the destruction done to humans, the humans always somehow feel like the problem.  In all of these different but not so different stories, the humans have ventured deep into the unknown, away from Earth.  We never actually see Earth in any of the movies (at least the ones I’ve seen).  So even as the humans are the ones getting infected, by having them head off into these unsafe planets, it feels like the humans are infecting something that has existed peacefully for years.

In Prometheus, for example, once the scientists enter a particular cavern, they discover that their presence is changing the atmosphere and waking up long dead or dormant aliens.  The point always seems to be that ‘we should not be here.’

And perhaps David recognizes this destructive power of the humans.  He is made in their image, but he seems to hold only complete disdain for looking like a human.  At one point in the movie, David remarks about how it’s normal to “hate your parents,” in reference to David’s feelings towards Peter Weyland, his own “father.”  David, in other words, is just the world’s most powerful, rebellious teenager.

So again, there are a lot of ideas at play here, but like in other Alien movies, any philosophy of the characters is stated quickly up front before the action begins.  That’s because once the aliens attack, there is hardly a moment to sit back and think let alone monologue about what our purpose is on this mission and in life.  Prometheus understands this which must be why the first alien attack doesn’t occur until over an hour into the movie.  There is so much talking and philosophizing in the first half until the attacks occur and we can make what we will of each character’s death based on what we’ve been told about their individual philosophies.

But back to David… he is the only character who is undisturbed by all this because, not only did he orchestrate it, but he just doesn’t care for the humans.  This whole thing is a game to him.

I guess the more I think about it, the more I wonder what the point is of focusing on the engineers and our creation.  We’re given an answer so quickly that that answer feels underwhelming.  It’s found out way too quickly for us to care, so the focus then seems to be on what we do with that information.  Peter Weyland himself gets greedy (or is already greedy), suggesting that humans are a sort of virus, clinging onto anything that will prolong our lives, perhaps.  David must look at the humans in the same way he looks at the aliens.

I really don’t know what else to say about the mythology underneath the plot because I really didn’t care for it.  I will say that the second half of the movie, as the plot really moves forward, was surprisingly entertaining.  In particular you have the scene in which Elizabeth hurries to have the growing alien fetus in her stomach removed, and Jesus I was covering my own stomach the whole time.  Once the movie began to propel itself forward I was along for the ride, it’s just the deliberation at the beginning that completely uninterested me.

It’s at this point you might realize that I’m not the right person to talk about these movies.  I’m just realizing it.  I liked Alien and I thought Aliens was passable, possibly a little over-hyped for my first viewing.  But then Alien 3 was terrible, and I thought Alien: Covenant, like Prometheus, had some nice action, but it was very predictable, and the strained monologues between the two Michael Fassbenders felt very self-indulgent and boring.  The mythology they introduce in this movie is given way too much screen time in this year’s sequel.

But maybe you’re into the mythology.  Maybe you want to know these answers.  If this were Game of Thrones then I’d be on the edge of my seat looking for the answers deeply-rooted in the show’s history.

But again, when I think about why Alien worked and kicked this all off, it’s because of the immediacy of the movie.  Oh shit there’s an alien onboard, we need to stop it but how?  It’s a very condensed, almost intimate movie.  It helped that we didn’t know all the extra stuff about what life was like on Earth in that time period because it didn’t matter.  The point was to understand these characters and their predicament, and I did.  It was hard not to put yourself in Ripley’s situation and wonder what you would do.

But I feel like, starting with Alien 3, the sequels (and now prequels) have relied way too much on bigger questions that don’t matter.  It’s like when a band completely changes direction in their third or fourth album but then still has a few songs in the fashion of their original hits.  They can’t commit to the new direction or staying the course.  That’s how I feel about these movies.  Ridley Scott wants to throw these questions at us, but I think we all know there are no giant, muscular “engineers” behind our existence, so there’s no impact behind the reveal.  And again, I suppose, it’s not much of a reveal since it happens to early in the movie.

I don’t even know how I feel about this movie.  I was entertained, but when the movie ended it felt very conventional.  Why play with these grand ideas if you’re just going to make a summer action movie out of it?