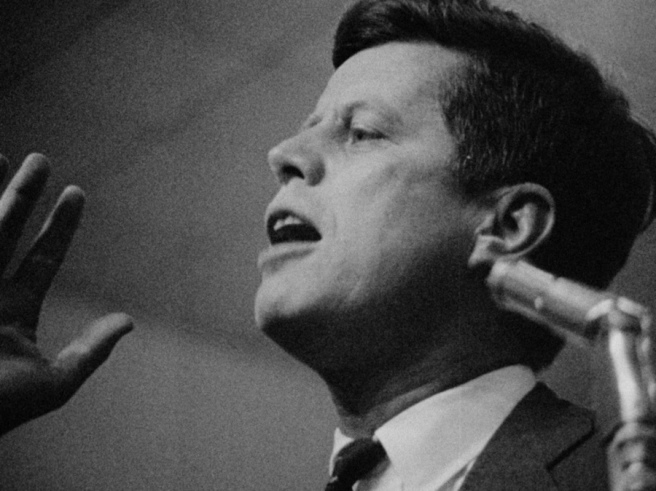 Adventures on the New Frontier was a television documentary produced for ABC in 1961.  It offers a surprisingly candid portrait of President John F. Kennedy as well as First Lady Jackie Kennedy and Hubert Humphrey, the man Kennedy defeated in the primaries before the general election.

Most films or media centered around Kennedy now are focused on his assassination, and if not, his death still seems to hang over how he’s presented, as if there’s a ticking bomb waiting to go off.  And it’s hard not to feel a little bit of that here, but this documentary plays like an after school special in some ways.  It’s innocent and optimistic, meant to offer you a glimpse not of Kennedy so much as the office of the President, whomever that President may be.

In the 50 minute film, we see Kennedy in office and on the campaign trail, and we see him do things from sign autographs for his sister’s kids to recording a voice memo to talking with an advisor about disarmament.  Kennedy chews on the edge of his glasses while he thinks or he gently brushes his hair aside, and it’s hard to imagine that this is really John F. Kennedy and not some kind of recreation of him.

The documentary also heads out to West Virginia to take a look at the struggles of a coal mining town with high levels of unemployment.  Though Kennedy isn’t there, the team interviews the people who supported him.  Kennedy promised to take care of West Virginia, and we see the beginnings of a new work program he has put in place.  One former miner with 8 kids waits in a crowded line looking for work from these new opportunities.

Elsewhere we find Kennedy’s ambassador to Africa where he makes a remark that attracts some heat.  Kennedy is forced to defend the remark to the press (“Africa for Africans”), and you can see him slightly stammer his way through to a response, one that will appease the press and won’t be too declarative.

The team follows Humphrey for a time as well, during the primaries, but this lasts only briefly.  Later we will see Humphrey as the newly appointed ‘whip’ in the Senate.  There is no animosity, at least not presented through this documentary’s lens.  It’s an optimistic view of what it means to be President, and it’s amazing to think how much things would change only a couple years later.

Much of this documentary is almost too good to be true.  Take Kennedy’s inauguration, for example.  We don’t hear his famous speech until the end of the film (for extra inspiration), but instead we sit in the car with John Steinbeck as he discusses how much he liked the President’s speech, more so in terms of grammar than anything else.  He speaks of dangling participles (or the lack thereof) more than he speaks of the content of Kennedy’s speech.

Everyone in the story seems excited and well-prepared for the task at hand.  It may be that this documentary is not necessarily propaganda but a deliberate message that things are going smoothly.  Even with occasional mentions of the threat of nuclear war, the message is always extremely positive, like the narrator is straight from those cheesy 50’s PSAs.

This documentary is mesmerizing for how close it gets you to something and someone that feels so far away, and for a brief moment it might make you want to be President again.