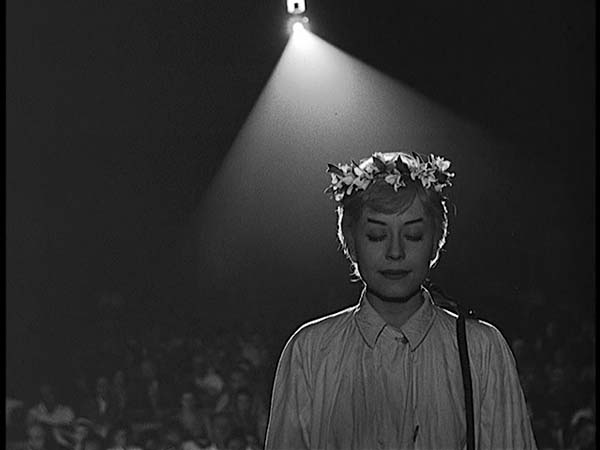 Giulietta Masina, Federico Fellini’s wife, plays Cabiria, an escort looking for a way off the streets.  She is bold, brash, loud, proud and Chaplin-esque.  Between her expressive face and entertaining dance moves, she’s hard not to enjoy just form a visual standpoint.  Those same attributes were harnessed in La Strada (1954) to make us feel sympathy for her character, but here they are more often played for laughs.

In the second half of the film, though, Cabiria becomes a much more empathetic character, and her large, almost mischievous grins will be replaced by tears and looks of utter despair.  Her brashness and performative nature start to seem like a defense against the outside world.  The Nights of Cabiria is about her introspective journey, through night clubs, churches, vaudeville magic shows and sudden love, to find out who she really is.

The film opens in a flat, desert-like landscape.  Cabiria runs around playfully with a a man named Giorgio.  You might think they have been in love for sometime, but when they approach a river, Giorgio looks around for witnesses, then plucks Cabiria’s purse and shoves her into the water.  She can’t swim and nearly drowns except for the intervention of a few local boys.

Instead of thanking them when she wakes up, Cabiria angrily shouts and searches for Giorgio, but she’ll never see him again.  The only thing she can do is burn everything that reminds her of him and move on.  We next see Cabiria in what we learn is her natural environment, hanging out on street corners with other escorts and arguing with one woman who might just be her rival.

Pretty soon Cabiria is dancing with strangers in a mesmerizing way (seriously, her dancing is a lot of fun to watch, with a certain amount of grace but also a Charlie Chaplin-esque series of stilted movements), and these moves often feel inspired but tired, like she’s rehearsed them a thousand times before with a thousand different strangers.

But Cabiria puts on a smile and goes along with it anyways.  Maybe she does enjoy it.  That night she is picked up by a famous director, Alberto Lazzari, and she boasts from his convertible about her good fortune.  All she really wants that night is a signed photo from the man so she can brag to her friends about who she was with.  When Lazzari’s girlfriend turns up, however, Cabiria is forced to hide in the bathroom all night with a puppy that only emphasizes how small and vulnerable she is.

Throughout the rest of the film, Cabiria goes to see the Madonna (in a large, mystifying but enrapturing church crowd), wanders around the ‘caves’ where the poorest of people live, and eventually she finds herself alone, walking into a magic show that she could care less about.  It’s just somewhere to go.

In that magic show she is brought onstage, always the good sport, and under hypnosis she is led to believe that she has met and fallen in love with a man named Oscar.  When she is snapped out of it (even the magician seems to feel a little guilty for misleading her), she is furious and embarrassed.  Under his spell, we see just how innocent Cabiria is at her core.  All she wants is to be loved.

After the show, however, a man named Oscar claims to love her.  He took the magician’s use of his name as a sign from above.  Slowly but surely, Cabiria lets herself be wooed by him.  At first she tells a friend that it’s all good as long as Oscar is paying, but when he proposes to her, she accepts.  Though there is certainly a financial aspect to this (she gets to leave the slums), she does seem to be smitten with the man.

Everything seems too good to be true, especially when we first see them together after Cabiria has left home.  She shows him the money she got from selling all her assets, and Oscar, hidden behind his dark sunglasses, starts to feel predatory, like everything else in Cabiria’s world.

He takes her out to a cliff to watch the sunset, and it’s not hard to imagine what he has in mind.  Cabiria soon recognizes this too and starts to breakdown.  She is hurt not just that Oscar is going to rob her, but that Oscar is going to rob her.  She has been beaten down before, as we have seen, but this is the first time, truly, that she has opened herself up to opportunity.  She let herself be optimistic for a moment, and when she sees his betrayal, she throws him her purse and demands that he kill her.

He doesn’t, and Cabiria is left broken, sobbing on the ground, much like her counterpart in La Strada.  Rather than end the film there, on the lowest of low notes, Cabiria pulls herself to her feet, and she finds herself surrounded by a small group of musicians.  They seem to taunt her, but when we see her starting to smile, their taunts are less aggressive.  Maybe they are trying to lift her spirits, but I maintain that they look as though they have no good intentions.  It’s just that Cabiria has weathered the storm before, and their dancing mockery feels familiar to her.  It’s as if she recognizes the game and recommits herself to playing it as before.

Though Cabiria is ultimately alone, most of the important scenes in this film occur in public gatherings.  There seems to be a theme of ‘the performance,’ whether in a nightclub with all the requisite costumes, or in church with the cries for help or, finally, at the magic show.  We perform not just onstage but also in the audience.  In a nightclub, we are both the audience and the show, typically (assuming we’re dancing), in a church as seen in this film, the audience is the most performative component of the scene, and in the magic show the audience hoots and hollers throughout the act.

All of this is just noise, I believe, and when Cabiria is alone we recognize her extreme vulnerability.  The core of her character is very similar to the character she played in La Strada (constantly picked apart by her betrothed), and it’s very familiar to a few of the young men on the fringes of society in earlier Gus Van Sant films.

These are characters who need protecting but have no one to protect them.  At the same time, part of Cabiria’s journey is recognizing that there are those who are worse off.  Such as in the caves scene, she finds people she knows and expresses surprise that they are so poorly off.  These people, though, remain positive, and it’s clear that this affects Cabiria.

She’s certainly a stronger character at the end of the film.  The story is neatly bookended by robberies, and while at the start she nearly dies, at the end she is able to pull herself back to her feet.