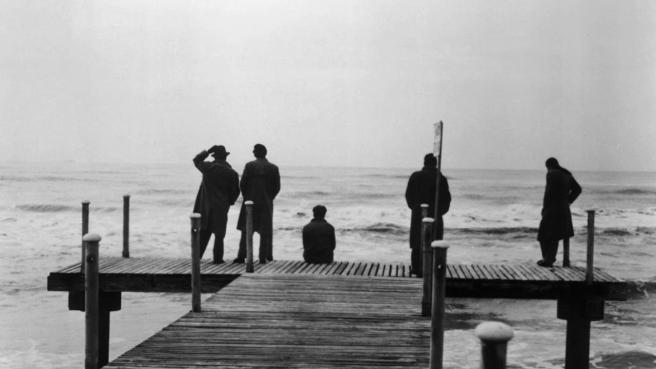 I Vitelloni is like a handful of other college/post-grad movies.  The first one that comes to mind, though probably not the best example, is Noah Baumbach’s Kicking and Screaming (1995).  Each film is a loose collection of stories following a group of friends as they attempt to put their lives together even though it might seem like they’re not trying hard enough.

I Vitelloni starts with the saddest wedding I’ve seen in a movie outside of Riding in Cars With Boys.  Fausto is forced to marry Sandra, the woman he knocked up and was trying to run out on.  His father, however, stepped in and made him stick around and see it through.  When Fausto and Sandra head off to Rome for their honeymoon, the other friends (Alberto, Leopoldo, Riccardo and Sandra’s brother Moraldo) kick cans on the street, wondering what to do.

Fausto seems like the only one of them getting his life together, but we’ll see how stuck in his ways he really is.  When Fausto and Sandra return, they still have the honeymoon glow.  Someone exclaims that he’s back, and another adds “with a mustache!” as if it’s the most unique thing about Fausto.  Sure enough one of the friends grows a mustache too, but then Fausto shaves his.  And though this may seem trivial, which it is, it is a good representation of the rut in which these friends find themselves.

The story always seems to return to Fausto and his struggling marriage.  He constantly lusts after other women, including his boss’ wife which ultimately gets him fired and nearly makes Sandra leave him.  Within this time we follow the other characters and get a glimpse of what they want and what they’re struggling with.

Alberto is fed up with his sister who dates a married man, but at the same time he depends on his sister for money and just about everything.  In one scene he might chastise her and then ask for 5,000 lire.  Eventually his sister, fed up with her relationship with her married boyfriend, leaves town, and Alberto, drunk, is left to care for his mother.

Leopoldo might seem to have the most ambitions of the group.  He aspires to become a playwright, and eventually he has a chance to read his play to a famous, successful actor with interest in a part.  He drags his friends along, but they couldn’t care less about his play.  Fortunately for Leopoldo, he is too excited to notice.  He seemingly pines after the famous actor, following him down dark, secluded, comically windy streets, and the sequence is so drawn out that you know something has got to happen.  Eventually the man makes a asexual advance on Leopoldo, scaring him away.

The story creates a picture of a group of friends too insulated from the real world to have any empathy or work ethic.  They only seem able to communicate amongst themselves, and every other relationship feels based on a transaction or temporary lust.

These are young men who are more boys than men.  They live with their parents, and taken care of, and they have no regard for what it means to make a living.  They’re privileged, in other words.

The film ends with Moraldo finally leaving town, having had enough with their city.  He says that they all discussed leaving, but he’s the only one who ever will.  As he boards the train and says goodbye to a young boy with whom he developed a brief friendship, we see shots of each of his friends, the camera pulling away from them, making clear that he’s pulling away, leaving them in the dust.

In some ways this film feels out of order.  It starts, before the wedding, with a celebration as Sandra is named “Miss Siren of 1953” and ends with a quiet character boarding a train.  The beginning is loud and festive, between the celebration, the wedding and the honeymoon, while the end is much quieter.

There is a reunion between Fausto and Sandra, but you don’t imagine this leading to good things.  Their marriage was on the rocks for reasons that don’t seem to be going anywhere anytime soon.  So even in resolution, the problems persist, and that is why Moraldo has to leave.

At the same time, Moraldo never felt like the protagonist of the story.  Outside of his quiet friendship with a young, hard-working boy, his only role in the story is to stand by and lie for his brother-in-law Fausto.  He does so to his sister in regards to how and why Fausto was fired from his job, and he doesn’t tell his sister about Fausto’s night with a prostitute.  Moraldo’s sins, then, are sins of omission.  Maybe he feels powerless or maybe he’s too sucked into his group of friends to notice the unsavoriness of his behavior.

When Fausto tries to run from Sandra and responsibilities, he asks Moraldo to come with him, and for a moment it seems like Moraldo might.  But then Fausto’s dad steps in and smacks some sense into the boy just as he does later in the film.  Moraldo is never a saint, but the seed is planted in his head to flee, and finally he does in a solemn ending.

As he boards the train, and as the camera pulls away from each of his friends, it feels not so much that he is leaving but that they are sinking, and he’s the only one awake to catch the lifeline to the surface.

“For Federico Fellini, vitelloni were ‘the unemployed of the middle class, mother’s pets. They shine during the holiday season, and waiting for it takes up the rest of the year.'”

This story could easily be told in a much more broadly comic way, and it has been.  In addition to Baumbach’s Kicking and Screaming, which had a serious undertone as well, there are shows like Workaholics and movies like Old School or Knocked Up.  There are coming of age stories and stories about people who can’t grow up.  The first instinct is to mock these people, but Fellini depicts them as if they are infections, rotting the center of a city.

There is a scene in which these friends mock workers they pass on the side of the road while driving a car they could never afford independently.  Then, in a moment of justice, their car breaks down and the workers angrily run after them.

For Fellini, something is wrong with this picture.  These characters aren’t funny, though occasionally they can be.  Instead they need desperately to grow up, and by the end, only one of them does, and from what I’ve read about the autobiographic nature of this film, that person was Federico Fellini himself.