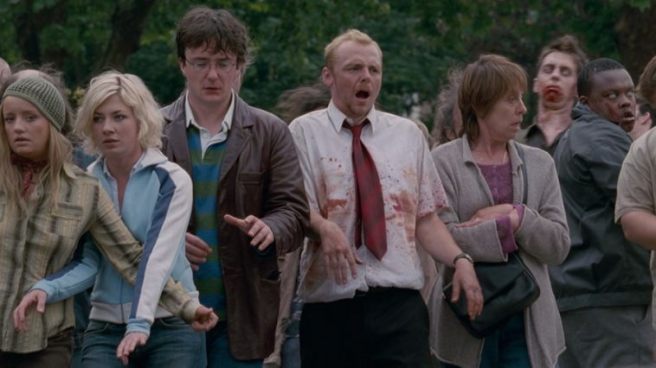 Shaun of the Dead references George A. Romero’s Dawn of the Dead (1978), letting you know that this comedy is about zombie movies as much as it is about zombies.  There’s also another meaning, referring to Shaun, very much alive, as one of the ‘dead,’ suggesting that we’re all a little bit zombified, walking around in a listless daze working the same dead end jobs with the same lack of care about whether or not we’re really living or just existing.

Or maybe it’s just about Shaun (Simon Pegg).  Shaun needs to grow up, and a zombie apocalypse presents him the opportunity to demonstrate to Liz (Kate Ashfield), the girl who recently dumped him, that he’s not such a lost cause.  The first twenty or so minutes of the film establish the relationships between characters that will become important, but they mostly establish Shaun’s lackadaisical attitude towards everything.  He works a not so great job, drinks with his slacker friend Ed (Nick Frost), and he has no ambition whatsoever.  So Liz dumps him.

When the zombie outbreak begins, Shaun remains clueless, stumbling to and from the local store and channel surfing the news before he and Ed figure out what’s going on.  The movie offers plenty of visual jokes in regards to this obliviousness, but once Shaun and Ed put the pieces together, the movie wastes no time in establishing the danger and the way out: kill the zombies by destroying the brain.  Another movie might draw out this detail, letting the characters stumble through the plot before learning how to kill the zombies, but given that director Edgar Wright knows we’ve seen a zombie movie before, he hurries to put the characters on the same page as the audience.

It’s not about figuring out what’s going on, it’s about dealing with a very obvious, easily identifiable danger.  Once Shaun and Ed make their plan (to save Shaun’s mom, his girlfriend and to retreat to the Winchester, their local pub), the movie effectively puts us in their shoes.  Like a lot of people, I’ve often daydreamed about what to do in the event of a zombie apocalypse, and like other day-dreamed scenarios, I enjoy these thoughts.  Zombies, despite being flesh eating, are fantastical, and when we wonder what we’d do when faced with them, we imagine it might be kind of fun.

So while other zombie movies will stress the danger and seriousness of the situation (The Walking Dead), Shaun of the Dead has some fun with the conflict.  The characters in this movie might as well be other members of the movie audience.  They try to figure out a survival plan on the fly much in the same way we would.  Shaun and company throw everything agains the wall to see what it sticks when it comes to self-defense.  They have to use what’s at their disposal, so we see a barrage of attacks that include vinyl discs, cricket bats, poles, billiard cues and guns (eventually).

This movie embraces the fantasy element of a zombie invasion, and Edgar Wright helps heighten the drama as well as the joy of this fantasy through a kinetic shooting and editing style.  The most famous example of this is his extreme close ups shot in a fast-cut montage, like you’d see as an action star prepares for battle.  Eventually we get this type of sequence in the final attack as military personnel arrive at the last minute to the save the day, but we also get this sequence dozens of times, meant to make more exciting moments of less intensity.  It’s as if the way Wright cuts these actions is meant to reflect the way Shaun might picture his life, putting a shine to what is otherwise mundane.

The plot plays out like you might expect.  The group is slowly picked off until only Shaun and Liz remain, and of course they get back together.  The slight predictability of the plot, though, plays into the overall goal of the movie, commenting on the zombie apocalypse genre as much as anything else.

Shaun of the Dead is highly re-watchable, and despite a familiar plot, there are so many moments you’re likely to forget about only to rediscover the next time out.  It’s a movie that, because of this familiarity, you can join at anytime were you to come across it on tv. It’s both comforting because it’s something we’ve seen before and exciting because of its inventiveness.  A moment like the one scored to Queen’s “Don’t Stop Me Now” is hard not to like (a foreshadowing of Wright’s Baby Driver), and the occasional gore keeps you on your toes.

I’m trying too hard to sell you on this, just watch it if you somehow haven’t already.