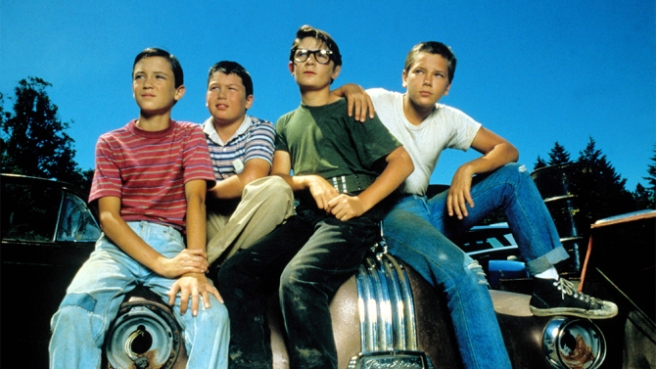 Coming of age stories have been around long enough to be recycled.  Stranger Things (Netflix show) and the remake of It are lathered in nostalgic visions of a time when kids rode around on bikes, free to roam wherever they wanted.  In these more recent adaptations of such imagery, the kids run into a very real danger, but in older films of this nature, the point of this freedom isn’t to undercut it but to explore it.

The stereotype right now is that today’s kids spend all their time indoors playing video games and that kids a few decades ago spent all their time freely exploring the outdoors.  I’m sure the truth lies somewhere in the middle of these extremes, but fictional works tend to romanticize that time when kids were unsupervised and unburdened.  In Stand By Me and a movie like Sandlot as well, the focus is almost exclusively on the children, their parents only making occasional cameos.

Such a dynamic creates a level playing field where the kids can be kids yet see themselves as adults.  We’re not concerned with how much they don’t yet know or how immature they may be.  Instead the point of a coming of age story is to explore a child’s misconceptions of and feelings towards the world before they learn a little too much and figuratively lose their baby teeth.

In movies like these, the characters lose their innocence in some way and come to see the world for what it is.  In that process they become hardened, a little more prepared for a certain worldly callousness they didn’t previously know existed.  This loss of innocence, at least in Stand By Me, is the destruction of myth.

Stand By Me follows a group of four boys, all around the age of 12, in 1950’s middle America.  When they hear of a dead body just off the train tracks, deep into the forrest, they make a plan to find the body, hoping to become famous for the discovery.  The story of this dead teenager is the first of many stories they’ve heard and build up in their heads, only to learn that the reality is much different.

Of the four boys, our protagonist is Gordie (Wil Wheaton), who grows up to be a writer (played by Richard Dreyfuss).  Adult Gordie reminisces about this trip, and the entire story is told through this nostalgic perspective.  The story is based on a Stephen King novella (“The Body”), and like many King works, the protagonist is a writer (as in The Shining, Salem’s Lot, 11/22/63, etc.).

Having adult Gordie be a writer gives him a sort of prescience regarding the events of this story, even if kid Gordie and his friends are woefully unprepared for what they will find on this journey.  Dreyfuss’ narration helps establish this tone which celebrates the boys’ innocence and immaturity, almost as if adult Gordie wishes he could have it back.  His story, written about the events of this story, end with, “I never had any friends later on like the ones I had when I was twelve.  Jesus, does anyone?”

This frame of reference sets up a story that celebrates the boys’ youth.  We know right off the bat that one of the friends, Chris Chambers (River Phoenix) has died.  Gordie reads the headline before we meet the kids, and this colors the way we see the kids’ interactions.  If it wasn’t already crystal clear, we know that there’s no going back.  Gordie might as well be eulogizing his friends and this time in his life, and the knowledge that one of the kids has died helps put us in Gordie’s shoes, making us feel exactly what he feels.

Now, this is where I start talking about myself.  Stand By Me has always felt a little legendary.  I don’t know when I first saw it, but I was a kid, and I had vague recollections of various scenes in my head, just enough to make the whole thing feel like some kind of dream I’d had or even participated in.  I’m familiar with all of the actors, and though I didn’t know it was Jerry O’Connell or Wil Wheaton who starred in this, I knew the actors would go on to have varying degrees of success, enough to keep them somewhat relevant in the public eye.

Of the four leads, O’Connell and Wheaton have had the most long-term success.  I say that more in reference to the fates of the other two actors, River Phoenix and Corey Feldman.  They both feel like lost souls, similar to how George Harrison and John Lennon are no longer around from The Beatles.  River Phoenix died at age 23 from a drug overdose, and Corey Feldman, well he’s still around, but he hasn’t had an easy go of things.

Knowing that Phoenix died and that his character died, I couldn’t help but connect the two, making the movie seem larger than life, kind of foreboding like it had a connection to reality and the fates of the actors involved.  It’s like the Poltergeist curse, in other words.

So before I finally sat down to watch this movie as an adult, I felt like I was watching something as ingrained in our culture and my psyche as a personal memory, and the thirty or so years since the movie was released feels like it might as well be a hundred.

The film itself is much more unspectacular than I recalled, though no less enjoyable.  The performances are great, and the larger than life quality of the stories the boys repeat to each other is both relatable and charming.  Like in The Sandlot, the boys over exaggerate stories of the local junkyard dog, and in both instances they learn that the dog is completely harmless.  As Gordie narrates, this was the first myth he witnessed crumble apart.

Many of the scenes in the film, like the junkyard dog to the boys, felt mythic over time.  There’s the scene of the boys running across the elevated train tracks to beat the oncoming train, the scene in which they find themselves covered in leeches, the night Gordie tells them one of his stories and the final climax with a group of older boys who insist on causing trouble.  These memorable moments stand out over some of the quieter ones, including flashbacks I had no recollection of, featuring Gordie’s deceased older brother, played by 80’s legend John Cusack.

These quieter scenes are more riddled with cliche and melodrama.  Gordie’s father prefers his brother, at least in Gordie’s eyes, and in a nightmare Gordie envisions his father telling him “it should’ve been you” who died.  When you remember that this is all from Gordie’s perspective, it paints a clearer picture of his subjectivity of the story.  His father, an almost cartoonishly abusive father, only seems that way from the boy’s vantage point.  His brother was surely not so saintly as he made him out to be, and his father surely not quite so horrendous.

In this story, about a character nicknamed “Lardass” and a pie eating contest, everything is over the top.  Lardass is remarkably large, and the people around him are remarkably mean.  It’s only this over the top, of course, because this is a story written by a twelve year old.  This moment serves to remind you that the entire film is filtered through Gordie’s perspective.  Even though we meet adult Gordie who tells the story, he’s the one celebrating this childhood innocence, thus giving weight to his childhood perspective as opposed to disowning it.

Eventually the boys reach the dead body.  They’re not as gleeful when they finally see it in all its swollen, rotting glory.  The body is the last myth to be broken.  After a brief standoff with the villainous older teenagers (led by Kiefer Sutherland), the boys give up on their idea of fame, leading the police to the body through an anonymous phone call.  Along the way they grow and develop as characters, including a few emotionally-charged moments that you have to think would be hard to accomplish with child actors.

This film is so engaging because it lets us live out a nostalgic dream in which nothing really matters, and all we have to follow is our curiosity.  Though there is a plot to this story, it feels like very little happens.  Most of the momentum is internal, so on the surface the story is very quiet with the occasional memorable set piece.

I guess it’s like The Odyssey in some ways.  The kids’ journey takes about two days, but it seems even longer.  By the end they’re tired and hungry, but the movie reminds us that their world is a small one when the angry teenagers show up in a matter of minutes simply because they have a car.

This is like that moment, at the end of a movie, when the camera cranes back and up, away from the action (like in the end of Chinatown).  This type of shot shows us that this story is a small one, just one of many going on in the world.  In Stand By Me, this pulls us out of the kids’ small world for a moment.  It’s a bit shocking to see blond-haired Kiefer show up so suddenly while these kids have been marching for hours, but it’s just one more moment in which reality trumps fantasy.

In the end, adult Gordie’s narration tells us how life moved on and they all lost touch with each other.  He doesn’t mourn this outcome, but rather comments on it as if it’s a given.  That’s just how life works.  This was one of the final moments in Gordie’s life before his world expanded beyond the walkable limits of his small forrest town.

I think stories like this are so well-received because everyone longs for a time like this, when the world felt much more intimate and accessible.  Your concerns only dealt with what you could see, and what you could see wasn’t further than walking distance away.

The spiritual sequel to a movie like this is something like The Big Chill, or any movie where a group of childhood friends, now all grown up, get together and reminisce about once was.