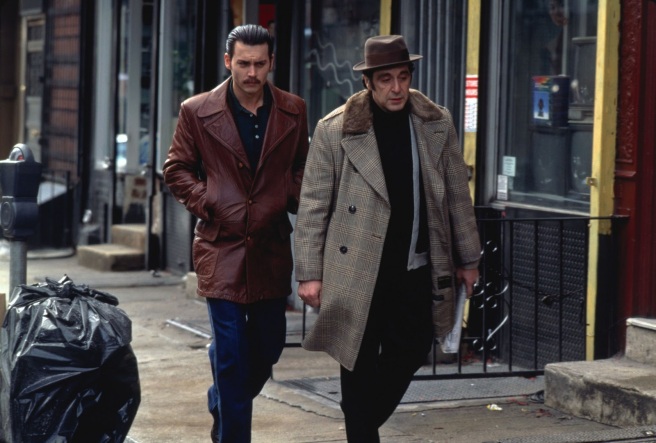 Right up front, Donnie Brasco insists this is based on a true story, in big, bold text, but it’s easy to forget all about that by the time the movie ends.  While it’s an entertaining film, Donnie Brasco just feels like another mafia movie, not as good as The Godfather or Goodfellas, but probably no worse than, say, The Untouchables.  Actually, The Untouchables is a pretty good point of comparison for this movie.

Both deal with the mafia, but through the perspective of a clean-cut hero.  In that case, Kevin Costner’s Elliot Ness, and here it’s through Johnny Depp’s FBI agent, Donnie Brasco.  This lens allows the movie to experience the glamour of a mafia movie, with all its violence and peculiar charm but without claiming to find joy from such a depiction.  The heroes of both of these movies are unwaveringly good.  Sure, Donnie gets a little in over his head, but he always wants to do the right thing.  In a film like The Godfather or Goodfellas, Casino or even Scarface, the protagonist is defined by something like power lust.  The degree of their ‘goodness’ doesn’t matter, because that’s not what matters in their world.  Those films deal with the fall from grace as much as the rise, and that fall is enough to tell you that the film doesn’t intend to glorify their actions.

Donnie Brasco is very concerned with Donnie’s goodness.  He’s meant to be likable, and it’s never in doubt whether or not you should root for him.  Even when the FBI starts to think Donnie is in over his head, we are meant to understand his point of view.  That’s because this film is about the friendship between Donnie and Lefty (Al Pacino), a mobster who takes him under his wing.

The story never really lets us know how Donnie successfully infiltrated the mob.  Sure, we see Lefty meet him and become his mentor, but from the very first scene, people already know who Donnie is.  So Lefty thinks he can trust him, and eventually he vouches for him.  It’s safe to assume that there must have been a lot of leg work that went into Donnie owning whatever reputation he has.  You can’t just show up undercover and get inside, you’ve got to hang around the edges long enough for people to get to know you.

To my surprise, Donnie is able to go home some nights, a short drive across the river, to a family you’re not supposed to realize he has.  This is where the film starts to strain plausibility, because it makes a job as dangerous and consuming as being an FBI informant, feel like a 9 to 5.  Donnie’s wife isn’t happy with how little she sees him, but it’s hard to care.  This part of the story feels very formulaic.  I also still can’t understand how we’re supposed to believe that Donnie lives this undercover lifestyle and still makes it home at night.  That seems likely to blow one’s cover.

And I suppose this family life does become harder to hold together as he gets deeper into the mob.  The point of the story is to show the strain this commitment to his job has on his home life before eventually showing how he may have lost himself in this lifestyle.  Again, this aspect of the film feels worn out even when we first meet his wife and figure out where it’s going.  What’s most interesting about this movie is the relationship between Donnie and Lefty.

In some ways, Pacino and Depp look alike.  Maybe it’s because Donnie feels like a young Pacino character, perhaps Michael Corleone at the beginning of The Godfather.  Both characters abide by a code.  They are calm and collected, thinking rather than acting, and we’re meant to root for them.  In The Godfather, of course, Corleone loses himself in the family business, becoming a version of himself he never would have imagined he’d become.  In Donnie Brasco, Donnie goes down a similar path, but because this movie insists on giving us a thoroughly “good” hero, Donnie never does lose himself.

Lefty is an experienced criminal, responsible for the deaths of 26 people, according to his estimation.  He’s both proud of his work and quietly thoughtful and shameful of what he’s done.  Early in the film he seems convinced he is going to be killed, and he walks to what might be his death anyways.  He’s tired, and he’s apparently ready to die if that’s what’s in store for him.  So Lefty is a criminal, but unlike most criminals depicted in movies, he accepts the inevitable consequences of his actions.

From a quick search over Pacino’s filmography, Donnie Brasco seems to be his final mafia film.  He acted in the three Godfather films, as well as two De Palma gangster flicks, Scarface and Carlito’s Way.  In the latter of those films as well as this one, he plays a tired gangster, no longer consumed by the lavish lifestyle.  All he wants is to be done with it.

In Carlito’s Way he wants to live a straight and narrow life, and here he might want to do the same, but his character is too old and tired to try to get out.  He can see the walls rising around him, and he senses that the only way out is death.

So it’s interesting to look at this film as the end of an era for Pacino.  His character here is compelling, but he’s out of energy.  In some scenes he’s almost forgettable, not because of the performance but because of the nature of the character.  He’s wasting away and symbolically handing off the torch to Depp.

Donnie Brasco for Pacino is like Unforgiven for Clint Eastwood.  That 1992 western was the last hurrah for Eastwood as a cowboy, a character type that gave him his fame.  In that film, Eastwood is older, weaker, more withdrawn.  His character is defined by his fatigue, and though he summons up the strength for one final showdown, he’s too old to life that lifestyle anymore.  Unforgiven, I suppose, showed us that all things come to an end.  Tony Stark can’t be Iron Man forever, you know.

So Donnie Brasco does the same thing here for Pacino.  Lefty is slowly sinking, whether he knows it or not, and it seems he does.  Where past Pacino gangsters seemed oblivious to their own vulnerabilities and consumed by coke habits and their power lust, Lefty is unique because he senses the end coming.  And almost by definition, mobsters do not think ahead.  In every mobster film, we watch them rise to power and then get blindsided by the fall.  In each of these films, many of them bookended by some kind of narration, the characters distance themselves from us as they describe the unforseen fall from grace, even as we have long anticipated that fall simply because we’re familiar with the genre.

Lefty is a character who seems to know how things will end even before this movie begins, and in that way he’s more prescient than we are.  At the same time, Lefty isn’t special.  He’s still a man that has killed 26 people and shows no remorse for it.  On one hand, I wish all criminals could be that thoughtful, but such thoughtfulness hasn’t changed anything at all.  Lefty still played the game.

So maybe crime, here, is the common denominator.  When it comes to lawlessness, we’re all the same.  The central mystery of the story is meant to be the degree to which Donnie has lost himself in this mafia lifestyle.  If someone like Lefty could go to such violent lengths, maybe Donnie could too.

But the movie tells us that Donnie wouldn’t do that, he only cared about his pal Lefty.  And I think that devotion to Donnie’s goodness makes the film suffer.  Sure, the film is based on a book written by the real Donnie Brasco, but that might mean the story holds him in too high of esteem, celebrating his heroics while only pretending to dive into the ethics of his decisions while undercover.