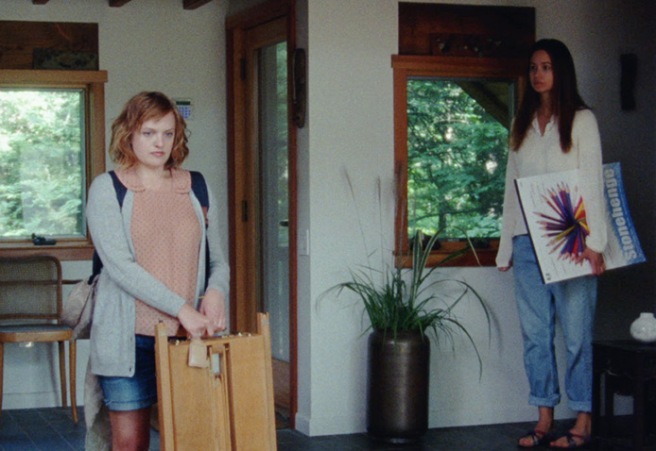 Queen of Earth opens and ends with an intense close up of Elizabeth Moss’ face.  In the opening, she is distraught, on the verge of breaking down, and in the end she is laughing hysterically, having already broken down.

Alex Ross Perry tells a painfully intimate, even claustrophobic story about mental illness. His film borders on over the top, and some might find that off putting.  That’s because Perry examines Catherine’s (Moss) mental anguish but soon enhances it until the film becomes a thriller, possibly exploiting that mental illness as a movie trick.

In Queen of Earth the camera lingers close to its subjects, invading their space and immersing us in their world.  It’s a small story about the friendship between Catherine and Virginia (Katherine Waterston), told over the course of five days at Virginia’s wealthy parent’s lakeside cabin.

The distance between them only grows as the story chugs along, and in conjunction with a handful of flashbacks from the summer before, we see how far Catherine has fallen.  Dealing with a breakup and the death of her depressed father, Catherine is a bit of a miss.  At first her melancholy feels relatable.  It compels her and Virginia to get into arguments that are painful to watch but feel connected to a long-term friendship.  Soon those squabbles become more severe, and Catherine’s mental state begins to deteriorate until this feels like a horror film.  Like in other films that play with the possibility of the protagonist’s insanity, we don’t know if Catherine is in danger or if she is the danger.

I went into this film expecting a realistic personal drama, not the heightened thriller we get by the end.  The horror movie-esque music is consistent throughout the movie, and it’s unsettling but effective, underlying every glare between the two friends.  This foreshadows the movie’s journey into horror territory, but I think it works more effectively if the movie never went there.  Once we get to the “is she crazy?” part of the story, the music no longer stands out because it’s what we’d expect for this type of movie.

The first half of the film is creepy and unsettling, but it all feels plausible.  The music, and the film’s tone help place us in each character’s perspective.  Maybe our lives aren’t this dramatic, but sometimes they feel this dramatic.

And then the film might lose half of its audience as it delves into Catherine’s insanity.  Her father was depressed, and it’s very possible that he took his own life, though it’s left unsaid.  Catherine, newly single, struggles to be on her own, and multiple other characters point out that she’s always been painfully codependent with other people.  So even as Catherine is struggling personally, the film keeps her character honest, suggesting that her struggles were inevitable considering her codependency wasn’t sustainable.

At first, we’re balanced between Catherine’s and Virginia’s perspective.  This helps us empathize with each of them but also finds reasons we might not like them.  They’re messy, but they’re human.  Later, Virginia is all but forgotten, and Catherine becomes a shell of herself.  Is the film taking Catherine’s side?  It’s at least putting us in her headspace, and though I wasn’t a huge fan of the thriller component of this film, I was genuinely terrified in a couple moments.

To take a step back, Queen of Earth feels familiar if only because it’s one of those ‘a group of people spend a week in a cabin’ types of films.  Because of the single location, films likes these can be shot for cheap.  They’re often horror films (Baghead, Hush), either that or melodramas (Your Sister’s Sister).  Queen of Earth is a little bit of both.

The first half of the film is engaging because it raises a question we want answered.  What happened to Catherine’s and Virginia’s friendship?  These are people who, from the start, seem to make each other’s skin crawl, and yet they claim to be best friends.  You get the impression that something sinister has happened or will happened, and that’s conveyed all through atmosphere.  Queen of Earth, I suppose, is a film about atmosphere.  Whether it’s the music, the tight close ups or the often silent performances by Moss and Waterston, everything is there to make you uncomfortable.  And it works.

The payoff isn’t as great as the setup, but the setup is pretty intense, and I think this film is a good one just because of how unsettled it made me feel.  Another version of this story might make Catherine into a psychopathic killer, and Queen of Earth almost gets there.  I can’t quite describe why the slow push into Catherine’s psyche worked on me.  In one dramatic dinner sequence, Catherine gives a long monologue to the neighbor Virginia is seeing in which she tells him that he’s the reason for her depression.  It’s a very sinister speech, and the camera never cuts away from Moss until it’s over.  It’s not far-fetched, given what we’ve seen by the point, to think that she’s talking to no one at all.

The film makes an effort to depict Catherine’s instability, and there are a couple scenes in which we’re not supposed to know if what she sees is really there or just all in her head.  This type of story is already a bit sensational, but Perry tries to ground it, showing us that this type of illness is real, and it’s out there.

After Catherine’s speech, she moves to get up from the table, and Virginia lunges for a nearby knife to prevent Catherine from grabbing it.  Showing Virginia’s fear is as effective as showing Catherine’s potential for violence.

Other cabin in the woods horror films make sensational the potential for violence, but Queen of Earth makes sensational the suspicion that your dear friend is capable of horrible violence.  Or something like that.  I’m not really sure anymore.

Queen of Earth doesn’t have a satisfying ending.  Nothing is wrapped up neatly or explained to us.  It starts with Catherine’s crying face, unsettling us from the start, and it ends with her face in a way that makes us even more unsettled.  Catherine’s manic laughter isn’t that of someone who has overcome her demons but someone who is under their spell.

This type of movie could be a delicate personal drama or a heightened suspense thriller, and it tries to be both.  Half of its audience won’t mind, but half might feel betrayed by such a transformation, as if the dive into Catherine’s psyche betrays the engaging drama between her and Virginia.  By explaining away Catherine’s shortcomings due to her insanity, the film undercuts those shortcomings in the first place.  I wanted to know how these two friends became friends and how they would repair the damage that had evidently been done.  Instead the movie suggests that it doesn’t matter why they’re friends, and there is no repairing this because it’s not about the friendship, it’s about a haunted, mentally ill woman losing her mind.