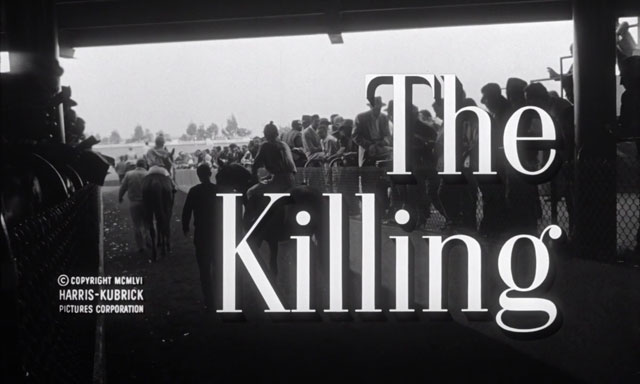 The Killing is Stanley Kubrick’s third film and, as Roger Ebert already noted that “few directors seemed so determined to make every one of his films an individual, free-standing work. Seeing it without his credit, would you guess it was by Kubrick? Would you connect ‘Dr. Strangelove’ with ‘Barry Lyndon?’

The story follows Johnny Clay (Sterling Hayden) as he puts together a team to rob a race track a la Danny Ocean in Ocean’s Eleven.  The subsequent heist is told through multiple vantage points, with overlapping moments in time before all goes to shit.

It’s a fairly straightforward heist movie though told with a nice touch.  Kubrick moves the camera in measured ways, often settling on long takes or scenes that would seem to play out longer than necessary.  These individual choices add up to something, but I’m not quite sure what.  It doesn’t feel mailed-in by any means, though this is just a genre picture from a director who would go on to prove that he could subvert or transcend several different genres.

What Kubrick does here must be some kind of commentary on the type of film he’s making, though all I can tell is that he’s a guy who mimics what any genre move tries to accomplish and does it better.

The Killing is a very influential movie, at least on certain filmmakers.  Quentin Tarantino has cited it as an influence for Reservoir Dogs (1992), and Christopher Nolan payed homage to the film during the heist at the beginning of The Dark Knight (2008), using the same mask used by Johnny Clay.

The story is dark, a noir basically, with damaged characters including the femme fatale archetype.  The wife of one of the men participating in the heist, Sherry Peatty consults the man she’s having an affair with, Val, about robbing the men who rob the race track.  This works less as suspense and more as a sudden surprise.  The discussion preceding the heist and the hold up following it are bookends to the robbery which mostly goes down without a hitch.

This, an observation from Roger Ebert, “Perhaps a motif can be found in the movie’s storefront chess club which, I learn, Kubrick frequented as a kid. His gang leader Johnny Clay (Sterling Hayden) goes there to meet a professional wrestler named Maurice, played by a professional wrestler named Kola Kwariani. Maurice is big and strong and is needed to start a fight at the race track bar to divert attention during the heist. Like all the members of Johnny’s team, he has no idea of the overall plot. He just knows his role and his payoff, and knows Johnny enough to trust him.

The game of chess involves holding in your mind several alternate possibilities. The shifting of one piece can result in a radically different game. Johnny Clay has devised a strategy seemingly as flawless as Bobby Fischer’s “Perfect Games,” but it depends on all the players making the required moves on schedule. If a piece shifts, everything changes, a possibility Johnny should have given more thought to.”

The plan involves shooting one of the racehorses, causing a distraction with a bar fight and finally Johnny Clay committing masked, armed robbery before shipping the money out the window to a waiting man impersonating a police officer.

When Val holds up the gang, Sherry’s husband, George, opens fire, and in the resulting shootout everyone is killed or fatally wounded.  Johnny arrives at the building in time to see George stumbling and bloody, and he heads straight for the airport with a large suitcase full of the stolen money.

George makes his way over to Sherry to confront her before shooting her dead.  Then George himself dies while Johnny makes a run for it.

In a long scene, Johnny tries to plead with a desk agent to let him carry the large suitcase onboard the plane.  They insist that it’s much too big and must be checked.  Considering he ultimately gives in, the scene plays out for a long time while they bicker back and forth.  It’s in this scene that the noir elements take a back seat to the more mundane, almost slice of life comedy of the moment.

While waiting to board the plane, Johnny observes the man driving the luggage cart swerve out of the way of a loose cat, spilling all the luggage including Johnny’s suitcase which flings open, spilling money out all over the runway.  Soon after he’s arrested, his final line being, “Eh, what’s the difference?”

So crime doesn’t pay.  The Killing is about an incredibly well-run heist, with many moving parts that mostly goes off without a problem and even survives the intervention of a gun-toting thief.  And yet, Johnny doesn’t get away with a damned thing because of a broken suitcase latch and a loose cat.  The point would seem to be that what you really need is a little bit of luck.

The final sequence of the film, Johnny’s downfall, is almost completely separate from what came before it.  That means that what does him in is on only introduced right then and there.  There is no long-simmering payoff to a setup early in act 1.  Everything Johnny planned for worked, well for the most part, and the reasons his plan fails is just because it’s too good to be true.

The film stands out because no scene ever feels treated as purely expository.  We deal with familiar archetypes and plot points, but Kubrick chooses to focus on certain moments, like the bickering over the suitcase or the elaborate, almost Chaplin-esque bar brawl which is meant to serve as a distraction so Johnny can rob the track without police involvement.

In some ways this is a comedy, at least the second half of the film, and certain characters, like the meek George Peatty, feel like they’re straight out of a different movie.  George is a push over, and he’s desperate to please a gold-digging femme fatale of a wife.

The rest of the cast and crew of the track heist are much more stoic, almost blending together as if they’re a single entity.  The leader of the pack, Clay, is like the silent wolf leading the way.  He never feels overtly evil or charismatic or anything with a point of view until the end of the film.  He’s just a silent, blank slate of a leader, but in the film’s climax he becomes something much more horrifying with that mask, and in the final moments of the film he becomes a sad sack of a man.